Straight to the roots of the matter
Jawbone – Jawbone 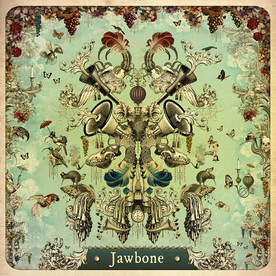 If you had no information or background on the four-piece band called Jawbone and their self-titled debut album you’d be forgiven for thinking you had stumbled across a previously unreleased, American Roots 'n' Blues album from the late 60s or early 70s, featuring musicians from The Band and Little Feat and supported by Louisiana session men for added gumbo appeal.

The fact of the musical matter however is, first of all, it could never be an unreleased album because no album this good would ever remain on the studio shelf.

More importantly, and requiring a double take at the credits and press notes to make sure you read and heard it right, Jawbone are a brand new, London based band that started out as a songwriting collaboration between Paddy Milner (keyboards, lead & harmony vocals) and Ten Years After front man Marcus Bonfanti (guitars, lead & harmony vocals).

The pair then combined with accomplished and respected rhythm players Rex Horan (bass, harmony vocals) and Evan Jenkins (drums percussion) to form Jawbone (named after a song by The Band).

That Jawbone were a bit special even before their debut album was ready to rock and rootsy roll out the studio door is highlighted by the fact they were chosen to back Eric Clapton, Van Morrison and Tom Jones at Paul Jones' sold out charity show at G-Live in Guildford earlier this year (and to great acclaim).

Tracked live with minimal overdubs at London’s State of The Ark Studio (using the famous EMI desk originally installed in the Pathé Marconi studios in Paris), benefiting from an uncluttered and beautifully balanced mix by Nick Portman and given a final bounce to tape for analogue warmth, Jawbone is as impressive sonically as it is in song strength.

'No Traces,' the first song Marcus Bonfanti and Paddy Milner wrote together, is, fittingly, also the first song on the album.
An alternating vocal, gumbo-esque blues on being betwixt and between ("heaven doesn’t want me and the devil doesn’t know who I am"), 'No Traces' is a smooth, classy and lazy drawl of an introduction to Jawbone the band and Jawbone the album.

Following track 'Get What You Deserve' takes a different vocal tack by putting a tight, two-part vocal harmony lead (the raspier voiced Marcus Bonfanti and cleaner toned Paddy Milner blend with, and complement, each other's voice perfectly) over song that’s one part funky, one part rootsy.

Contrast is then provided by the delightful keyboard-led blues, 'When Your Gun Is Loaded.'
A number that wouldn’t have been out of place on an album by The Band, the song’s title is a humorous, word-play nod to those days you seem to be forever shooting yourself in the foot ("when your gun is loaded don’t point it at your feet").

Clever lyrical word-play, dual meanings (the rootsy-blues of 'Family Man' could be about an unwanted role in the Italian Mafia or the restraints of regular family life) and observational lyricism are recurring themes on Jawbone – the latter trait to the fore on the western styled 'Bet On Yesterday,' a song that came from Paddy Milner’s espying of an elderly, world-on-his-shoulders looking gentleman and what wrong turning may have transpired in the past to create such a worrisome present day.

The pun and fun filled 'Rolling On The Underground' (which drops in as many London tube station names as possible) is built atop not the underground rails but the groove Rex Horan and Evan Jenkins provide.
Another London inspired number, 'Big Old Smoke,' is the rock 'n' rolling Stonesy Jawbone.

'Sit Round the Table' is a delightfully nostalgiac, memory-laden ballad that shines through its understated arrangement and harmonies (Rex Horan adds a third voice to many of the songs) while 'Two Billion Heartbeats,' with a cleverly crafted lyric on the finite number of heartbeats each individual may possess, is a love song that marches to a different beat (pun intended).

Late night reminiscing number and album closer 'The Years Used To Mean So Much' carries a personal lyric derived from Paddy Milner’s childhood and upbringing; the song (another that could well have been by The Band in a different time and space) is framed in such a way however as to allow any listener to get equally nostalgiac.

Individually respected, each member of Jawbone has performed, recorded or worked with a veritable who’s who of notable artists that would hurt your own Jawbone to recite the full list (but as a starter for ten say hello to Tom Jones, Eric Clapton, Jack Bruce, Van Morrison, Robert Plant, Dave Gilmour, Cliff Richard, Ginger Baker, Ronnie Wood and Phil Manzanera).

Collectively, Marcus Bonfanti, Paddy Milner, Rex Horan and Evan Jenkins have fashioned an exemplary debut album of well-crafted and consummately played songs that’s as fresh, vibrant and warm sounding as it is an old-school homage to some of the best that ever plied their rootsy, blues trade – and that ain’t just jawin’.