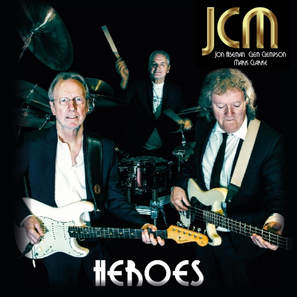 When Jon Hiseman closed the book on Colosseum following the band’s farewell concert in February 2015
no-one could have foreseen another Colosseum related chapter (albeit an all too short one due to the most tragic of circumstances).

In 2017 the virtuoso drummer decided to put a new band together to record songs associated with fallen comrades he had worked with through his illustrious and at times truly ground-breaking career (the idea itself inspired by the sad loss of Jon Hiseman’s ex band-mates and fusion guitar luminaries Larry Coryell and Allan Holdsworth within two months of each other).

Deciding it should be a band in the style of the classic British guitar-led power trio Jon Hiseman invited Colosseum alumni Clem Clempson (guitars, vocals) and Mark Clarke (bass, vocals) to join him; thus JCM were formed and the trio recorded Heroes, an album dedicated to a number of fallen greats in rock, fusion and jazz that Hiseman, Clempson and Clarke had worked with individually or collectively.

That a Colosseum number should feature on Heroes is no surprise given the band was Jon Hiseman’s crowning achievement and Clem Clempson and Mark Clarke's near twenty-five year tenure as members.
It's also a fitting nod and tribute to the band's original saxophonist, Dick Heckstall-Smith.

However it’s a testament to the JCM musicians’ myriad of other band projects and associations that only one Colosseum track features; the outright winner in number of tracks chosen is Jon Hiseman’s Tempest, a short-lived but highly notable fusion outfit from the early 70s that included Mark Clarke.

Three Tempest tunes feature – the bluesy and rocking 'Strangeher' (here substituting swing for the fusionistic punch of the original, which featured Allan Holdsworth), a faithful to the original fusion blues take of 'Yeah Yeah Yeah' (which featured the late Ollie Halsall) and 'Foyers of Fun.'
The latter comes complete with a short Hendrix-esque intro from Clem Clempson, setting up the slightly psychedelic and fully blues’d up number.

Coming in behind Tempest with two tracks apiece are Colosseum II ('Rivers' and 'The Inquisition') and a pair of Jack Bruce solo songs, 'Weird of Hermiston' and 'Grease the Wheels' (Clem Clempson and Jon Hiseman both worked at different times with Jack Bruce).

The Colosseum II ballad 'Rivers,' which featured a strong and confident vocal from a young guitarist by the name of Gary Moore, here has acoustic guitars in place of Don Airey’s keyboard treatments.
The JCM arrangement makes for an even more delicate rendition of a lovely number, with a great vocal from Clem Clempson.
Stylistic contrast is provided by 'The Inquisition.' The full bore, firing on all four jazz-rock cylinders number (featuring Hiseman, Moore, Airey and the late John Mole) translates well to its slightly slower tempo and arrangement for power trio (whilst retaining its Spanish guitar section – espléndido).

There’s an airier feel to JCM’s cover of Jack Bruce’s melodic blues rock number 'Weird of Hermiston,' which is extended via a nice country-blues styled instrumental outro; the band however remain pretty faithful to the funkiness of 'Grease the Wheels.'

The six-minute rendition of 'Four Day Creep' allows Clem Clempson (who famously replaced Peter Frampton in Humble Pie in 1971) to really flex his blues fingered muscles; the band also manage to groove as much as they jam on the extended workout mid-song.

'Only Sixteen,' the saxophone led jazz-blues song by Graham Bond (whom Jon Hiseman had an early career association with) retains its slow blues weight.
Spacey and delicious, Mark Clarke’s bass lines and Jon Hiseman’s percussive remarks are the perfect platform for Clem Clempson to launch his six-string cries from.

The Larry Coryell penned 'The Real Great Escape' (Coryell, Jon Hiseman and the song all appear on Knirsch, the second album by German band Et Cetera featuring keyboardist Wolfgang Dauner) makes for a pleasing, blues-groovin’ closing track; nor does it hurt that it retains some of the psychedelic essence of the original.

And that would be all that need be said about an excellent album by an excellent band if not for a tragically ironic twist to the In Musical Memoriam concept behind Heroes.

JCM had only just started touring when Jon Hiseman became ill; medical investigation discovered a cancerous brain tumour. Initially there was hope for a life-saving outcome but it was not to be.

Heroes therefore is not just an album that pays homage to many great musicians we've lost; it's also Jon Hiseman's musical epitaph.
He couldn't have signed off with a better one.

Ross Muir
FabricationsHQ
​Audio track presented to promote the work of the artists. No infringement of copyright is intended. ​​