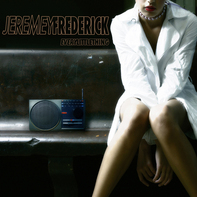 Jeremey Hunsicker is best known for being lead vocalist with Frontiers, the only nationally touring, full-time Journey tribute band in the US.

And such is the singer's talent and vocal reputation that he came incredibly close to becoming Journey’s lead vocalist in 2007.

Jeremey Hunsicker isn’t just one of the best and noted tribute singers, however.

Jeremey Hunsicker is also a songwriter and spent a large part of 2011 writing and recording his first solo album, Every Little Thing, released under the name Jeremey Frederick (his middle name and how he will be referred to for the rest of this review).

For a singer and songwriter so steeped in the American melodic rock and pop world, it’s surprising but refreshing to hear influences from outside that genre, including British artists such as The Outfield (more on whom later).

But there are two specific influences that cannot be ignored or denied...

The Journey influence is a given. Singing what is arguably the greatest catalogue of melodic rock any one band has ever produced night after night can’t help but be an influence in terms or songwriting or arrangements.

Jeremey Frederick also has a very similar tonality and timbre to Steve Perry and there is no denying the strong Perry influences in some of his vocal phrasings and inflections.
But he doesn’t mimic Steve Perry, he just happens to sound like Steve Perry. Sometimes a lot like Steve Perry.

The album’s first three tracks and its closing statement – two up-tempo melodic rock numbers and a brace of power ballads – certainly fit the melodic pop and rock profile but, as hinted at the top of this review, Every Little Thing takes an interesting path through the melodic rock landscape. With a couple of musical detours included for good measure.

‘Can’t You See He’s Gone’ announces itself in fine style with Frederick’s a cappella vocal chorus before punching into a vibrant, up-tempo tale of young love where the dream failed to live up to the reality.
If the most famous melodic rock anthem of them all, ‘Don’t Stop Believing,’ was a tale of hope via midnight trains, streetlight people and sharing nights on the basis of a smile, ‘Can’t You See He’s Gone,’ while remaining an up-beat tune, is the all-too-familiar outcome and reality of such scenarios.

The title track is an infectious, feel-good light-rock and roll number that carries melodic rock DNA in its make-up but, like the opener, has little touches that separate it from the pack. For example the little piano runs recall Bruce Hornsby’s trademark piano flourishes.
Such additional textures may not be immediately apparent, but they make their musical mark.

Also making their mark are Eric Ragno (keyboards) and Vic Rivera (guitars, drums), who feature on most of the songs.

‘Stay’ is the first of two rock ballads on Every Little Thing (the other, ‘This is Your Life,’ closes out proceedings).
‘Stay’ has a husky vocal over piano opening, but its chunky guitar chords and beefed-up vocal chorus’ separate it from the more predictable vocal-and-piano-with-beat-behind-it ballad form.

It’s also a track where the Perry influences are very much present and accounted for, in this case the vocal phrasings where some vowels are accentuated in much the same way Perry did in his later Journey’s and latter solo period.
But it works well and certainly suits the song.

The aforementioned ‘This Is Your Life,’ preceded by the instrumental intro ‘Prelude (Jeremiah 1-5),’ is unashamedly a traditional vocal and piano ballad at its heart, but it builds in instrumentation and power to become a striking closing statement.
It also features Frederick’s most emotive vocal performance but that’s not a surprise – the singer wrote the song from a personal, parental perspective.

Between ‘Stay’ and ‘This Is Your Life’ are five very different songs.
Four have their own musical character (and a couple of those detours mentioned earlier) while the fifth is a cover version.

‘Lotus’ has a light, fun and funky groove and is more pop than rock, driven by vocal, keyboards and percussion with guitars almost posted missing in action.

‘I Think I Know’ is one of the numbers that comes out of left field to give the album a musical twist. It works so well it’s become a Muirsical favourite.
Built around a jazz-blues beat and groove it has a cinematic quality running right through it, sounding like it should be the musical backdrop to a rain-soaked 4 AM scene from a 1950’s film noire movie.

If ‘What Can I Do’ sounds like the best song The Outfield never wrote, then you’re half right...
John Spinks, primary songwriter and guitarist of the British power-pop trio, co-wrote the number with Frederick and between them have created as fine a three minutes of mid-tempo melodic pop as you're likely to hear.
The trademark Outfield sound is courtesy of Spinks guesting on guitars.

‘Hoping For You’ is another highlight, courtesy of the arrangement which makes the voice – and voices – the featured instruments.
There is an ethereal quality to the song and the choral backings shape the sound with their rise and fall while the lead vocal creates the mood.
There is another Steve Perry comparison to be made however and those familiar with Perry’s ‘Missing You’ will notice a similar vocal feel and resonance.
But the more important comparison is that both songs are excellent and beautifully delivered.

Jeremey Frederick wanted Every Little Thing to be his own voice, both vocally and musically. And and as his career has primarily consisted of singing someone else’s songs you would think the last thing to appear on the album would be a cover.
But ‘Goodnight Song’ by Tears For Fears (another influence and a Frederick favourite) is well worth the inclusion and compliments the melodic sensibilities of both singer and album perfectly.

But it’s not perfect.

It genuinely sounds like, or feels like, it's missing a couple of songs – but that's because it is...
Unfortunately, necessary vocal cord surgery (and unforeseen recovery time) meant Jeremey Frederick had to release Every Little Thing in a 40 minute 10 track form, as opposed to a slightly longer 12 or 13 track album.

That makes for an unbalanced track sequencing, but the album’s pacing can be improved dramatically by rearranging a number of the tracks.
And that's easily accomplished in this Personal Playlist day and iTuned age.

But that’s my only criticisms. Other than that I love Every Little Thing about it.


The following audio track is presented to accompany the above review and promote the work of the artist. No infringement of copyright is intended.
Other tracks from Every Little Thing can be heard as part of the 'Muirsical Conversation' feature with Jeremey Frederick Hunsicker, which includes personal insight from the singer on the making of the album, his career and the story behind the Journey audition. Click here to jump to the article.