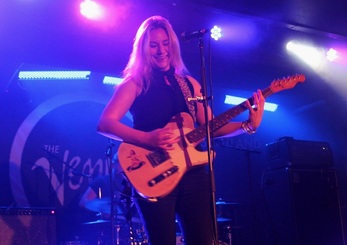 There's something deeply satisfying about catching a genuine talent in concert early on in their career in a small venue, getting that "knowing" buzz about their potential and watching them blossom and flourish over time.
This is the fourth time I’ve caught Joanne Shaw Taylor in as many years and there is no doubt that's what's happening with this young blues guitarist and vocalist.

Taylor has gradually been moving up to larger venues and bigger crowds over those years and has transformed from being a slightly serious and awkward performer to having a warm, relaxed and engaging on-stage persona; there’s a new found confidence that shines through the musician, her music and the interaction with a very appreciative Glasgow audience.

Indeed Miss Taylor is on chatty form on the night; she regales the Oran Mor crowd with a few brutally honest, darkly humorous "heart on the sleeve" tales of broken relationships and the loss of her mother to cancer.

And it seems the very warm welcome she always receives in Glasgow means this is fast becoming one of her favourite places to play despite, as the running joke throughout every gig she's played here will attest, not being able to understand a word of the local accent...
​
The current live set is based around Taylor’s most recent and most assured release The Dirty Truth, with a handful of older songs lifted from her three previous studio albums.
The show kicks off with regular show opener, the up-tempo Texas blues shuffle 'Mud Honey,' followed by another three from the latest album – 'Outlaw Angel' (which channels the best of Stevie Ray Vaughan), the funk infused 'Wrecking Ball' and the ballad 'Tried Tested and True' (introduced by JST in great style with an amusing story about an ex-boyfriend).

From that opening four in a row salvo it’s obvious JST is on fire tonight; her fingers positively flying over the fretboard during her many incendiary solos.
Then there is that voice – smoky, sultry, goose-bump inducing and oozing so much soul that it’s the perfect vocal foil for her sassy guitar playing.

Following 'Tried Tested and True' the pace is upped for an excellent version of 'Jump That Train' from the Diamonds in the Dirt album, swiftly followed by the title track from that same release.
'Diamonds in the Dirt' is probably the song furthest removed from JST’s usual blues rock style; it’s a danceable, late night laid back funk ‘n’ soul number with some superb Nile Rodgers styled guitar riffing.

A change of pace is again introduced for an acoustic rendition of two tracks from Almost Always Never, the title track and 'Army of One;' both highlight the versatility in JST’s playing.

Following the short acoustic set it’s back to full on Texas blues in the shape of 'Watch 'em Burn,' JST stretching the song with another incredible solo while shifting the song into a heavy psychedelic blues jam.

The slow burn of 'Time Has Come' from the White Sugar album follows before a tight, power trio rendition of 'Tied and Bound' makes you forget the keyboards of the original album version.

The appropriately titled 'Going Home' closes the main set but it’s literally only a couple of minutes before a loud and appreciative Weegie audience welcome JST and band back to the stage for a n encore of 'The Dirty Truth.'

From the reaction of the crowd and post-gig comment it’s clear the consensus was this was Joanne Shaw Taylor’s best Glasgow performance yet – and I don’t doubt her best tour to date.

Because the Dirty Truth of the matter is it shouldn’t be long before Joanne Shaw Taylor is up there with the Joe Bonamassa’s of the world and the next superstar of the blues rock scene.