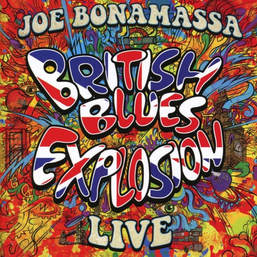 And it’s not as if Joe Bonamassa ever does the same thing twice when it comes to recording or filming live performances.
From acoustic to electric (or a mix of both), whether featuring predominately all-new material, choice covers or full-on tribute shows (Muddy Wolf at Red Rocks, the Three Kings at the Greek Theatre), each has musical merit and world-class musicianship that only the most critical detractor or envious naysayer would bemoan, ignore or refuse to accept as a quality offering.

For British Blues Explosion Live the New York native has, strange as it may sound, returned home (but then we are talking musically not geographically).

As well as being an obvious influence and inspiration Joe Bonamassa is a massive fan of the artists, bands and music that formed the British Blues Invasion that came a knocking and a rocking at the doors of the USA in the late 60s.
More specifically, Bonamassa’s love and idolisation of British blues exponents such as Eric Clapton, Jeff Beck and Jimmy Page helped shape the young six-string slinger from New Hartford, leading, decades later, to the biggest ticket in blues rock paying and playing homage to that stellar British Blues power trio.
And in exceptional style.

Recorded and filmed at Greenwich Music Time at The Old Royal Naval College in London on July 7th, 2016, British Blues Explosion Live is a red, white and blues hot tribute to the music of Clapton, Beck and Page via some of their famous and classic originals, songs from their associated bands of the time and the occasional related cover (the powerful rendering of 'I Can’t Quit You Baby,' which appeared on Led Zeppelin’s debut album, being a fully blues'd up and confidently covered case in point).

Backed by the redoubtable talents of Michael Rhodes (bass), Reese Wynans (keyboards), Anton Fig (drums) and Russ Irwin (rhythm guitar, backing vocals), Joe Bonamassa and band deliver a showcase presentation that stays faithful to what made the songs not just greats but bona fide classics yet with enough of that Bomanassa touch in vocal and sparkling guitar play to make this something far more than a well presented, official sound-a-like tribute.

From the drum tattoo intro of 'Beck's Bolero' (segueing to a snappy, crackling and band popping rendition of 'Rice Pudding') through the many musical faces of Eric Clapton (the grooving 70s blues of 'Mainline Florida,' late 80s commercial blues rock in the shape of 'Pretending,' genre-defining 60s moments with the Bluesbreakers (a scintillating blues-to-the-crying-core version of 'Double Crossing Time') and Cream (a high-energy, tight as the proverbial 'SWLABR') and on to a dynamically different but complementary selection of Led Zeppelin cuts (a honky-tonk take of 'Boogie With Stu' and a 'Tea For One' intro that seamlessly slips in to the aforementioned 'I Can’t Quit You Baby') Joe Bonamassa and band take a one hundred minute trip through British blues rock, culminating in a barnstorming version of Zeppelin’s 'How Many More Times' (preceded by Bonamassa’s blistering instrumental tour-de-force, 'Black Winter' / 'Django').

The DVD (and Blu-ray) versions (with bonus material including Joe Bonamassa and band performing a meaty and blues-gritty six-and-a-half minute version of the Fab Four’s 'Taxman' live at the Cavern Club and the guitarist being honoured with a Brick In The Cavern Club Wall of Fame) works extremely well as a filmed document of the open air event.

Using a mix of crowd spanning and crowd panning long shots, close ups and tight edits, the film helps capture the scale of the show and the vibe of the performance, set across a late evening with subdued colours that allow the predominately red white and blue (of course) stage lights to shine as brightly as the players.

Another year, another Joe Bonamassa live album.
And another worthy of your time, attention and appreciation.