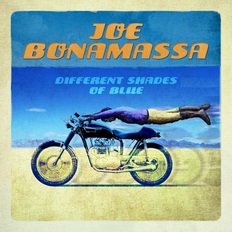 Since establishing himself as a premier blues rock live performer with a solid run of studio releases behind him Joe Bonamassa has been the model of consistency.

Live, there is no questioning the American guitarist’s six-string talents and his solo albums, including the excellent Sloe Gin and The Ballad of John Henry, have always featured a covered blues classic or five as well as a smattering of top-line, original material.

Different Shades of Blue however brings more to the table than any previous Joe Bonamassa release because it breaks that old, new and borrowed blues mould.

Other than a shortened instrumental take on the Jimi Hendrix number 'Hey Baby (New Rising Sun),' Bonamassa’s eleventh studio offering contains nothing but all-new material and each and every song stands strong. There are a number of colours, not just shades, to this album’s palette including trademark Bonamassa blues rock, a little blues funk and a few musical statements that give a nod to the guitarist’s British & Irish blues and rock guitar influences.

Prior to the album’s release Bonamassa stated that he felt he owed it to the fans after ten albums and fourteen years to deliver an album's worth of all-new tunes.
Perhaps, but quite frankly he also owed it to himself – it was high time Joe Bonamassa showcased those highly respected and in demand blues rock talents with an album of all-original material.

That statement of intent to deliver is made early, and in some style.
'Hey Baby (New Rising Sun)' heralds the arrival of 'Oh Beautiful,' one of Bonamassa's most powerful songs.
Opening with A Capella lines and a blast of full-on rock passages, 'Oh Beautiful' mixes blues and classic rock perfectly, extending to a burning solo from Bonamassa before returning to, and ending with, the opening vocal remark (proving Bonamassa has the blues in his vocal soul and not just in the strings of his vintage and modern Gibson guitar collection).

The different shades of Bonamassa’s blues then show off their colours on the ensuing numbers.
The punchy rhythm and funky rock of 'Love Ain’t a Love Song' leads to the more traditional rhythm and blues of 'Living on the Moon' before a great slice of blues comes calling in the shape of 'Heartache Follows Wherever I Go.'
But the latter is outdone by 'Never Give All Your Heart,' an atmospheric piece of slow rock blues that is both an instant Joe Bonamassa classic and the best song Paul Rodgers never sung (Bonamassa’s own vocal, with a phrasing similar to Rodgers, shines as strongly as the songs itself).

The lighter side of the blues makes an appearance on the rhythm and bar room blues number 'I Gave Up Everything For You, ‘Cept the Blues' (gaining automatic entry in to the competition for Song Title of the Year), while the atmospheric title track, made available as a free digital download prior to the album’s release, is trademark Joe Bonamassa.

The final trio of numbers return, fittingly, to the Different Shades theme.
The mid-tempo rock and blues groove of 'Get Back My Tomorrow' is in perfect contrast to the funky-blues and horns of 'Trouble Town;' the piano-led melancholic blues of 'So, What Would I Do' then follows to close out the album in fine Ray Charles or empty bourbon glass style.

Joe Bonamassa’s abilities are not in question and the album is chock-full of excellent blues-themed numbers, but Bonamassa regulars Anton Fig (drums), Carmine Rojas and Michael Rhodes (bass), along with Reese Wynans (organ, piano) Lee Thornburg (trumpet, trombone) and Ron Dziubla (saxophone) all play their part in making Different Shades of Blue such an outstanding album.

Further colour is added by the contributions of Lenny Castro (percussion), the strings of the Bovaland Orchestra and backing vocals from Doug Henthorn and Melanie Williams.

Production is again handled by Kevin Shirley, who has been on the other side of the studio glass for the last fifteen Joe Bonamassa solo, live and collaborative projects.
It’s quite the partnership and a major reason why there is such a classic rock sound attached to Bonamassa’s work over the last few years.

All-new material isn’t an all-new matter for the New Hartford guitar slinger; the rock supergroup Black Country Communion, featuring Bonamassa, Glenn Hughes, Jason Bonham and Derek Sherinian, delivered a trio of high-octane classic-meets-modern rock releases.
That said the band’s final offering, Afterglow, came across more as a Glenn Hughes solo project; nor was there ever any question who the voice of BCC was, both vocally and directionally.

But as good as BCC were Joe Bonamassa is stronger as his own (front) man, delivering both his own songs and his own interpretation of how the blues should sound – in that respect Different Shades of Blue musically defines Bonamassa better than any other previous body of work.