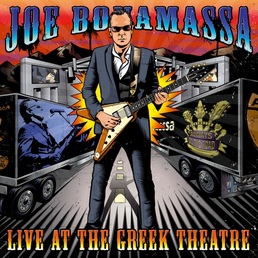 ​Joe Bonamassa must have more live DVDs to his name by now than an entire HMV aisle, leading to the obvious question of whether even the biggest Bonamassa fan needs to hear them all let alone purchase each and every one of ‘em.

It’s a fair question, and one raised by FabricationsHQ on occasion, but the counter-argument is that each Joe Bonamassa live/ DVD has had something different to offer; Team Bonamassa don’t do a conveyor belt of "songs from the latest album complemented by earlier favourites" releases.

From the prestigious and celebratory Live at the Royal Albert Hall performance and the acoustic Vienna Opera House show, and on to the Tour de Force quartet of London gigs and the excellent Muddy Wolf at Red Rocks, each presents very different shades of blues from a musician who is not yet forty but at the top of his game.

Live at the Greek Theatre is the latest addition to Joe Bonamassa’s filmed and recorded live CV and another audio and visual success for the acclaimed blues rock guitarist; but then it would struggle not to be.

First, filming at the famous Los Angeles outdoor venue was always going to be a visual winner (and another "places to play" box ticked for Bonamassa) while a covers set honouring the Three Kings of the Blues (Freddie, Albert and B.B.) isn’t exactly going to leave you short of classic and historic blues material to fill a two hours plus set with.

The 'Beginnings' intro video features a thirteen year old schoolboy called Joe Bonamassa (and a hint of six-string things to come) before switching to film of the tour trucks heading along the highway towards the famous Greek Theatre; it all sets the stage for a swingin’ take of Freddie King's 'See See Baby,' the horn section of Lee Thornburg, Paulie Cerra and Ron Dziubla supplying the brassy punch while the rest of the band provide the sassy R&B groove.

The attention grabbing opening heralds the arrival of a twenty-two song tribute to the Three Kings and a show that becomes the perfect companion piece to the similarly impressive Red Rocks performance of Joe Bonamassa’s Muddy (Waters and Howlin') Wolf show, the first of what is now established as a rolling set of performances paying homage to America’s blues heritage.

Aside from the obvious Three King staples ('Going Down,' 'I Get Evil,' 'Oh, Pretty Woman,' the mandatory 'Born Under a Bad Sign' and an exemplary 'The Thrill is Gone') there are great performances of other Kingly in stature numbers including a funky 'Breaking Up Someone’s Home' (Joe Bonamassa’s notes positively sparking off his Flying V), a Gospel and Roll rendition of 'Ole Time Religion' and an outstanding, soulful blues version of 'Hummingbird.'

But then you wouldn’t expect the performances to anything less than top drawer quality – the Three Kings shows were a tribute to three iconic blues artists delivered by a world class group of musicians.

Each and every member of the eleven piece band (including female backing singer trio Mahalia Barnes, Jade MacRae and Juanita Tippins) play their part, from the artful piano and organ stylings of Reese Wynans and the excellent second guitar work of Kirk Fletcher (who gets to throw in a few smooth licks of his own) to the locked down, water tight rhythm section of supreme sticksman Anton Fig and uber bassist Michael Rhodes. 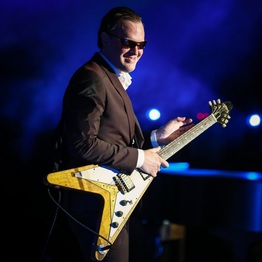 For all the quality that shines through the entire band the star of the show remains Joe Bonamassa, exemplified by the Cool Joe notes that grace the slow blues trio of 'Lonesome Whistle Blues,' 'You’ve Got to Love Her With a Feeling' and 'Nobody Loves Me But My Mother.'

When in tribute mode, whether performing the Muddy Wolf shows, the 2015 Three Kings tour or the recent British Blues Explosion concerts (featuring the music of Jimmy Page, Jeff Beck and Eric Clapton) Joe Bonamassa and band are unarguably the best covers act out there.

When it’s this good you do.

Ross Muir
FabricationsHQ   ​
​Joe Bonamassa - Live at the Greek Theatre is released on September 23rd and will be available in 2CD, 2DVD, Blu-ray, Digital Download and Vinyl formats.