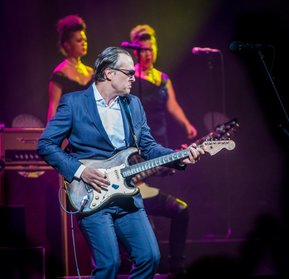 Joe Bonamassa.
Casually throw that celebrated and noted name into any group of blues rock fans and watch the fun begin; you'll see and hear reactions ranging from an almost rabid devotion to near apoplexy.

That’s because over the last few years Joe Bonamassa has become the Marmite Maestro of blues rock; an acquired taste split between those who love everything he does (attending every gig and buying every album and live DVD release) and those who say "no thanks," the latter basing their decisions on what they deem to be inflated ticket prices, or all the hype, or his sound and style, or any number of other reasons.

The early part of the set was, perhaps unsurprisingly, biased towards latest studio outing Blues of Desperation; five of the first six numbers performed were lifted from what is unquestionably one of Joe Bonamassa’s best albums to date.

On the night the title track and the atmospheric 'No Place for the Lonely' were the outstanding Blues of Desperation highlights, although when Joe Bonamassa and band are on this kind of form, every song is a breathtaking masterclass in blues playing.

Those who witnessed last year's acclaimed Salute to the British Blues Explosion tour featuring music by Jeff Beck, Eric Clapton and Jimmy Page, would have been pleased to hear the clutch of songs from that show that remain in the current set – 'Mainline Florida,' 'Boogie With Stu,' 'Little Girl,' 'How Many More Times' and 'Pretending' all got a well-deserved, second airing.

And when you throw in a couple of B.B. King covers and an Albert King classic, it was a fifty-fifty split on covers to originals, something of a Joe Bonamassa trait even when promoting a particular studio album or new release (but, as always, Bonamassa makes the chosen covers very much his own).

The best live shows are all about pacing and the weighting of the set list and Joe Bonamassa has that nailed, too, the heavier rockers interspersed with the slower, soulful and funk infused blues tunes.

As is also typical of a Joe Bonamassa gig though there is little interaction with the crowd; most of the two hours and fifteen minute set carried only the obligatory "thank you" after each song (but then at a Bonamassa gig it’s the music that does the talking) plus a mid-set introduction of the band. 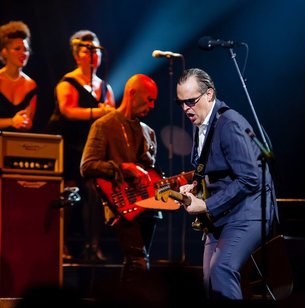 And what a band – Joe Bonamassa regulars Reese Wynans (keyboards), Anton Fig (drums) and Michael Rhodes (bass) were complemented by some superb trumpet and saxophone from Lee Thornburg and Paulie Cerra.
Jade Macrae and Mahalia Barnes were the backing vocal icing on the blues rock cake.

All in all, whether you were a Joe Bonamassa veteran or a newcomer to his live shows, it’s hard to imagine anyone who attended not going home with a huge smile on their face.

On speaking to a couple of audience members on the way out of the Usher Hall, it was obvious they felt they had just witnessed something very special. I thought so too.

Music builds bridges (we could do with a lot more of that these days) and Joe Bonamassa just built a pretty big one over the blues coloured river that divides the undecided from the already anointed.