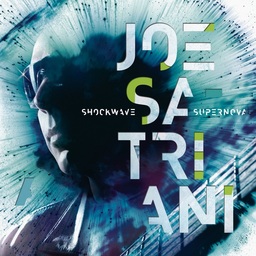 Rock guitar maestro Joe Satriani has produced a clutch of deservedly acclaimed releases and a number of Top 30 Billboard albums in his 30 year and now fifteen studio album career, but
no Satriani studio release ever truly formed a complete work or captured his musical strengths from start to finish until 2013 and Unstoppable Momentum.

Joe Satriani’s fourteenth studio album was his best work to date in terms of six-string sculptures created, its musically cohesive whole and the musician’s employed to bring Satriani’s musical visions to melodic and instrumental fusion life.

In a classic case of if the guitar strings ain’t broke don’t fix ‘em, Joe Satriani has delivered the same creative energies and myriad of styles on Shockwave Supernova (and if that’s the title of your album you’d better be damn sure you can produce the goods); he has also smartly retained the talented services of keyboard and guitar player Mike Keneally, Satch’s right-hand man in the studio and on the stage over the last few albums and tours.

The album is further sonically enhanced by the return of Joe Satriani’s long-time producing partner and sound engineer John Cuniberti, whose work with Satriani goes back to the guitarist’s earliest releases including 1986 debut album Not of This Earth and the critically acclaimed Surfing with the Alien.

Additionally, the featured rhythm section on Shockwave Supernova, drummer Marco Minnemann and bassist Bryan Beller, are as good a partnership as you could wish for in the land of progressively based instrumental rock.
The pair are part of noted power-fusion trio The Aristocrats (along with another outstanding six-string talent, Guthrie Govan) and form part of Satriani’s current live band with Mike Keneally.

The dynamic rhythmic duo feature on the title track which opens the album with a punchy, staccato styled riff before the tune kicks in to high gear.
Bryan Beller’s bass both anchors and drives the bright and ballsy number while Mike Keneally adds keyboard textures behind Satriani’s trademark soaring six-string remarks.

The melodically charged 'Lost in a Memory' follows before a brace of numbers featuring noted drummer Vinnie Colaiuta (who has played with everyone from Frank Zappa to Paul Simon) and Jane’s Addiction bassist Chris Chaney are unveiled – the funky little 'Crazy Joey' and the even funkier, blues ‘n’ swing tinged 'In My Pocket.'
Both tracks would have been at home on Unstoppable Momentum and as Colaiuta and Chaney were the rhythm section on that album it’s likely the tracks – along with 'Movin’ On' (quirky piano meets tasty slices of Satch charged guitar) and the rockin’ 'Scarborough Stomp' – are from those sessions or post Momentum / pre Shockwave recordings.

The Satriani-Keneally-Beller-Minnemann four-piece are back in full cry for the pulsating and six-string muscle flexing 'On Peregrine Wings,' a track made available as the pre-album release teaser and a melodic fusion delight.

Chiming guitars over a brooding, mid-tempo rhythm give 'Cataclysmic' a dark rock tone and metal-lite underbelly before a complete change of pace comes by way of the delightful 'San Francisco Blue.'
The simple, cool breeze shuffle is a highlight of the many faceted album – but then any track that has San Francisco in the title is always going to be on a winner for this Bay Area aficionado.

The quartet slow the pace for the bluesy groove of 'All of My Life,' a number that features some striking melodic tones from Satriani, while a touch of funk returns to proceedings for the 70s rock styled fusion of
'A Phase I’m Going Through' (with an introductory and recurring riff that makes it a second cousin, instrumentally twice removed, of The Who classic 'I’m Free').

The touching musical vignette 'Butterfly and Zebra' acts as a short and sweet interlude before a final trio of tracks bring the Sonic Supernova show to a close.
The pacey 'If There is No Heaven' precedes the more reflective 'Stars Race Across the Sky' (Satriani’s guitar lines expressing themselves over a repeating piano motif and Marco Minnemann and Bryan Beller’s rhythmic framework) before Beller’s resonating bass line underpins the slow, semi-symphonic and suitably titled 'Goodbye Supernova.'

Shockwave Supernova is a 15 track album that matches the musicianship and textured instrumental quality of Joe Satriani’s previous studio release.

On repeated plays however, as the subtleties of the high-energy, up-temp numbers and the more intricate pieces introduce themselves, the Shockwave of this particular Supernova expands to go beyond the Unstoppable Momentum of Satriani’s previous album.

It also reinforces just why the innovative and creative rock instrumentalist Joseph Satriani is the world’s most commercially successful solo guitar performer – a title that won’t be relinquished any time soon.

Ross Muir
FabricationsHQ
Joe Satriani will support the release of Shockwave Supernova with a World Tour beginning in Europe in September; the nine date UK leg (with special guest Dan Patlansky) kicks off on November the 1st.
US dates are planned for early 2016.