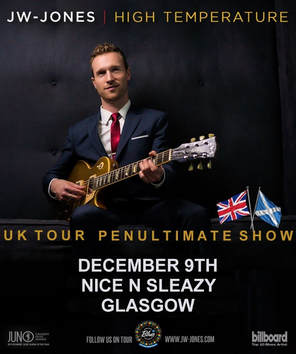 The irony behind the return to the UK of award winning Canadian bluesman JW-Jones with ninth studio album High Temperature (like previous release, Belmont Boulevard, a Top 10 Billboard Blues chart success) is the tour was routed through some low temperature travelling, courtesy of a chilly November and December.

But the British winter climate is mild compared to what the hardy Canucks are used to – and it's not as if cold days of lengthy travelling was ever going to stop Jones and his tight and musically flexible rhythm section of bass player Laura Greenberg and drummer Will Laurin heating up and rocking out the venues they played, including Nice N Sleazy in Glasgow.

Opening with Lonnie Mack’s pacey, rockabilly-blues instrumental 'Wham' (which features as the closing track on High Temperature) the JW-Jones Band proceeded to play another five new numbers within the next eight songs.
That was a brave set-list decision given High Temperature has still to make the sort of mark here that it has in Canada and the US blues charts, but it was a decision that paid well received dividends.

The honky-tonk shuffle of High Temperature's title track was next to feature, before it gave way to the grittier 'Price You Pay;' there then followed the first blues cover/ standard of the set, 'Early in the Morning,' the big band arrangement of the Buddy Guy number working extremely well in swaying and grooving trio mode.

High Temperature music returned in the shape of 'How Many Hearts' (written by country singer-songwriter Jaida Dreyer, whose duet vocal with Jones on the album was ably covered by Laura Greenberg) and the swaggering groove of 'Murder in My Heart For the Judge.'

Next up was a trip back to Belmont Boulevard by way of the smooth 12 bar 'Blue Jean Jacket' and JW-Jones' rocking cover of 'Watch Your Step,' Laura Greenberg and Will Laurin in rhythmic overdrive on the Bobby Parker number.

The new and the old mixed and matched in fine style across the second half the set, which included High Temperature’s radio friendly 'Same Mistakes' keeping classic company with the much covered Jimmy Rodgers song, 'Who’s Loving You Tonight' (featuring some drumstick slide guitar from JW-Jones).

Another Buddy Guy (and Belmont Boulevard) number, the funkier blues of 'Tell Me What’s Inside of You,' showcased just why Laura Greenberg is a Maple Award nominee and proved unequivocally that JW-Jones has the licks and not just the tricks.

Those tricks manifested themselves in fierce and fun style in the concluding part of the set.
First, the frantic finger picking and snare-rim tapping pace of Belmont Boulevard instrumental 'West Side Magic Boogie' was extended via a blast of Bo Diddley and the classic riff and intro of 'Voodoo Chile.'

Better yet was 'French Toast,' an instrumental that featured a short and sharp drum solo, some seriously grooving bass lines and a section of 'Third Stone From the Sun' (a slower interpretation with syrupy thick, bluesy notes emanating from JW-Jones' gold top Les Paul), all of which led to an on-the-fly switch of instruments, JW-Jones taking the drum seat while Laura Greenberg hit some funky guitar tones over Will Laurin's bass lines.

As the players took back control of their own instruments the trio embarked on a surfin' blues and rockabilly romp through classic TV themes and famous rock and pop riffs; the results were James Bond sharing the stage with Batman and Hawaii Five-O while the Stones found some satisfaction alongside The Shadows. (While there was no "Shadows Walk" there was some seriously impressive and synchronised behind the head guitar and bass playing from Jones and Greenberg).

It was quite the end to quite a show, only to be followed by a shufflingly great encore of the Fabulous Thunderbirds 'Rock With Me,' which the Nice N Sleazy audience (who made such an appreciative volume of noise throughout you’d swear the crowd was four times the size it was) duly did.

Glasgow was the penultimate show of the JW-Jones 2017 UK tour, a seventeen date, one day off, all clubs and distances covered road trip (Example? Four dates south of the border and more than one thousand travel miles sat between the Edinburgh and Glasgow shows).
But it was also relatively low-key – JW-Jones still has a low profile here, so he was never going to move every available ticket, but he did have some very busy nights (fittingly he finished the tour next evening at the Cluny 2 in Newcastle, where he closed out his first tour of the UK in 2016 to a sold-out show).

That routing, travel and gig schedule is a lot of effort for what might seem a small return, but that same effort is seen and heard in a different form each and every time the JW-Jones Band hit the stage, whether packing them in back home in Canada, rocking the blues in and around Nashville, or playing low-key club gigs in the UK.

Nor will you find a more entertaining or sharp dressed performer (shirt, tie and trousers, sorry, pants, are the snappy order of the day for the Jones boy) either side of the pond.

If you missed JW-Jones last time or on this particular tour, do not miss him when he comes calling again.
High Temperature by album name, High Temperature (and high quality) by performance nature.