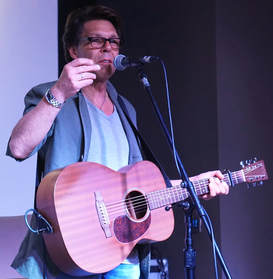 I first met Kasim Sulton, long-standing Todd Rundgren bassist and part of Rundgren’s four-piece Utopia from 1976 to 1986 (and later reunions) when Utopia played a residency at the sadly short-lived London music club The Venue in 1978.

Back then Kasim Sulton had just turned 23 but looked 17, an age belied physicality he has kept through his entire career.
At 35 he looked 25, at 45 he looked 35… you get the good looking picture.
Even now he looks ten years younger than he is and about five years younger than me, although the reverse is age-true.

Joking aside, it was a pleasure to re-engage with Kasim Sulton when he performed a one-man show in Glasgow having played his musical and personable part the previous four days at Todd Rundgren’s ToddScot at Kelburn Castle in North Ayrshire (one of four world-wide ToddStock events organised this year to celebrate Rundgren’s 70th birthday; while the man himself had since left for home, guitarist Jesse Gress and drummer Prairie Prince were in attendance at Glasgow).

It was also great to see a full house for the music bar styled event (kudos to Jill Mingo, a 'well kent' face at the Hard Rock Café and die-hard Rundgrenite & Utopian, for her efforts in setting the gig up) with the audience in equally full voice (many of whom had attended ToddScot, including some of Kasim Sulton’s biggest fans and friends from across the water).

Since Kasim Sulton's earliest Utopian days and as cited by a few music critics upon review of his debut solo album back in 1982, there have been "mix-between" comparisons to the (earlier) voices and intelligent pop-craft of Billy Joel and Paul McCartney.
There’s certainly a similarity to those two music giants in Kasim Sulton’s ability to deliver many an ear catching, melodically structured number that goes well beyond your derivative three or four minute pop or
pop-rock song.

Set opener 'God Of Low' (one of four numbers to feature from ​3, Kasim Sulton’s most recent studio album), is a punchy, intelligently lyricised case in point; the not-going-to-bring-me-down-any-more styled lyric gives extra purpose to the song’s big chord positivity and uplifting melody.
​
Similarly, the lyrically searching and melodically smooth charm of 'Watching The Wold Going By' that, given the current state of facepalm political affairs both sides of the pond, has unintentionally developed a secondary but extremely fitting meaning ("These are the days I can’t decide if I should laugh or cry" sings Sulton. You and me both mate).

But Kasim Sulton’s Utopian heritage means there are always Utopia tunes to be heard and sung-a-long to, such as on the slower, singer-songwriter version of 'I Just Want To Touch You' (other than the tell-tale "ooh-ooh!" interjections, Sulton’s version of the song carries no hint of its Beatles pastiche origins). 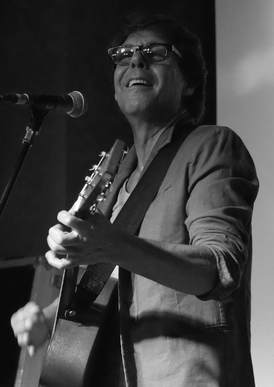 ​Kasim Sulton was also in fine form vocally; he still carries much of the richness and depth of his thirty and forty years ago voice and has the necessary vocal smarts – hitting highs earlier than normal on 'Libertine' (from Utopia’s outstanding, self-titled power-pop album of 1982 ) to clear a frog in his throat and getting creative with where and when to drop under notes on Todd Rundgren’s beautiful, acoustic based number 'Cliché'
(helping to vocally accentuate just how good a singer Rundgren is and what a deceptively rangy voice he had and, for the most part, still has).

Dropping the guitar for piano duties ("I have to, I’ve battered the crap out of the guitar!" – it certainly needed a bit of re-tuning when he returned to it later) allowed for a stripped back (but faithful to the original's melodious vibe) version of Utopia’s 'Maybe I Could Change,' while the Adventures In Utopia brace of 'Love Alone' and Top 40 hit 'Set Me Free' were, unsurprisingly, vociferously embraced by a room full of Utopians.

As well received as the latter pair of songs were, the piano song of the night was one of the stand-out songs from 3, 'The Clocks All Stopped.'
Featuring Todd Rundgren and ex Utopian keyboardist Roger Powell on the album version, the song was intentionally written and arranged to sound like Utopia if the band were recording today.
"I think I came pretty close" commented Kasim Sulton. Actually, from chord progression and harmonies to tonal structure and rhythmic pulse, you pretty much nailed it Kaz me old mucker.

Elsewhere there was the fun, looser moment of acknowledging his six years with Blue Oyster Cult with a short rendition of 'Godzilla' (cheekily and misleadingly introduced as "the band’s heartfelt ballad") and mandatory set closer, the Utopia Family Anthem 'One World,' featuring Jesse Gress on guitar and the entire audience on their feet delivering loud, proud, en masse lead vocals.

From Kelburn Castle to San Francisco, from New York to old Glasgow… ladies, gentlemen and fellow Utopians, the Sulton of sing-a-long.

​
Those unfamiliar with Kasim Sulton's solo work or who have not picked up on his more recent solo adventures can find the perfect starting or pick-up point with Sulton's first ever live album, Live Bootleg, released last year (click here for the review page).