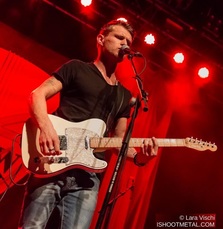 There’s worse ways to spend a birthday evening than take in the sights and sounds of a stand-out blues gig featuring the Kenny Wayne Shepherd Band on their whistle stop, five date UK tour before they head to Europe for the rest of April.

While renowned guitar slinger Kenny Wayne Shepherd already has quite the pedigree (six #1 Billboard Blues Chart albums and four platinum selling releases, the latter being serious kudos for a  blues-based musician) British six-stringer Ben Poole is one of the relatively new kids on the blues block – but one who is already quite the talent.

Opening with a robust version of the title track from his Let’s Go Upstairs studio release of 2012 and closing with a muscular and seriously funked-up rendition of 'Starting All Over' (the bonus studio track from the excellent Live at the Royal Albert Hall album) Ben Poole and band – Craig Bacon (drums), Mat Beable (bass) and Stevie Watts (keyboards) – delivered a superbly performed and well received forty five minute set of blues soul, shuffle and power ballad blues.

The set also showcased a number of tracks that will feature on the next Ben Poole studio album, which should be recorded this summer and available by the end of the year.

While each track made its mark the Gary Moore inspired 'Time Might Never Come' (dedicated on the night to the late and great Irish guitarist) featured both deft, melodic lines and searing fretboard work from Ben Poole.
New number that it may be 'Time Might Never Come' has already established itself as a performance tour de force. 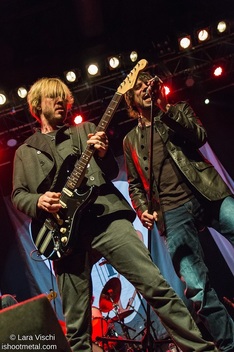 The Kenny Wayne Shepherd Band’s own live tour de force, an incredibly powerful and pulsating ten-minute cover of the Jimi Hendrix classic 'Voodoo Child' closed out what was probably the highest tempo and highest-energy blues rock shows the O2 ABC in Glasgow has witnessed.

Bu then a musical statement of things to come had been declared loudly, tightly and clearly some ninety minutes earlier when the KWS Band opened with the one-two rock ‘n’ roll blues punch of 'Never Lookin' Back' and their cranked up cover of Bob Dylan’s 'Everything Is Broken.'
The quintet went on to deliver a full-on set that was peppered with a number of blues standards and some bring-it-down light and shade moments.

While Kenny Wayne Shepherd’s six-string talents are an obvious feature of any KWS Band show, this group is one that fires on five finely tuned cylinders....

Long-time front man Noah Hunt is far more than just the singer of the KWS Band.
Hunt first sang with Kenny Wayne Shepherd on the guitarist’s second album Trouble is… in 1997 and has become the perfect vocal foil to Shepherd's blues licks and musicality.

Noah Hunt’s bluesy tenor was a strong feature of every song but the singer came in to his own on the slower or space-to-breath material where his voice, with a tonality not dissimilar top Paul Rodgers, added true vocal weight to numbers such as the excellent slow blues 'Heat of the Sun.'

Keyboard player Riley Osbourne has performed or guested on more than a hundred albums by dozens of blues and country blues artists (including Willie Nelson); Osbourne adds not just colour to the band’s live sound but some great honky-tonk piano chops on Stevie Ray Vaughan’s 'The House is Rockin’ (one of a few cover numbers where Kenny Wayne Shepherd took lead vocal).

And you can’t argue with a rhythm section that comprises drummer Chris Layton (a 2014 inductee into the Musicians Hall of Fame as a member of Stevie Ray Vaughan and Double Trouble) and Scott Nelson, who anchored every tune with what must be the beefiest bottom end in the blues business.

Layton and Nelson underpinned a superb version of B.B. King’s 'You Done Lost Your Good Thing Now,' which featured a great Noah Hunt vocal, blues-soaked bars of piano from Riley Osbourne and some outstanding soloing from Kenny Wayne Shepherd, his guitar melodically crying and issuing note-bending wails in equal measure.

As this reviewer and music critic has found himself writing a lot over the last couple of years, blues and blues rock currently finds itself in rude health.

The O2 ABC had first-hand proof of that on a cool April night in Glasgow via a genuine talent and emerging force from Brighton and an established, still delivering the goods guitarist out of Shreveport Louisiana.

No, as birthday evenings go, it certainly wasn’t a bad one – happy birthday blues to me.