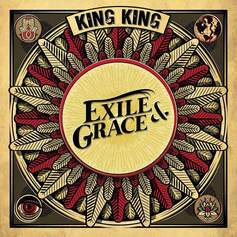 Given the reception and acclaim for King King’s previous studio album Reaching For the Light the follow-up was always going to suffer, pre-release, from "hard act to follow" or "where do they go from here" syndrome.

But as assuredly as singer, guitarist and front man Alan Nimmo is going to be kilted and booted when he walks on to a stage, so too have the band – Nimmo, Lindsay Coulson (bass), Wayne Proctor (drums, backing vocals) and Bob Fridzema (keyboards, backing vocals, and making his last appearance with King King before departing for pastures and projects new) – delivered an assured, if less bluesified, follow-up.

Having toured with Thunder on the rock heavyweight’s UK arena shows in 2016, and with Alan Nimmo’s documented love and appreciation for bands such as Thunder, Bad Company and original era Whitesnake, Exile & Grace was perhaps the next logical, classic rock paved step – King King haven’t so much delivered a follow-up to Reaching For the Light as produced a an album that both complements, and is a natural progression from, what has gone before.

Lead-off single and first track '(She Don’t) Gimme No Lovin' is a bright and brash lightning strike of a number that also brings the sound of Thunder (vocalist Danny Bowes would love to get his tonsils around this one).
As an opening statement it’s a declaration of blues veined and full blooded classic rocking intent.

Second number 'Heed the Warning,' with its 'Highway Star' styled rolling intro, shifts in to a lower gear to become a mid-tempo melodic rocker that swaggers as much as it grooves; the big opening of 'Broken' follows, before dropping to a simpler tempo (but with a big chorus) that allows Alan Nimmo, over some great Hammond organ, to sing the blues for the state of the world and concern for the future.

As strong a number as 'Broken' is it has to bow in reverence to the sentimental weight and power of 'Find Your Way Home.'
On only one play the blues rock ballad hurls itself up the King King’s Greatest Moments chart to rival the likes of 'Long History Of Love;' by the second or third play-through you’re almost obliged to be singing your heart out alongside Alan Nimmo’s genuinely emotive vocal delivery "when the sun goes down on your memories, please find your way home."

'Tear it All Up' returns to the mid-tempo and rockin’ swagger that King King seem to be able to do deliver with ease (rock solid beat from Wayne Proctor, great low-end punch from Lyndsay Coulson, feisty little solo from Alan Nimmo, tasty little Hammond stabs from Bob Fridzema); it’s also a number that positively screams to be let out of the studio so it can tear it all up on the bigger stage.

'Betrayed Me,' which follows, is a pulsating, slower blues rock number that sits somewhere between late 80s era Bad Company and early Whitesnake, while closing number 'I Don’t Wanna Lie' is an up-tempo and funky soul-blues shuffle with sing-a-long rock 'n' hook chorus (be ready to belt this one out in the car or shower).

Beyond the songs, the sound of the album should be credited too.
The full-bodied production from Wayne Proctor and Alan Nimmo was handed to Chris Sheldon (Foo Fighters, Biffy Clyro, Therapy? to name but three) for final mixing; Sheldon's rock credentials have given Exile & Grace that "classic rock band" sound, most noticeably with how high Bob Fridzema is placed in the mix.

Related, and more importantly, Bob Fridzema hasn’t just added a blanket of Hammond and smattering of keys to Exile & Grace; he’s given each song the texture it needs, whether that be the rockin' piano on the rollin' 'Long Time Running' or the Hammond swirls that give extra weight to the big Wayne Proctor beats and southern-tinged rock of 'Nobody Knows Your Name.'

While it’s hard to find fault with the songs or the sonic appeal of Exile & Grace there is a question mark over its nine track, 39 minute length – that’s not so much short and sweet as short and bittersweet, especially knowing that King King’s cover of the Whitesnake song 'Give Me All Your Love' is exiled from the CD release but graces the vinyl edition.

For the (vinyl) record, King King's take on the number from Coverdale & Co's metal skinned 1987 'Snake variant is a slower tempo, original era styled interpretation, making it a great fit for King King and the Classic vibe and Rock feel of Exile & Grace. Hence why it’s a serious omission.

But, quite frankly, it’s also about the only fault to find on a classic rock styled album from a band who have kept their blues soul intact.