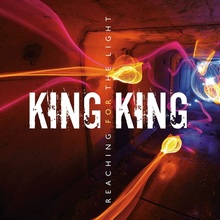 A short, rapid fire drum intro, a bluesy guitar riff quickly twinned with the accompanying bass line and throaty organ backing loudly and clearly declare that King King are back and firing on all four cylinders, Alan Nimmo declaring "you hit me hard like a hurricane!" in a big ‘n’ beefy three-minute slice of high-tempo, melodic blues rockin’ energy.

Singer and guitarist Alan Nimmo’s comments that Reaching For the Light is "faster, louder… more exciting" than what has come before is accurate in terms of the energy that radiates off the album and its nine tracks but the King King front man’s words only tell you half the story.

On Reaching For the Light multiple blues award winners King King have stretched further than before, naturally progressing and extending from their feisty debut release Take My Hand and the slightly mellower but stronger follow-up Standing in the Shadows.

While the hard hitting blues rock of album opener 'Hurricane' and the heavyweight punch of 'Crazy' (which carries a distinct 70s rock grit and appeal) are in line with the "louder" and "exciting" comments, Reaching For the Light has added more shades of blues to the band’s musical palette.

Songs that successfully and confidently cross musical boundaries include the rhythmic soul-blues groove of 'Waking Up,' the edgier funkified feel given to Paul Carracks’s pop-swing number 'Just a Little Lie' and the AOR blues of 'You Stopped the Rain,' the latter's lyrics written a few years ago by Alan Nimmo when his brother Stevie (the other half of the painfully under-appreciated Nimmo Brothers) had throat cancer.

All three numbers have bags of melodically infused commercial appeal and in a cookie-cutter free musical world would be staples of mainstream radio playlists.

'Rush Hour,' the lyrics for which were written by Alan Nimmo when he was 16, has been worked up, finished off and presented as a fabulous piece of old school, soulful heavy blues rock, topped off by a passionate and perfectly phrased vocal from Nimmo.
If the late and great Scottish vocalist Jimmy Dewar had given Paul Rodgers a day off and guested with Free or Bad Company back in the day (all major influences on a teenage Alan Nimmo) it would have sounded much like this. But it wouldn’t have sounded much better than this, either.

'Lay With Me' may not carry the same message or melody as the Curtis Mayfield penned 'People Get Ready' (one of the greatest ever pop standards) but it carries the same Gospel tinged vibe and charm as it builds from its piano led arrangement. The song features another great vocal from Alan Nimmo and some wonderful, vibrato filled organ remarks from Bob Fridzema.

In terms of overall sound and musical chemistry, it’s hard to overstate just how much Fridzema (who replaced Bennett Holland shortly after the release of Standing in the Shadows) brings to King King – and when you have the guitar talents of Alan Nimmo backed by one of the best rhythm sections in the blues business courtesy of Lindsay Coulson and noted groove drummer Wayne Proctor, it’s not hard to see or hear why this is the best British blues rock band currently performing and recording.

Closing out Reaching For the Light are the atmospheric, power-ballad blues 'Take a Look' and album tour de force 'Stranger to Love.'
A pulsating and powerful piece of slow blues rock, 'Stranger to Love' flexes very strong muscles in the live set and on Reaching For the Light makes for an excellent closing number – Lindsay Coulson and Wayne Proctor's sultry rhythm underpinning the rise and fall of a song that features big chorus vocals and a softer spray of melodic guitar notes over the brooding middle section.

In terms of a musical statement, 'Stranger to Love' is nothing less than 21st century blues rock's 'Mistreated;' quite apt considering British blues and British blues rock is currently enjoying a Purple Patch.

A major part of that resurgence is down to the next generation of blues rock guitar-slingers such as Joanne Shaw Taylor, Ben Poole and Laurence Jones, to name but three.

All three are undeniable talents with some outstanding albums already under their blues belts, and each is more than capable of putting themselves in line for the King King crown.

But, much like wee Lizzie over at Buck Towers, the band aren’t showing any signs of abdicating just yet, or resting on their award winning laurels.
In fact quite the opposite.

Because Reaching For the Light is the best blues rock album you’ll hear this year – and one of the best of the modern blues rock era.


The following audio track is presented to accompany the above review and promote the work of the artist.
No infringement of copyright is intended.
Click here for FabricationsHQ’s Feature Interview Article with Alan Nimmo.