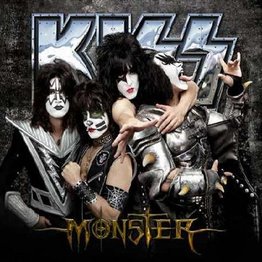 In 2009 KISS did what a number of classic rock acts had just done, were about to do or continue to do – re-invent themselves for the resurgence in hard and melodic rock by recording an album that emulates the sound and style of the band from their classic or most successful era.

In the case of KISS that album was Sonic Boom and, while it was a predictable success for the band and unarguably had the sound, it didn’t have the songs.

’Modern Day Delilah’ was an instant Kiss Klassic and ‘Say Yeah’ was geared to be a strong live number, but as an album Sonic Boom was never going to send Love Gun or Destroyer to the back of the queue.

Monster however is a different story, but based on a similar plot-line…

Founder members and purveyors of the KISS brand, Paul Stanley and Gene Simmons, wanted a musical successor to Sonic Boom but with even more attention to classic song and classic sound detail.
In production terms? Take a holiday Mr Digital and come right in, Mr Analog.

Prior to the album’s release Gene Simmons confirmed the recording was very much old school:
"The recording process was 24-track tape and an old Trident board. And as many tubes as possible.
You need tubes, electricity and thick wood to make that thick sound."

Add y to analog and you have the analogy just described by Simmons; but that "thick sound" is more than a descriptive term for the Monster production done by Paul Stanley and Greg Collins (who were also the producers of Sonic Boom).
It’s also a hard and heavy musical fact, confirmed by the opener and lead off single ‘Hell or Hallelujah,’ which comes rollicking and rolling out the speakers.

Reminiscent of ‘Detroit Rock City’ in its vibrancy and rattling pace, ‘Hell or Hallelujah’ proves loudly and clearly that twin guitars, drums, bass and vocals is all you truly need to be a heavy but harmonic rock and roll band. And that thick sound.

Paul Stanley may not have the vocal range he once commanded but his reaching yet never screeching deliveries fit the rock and roll profile of ‘Hell and Hallelujah’ perfectly.

Gene Simmons steps up to the microphone for ‘Wall of Sound’ and the heavy vibe of the mid-tempo number produces just that.

The in your face energy of ‘Wall of Sound’ continues through songs such as ‘Freak’ and ‘Shout Mercy,’ while riff 'n' roll fun is supplied by ‘Eat Your Heart Out’ and ‘Outta This World.’
The latter features lead guitarist Tommy Thayer on vocals, lyrically playing on his Spaceman persona inherited from original KISS guitarist Ace Frehly.
Thayer however is very much his own (space)man and throws some great rock and roll guitar around the album.

Drummer Eric Singer takes lead vocal on the typically KISS kitsch ‘All For the Love of Rock & Roll’ and it wouldn’t be a KISS album without a so crass it’s funny, innuendo laden raunch and roll number.
‘Take Me Down Below’ is guilty as charged.

The band go back in time for the tongue-in-cheek, heavy caveman rock of ‘Back to the Stone Age,’ with Simmons declaring he’s "back where I belong!" (I couldn’t possibly comment) over a pounding Eric Singer beat and incessant riff.

The staccato rhythm of the Stone Age verses recall the Kiss classic ‘Deuce,’ but this is not an album rewriting past glories – Monster may take its lead from the past but it’s a big and beefy rock and roll album for the 21st century.

Collectively, the twelve tracks (thirteen on the iTunes bonus track version) confirm what the band said Monster would be – heavier than Sonic Boom and a record that reflects their rock and roll origins.

It’s also a clear declaration that KISS is still one of America’s greatest guitar-led rock and roll bands.
And, based on recent musical events, arguably the greatest…

Just prior to the release of Aerosmith’s highly anticipated Music From Another Dimension! front man Steven Tyler made a few all make-up and no substance remarks about KISS during an interview with a Florida radio station.

"They've got a couple of hits, but they’re more comic-book – you see them in their spackled faces" said the ex-American Idol judge.
"A Kiss lick and a Joe Perry lick – two different worlds. And that's why I think Aerosmith has been around forever, we really do take ourselves seriously."

You might want to take a look in the mirror, Steven, and as regards longevity Aerosmith’s debut album was released in 1973, only a year before the first KISS album.

Joe Perry was also interviewed, with the Aero guitarist adding "It’s two different animals. They went the theatrical way and used rock ‘n’ roll as their soundtrack. For Aerosmith, the music is our show."

And therein lies the rock and roll irony.

The new Aerosmith album was hyped to the absolute max (including an intentional delay) but, outside of the Aero hard-core, it met with very mixed reviews and failed to match all that hype.
It also turned out to be Music From the Usual Aerosmith Dimensions, but this particular Aero release fell between two stools and went for quantity over quality (control).

A rock and roll Monster it isn’t.

The 20th studio album from KISS however, very much is.


The following audio track is presented to accompany the above review and promote the work of the artist.
o infringement of copyright is intended.