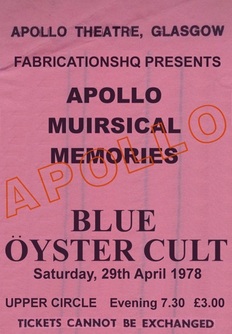 "We’ve come over to the UK all the way from New York City just to ask you this question… are you ready to rock!"
On the basis of the roar and response to Eric Bloom’s question the answer was an unequivocal "Yes!"

The positive reply was part of a raucous welcome for Blue Öyster Cult’s first (and as it would turn out only) visit to the Glasgow Apollo; the sold-out show was part of a UK tour that was a major success.

In 1978 Blue Öyster Cult were showcasing not just a great collection of songs but a great light show, courtesy of full lighting rig and the incorporation of stage lasers.

Fairly commonplace in arena shows now, Blue Öyster Cult were one of the first bands to utilise lasers as part of a rock concert but in the 70s it was a very expensive toy and technically still in its infancy.
Overall costs and glitches would make it a relatively short three-year feature of BÖC shows.

The three year love affair with lasers aside, the band were peaking both commercially and as a unit.
There would be further successes in the 80s with albums such as Fire of Unknown Origin and the hit single 'Burnin’ For You' but for many the late 70s era of the band was as good as it got.

The band were firing on all five cylinders of the original line-up and blending the somewhat progressive and sometimes eclectic material of their first three albums with 1976’s '(Don’t Fear) the Reaper' and the Top 30 Billboard album Agents of Fortune.
The following year there was a monster by the name of 'Godzilla' and the commercial appeal of an album called Spectres.

But prior to the album's release it was uncharted live territory for British BÖC fans unfamiliar with a Blue Öyster Cult live show – most of the audience would have been caught unaware by the rocked out extended bridge of opener 'R. U. Ready 2 Rock' and Eric Bloom’s question to the crowd, all accompanied by a blaze of white light across the audience.

The rocking instrumental section and light show added power to the band’s already strong opening gambit but it was followed, and bettered by, an outstanding version of 'E.T.I.' that sported a blistering instrumental finale.
Lead guitarist Donald 'Buck Dharma' Roeser’s chunky power chords drove the song along while Eric Bloom’s mysterious extra-terrestrial lyric shaped the chorus – Bloom’s bracelet laser sent a light cone out above the Apollo audience while vocally declaring Balthazar had "found the saucer’s new-ooooos!"

The one-two opening punch was followed by a further seventy-five minutes of BÖC classics and three covers.
Two of those covers were, at the time, set list surprises – a punky and feisty rendition of MC5’s 'Kick Out the Jams' shared the stage with a faithful but rocked up version of The Animals classic 'We Gotta Get Out of This Place.'

But it was the BÖC originals that stole the show.
The progressive rock and roll of 'Harvester of Eyes' was a crowd favourite with a three thousand strong "Weegie" choir in fine voice... 'ME 262' was as jet powered as the fighter plane it took its name from... the short and sharp 'This Ain't the Summer of Love' was another sing-a-long opportunity for the Cult fans of Apollo.

Just about every song played on the night could be cited as a highlight but the plaintive and powerful 'Then Came the Last Days of May' was a true stand-out.
Featuring Buck Dharma on vocals, the guitarist sprayed some brilliant guitar notes out across the theatre while surrounded by a circulating array of lights and lasers.

Eric Bloom and Buck Dharma may have been the featured BÖC front men (and still are) but the late Allen Lanier’s keyboards were an integral component on many of the songs (including some great rock and roll piano on the aforementioned 'ME 262') while his rhythm guitar work beefed up the sound of others.

The Bouchard brothers were as tight a rhythm section as you would find in 70s rock and both got their moments in the spotlight.
Albert Bouchard put his voice and big beats across 'Cities on Flame with Rock and Roll' and raised his 'Godzilla' masked head to powerful, stroboscopic effect during the drum solo of the Spectres classic.
Joe Bouchard’s rhythmic jam with his brother produced some punchy and funky four-string lines before seguing to 'Five Guitars,' the band’s unique instrumental workout where each musician featured on rhythm, harmony or lead guitar.

The band’s main set closer was a bombastic version of Steppenwolf’s 'Born to Be Wild' while a searing 'Hot Rails to Hell,' featuring Joe Bouchard on lead vocal, was the encore opener.
Inevitably '(Don’t Fear) the Reaper,' which takes on an added vibrancy live, brought the curtain down on an exceptional rock show.

There were certainly Some Enchanted Evenings when Blue Öyster Cut came out to play, and on the night of 29th April 1978 Eric Bloom, Buck Dharma, Alan Lanier, Albert and Joe Bouchard were near flawless.

It was one of the best rock concerts the famous theatre ever hosted and it remains one of my all-time favourite gigs.


'Laser Love' is part of a series of retrospective reviews by Ross Muir, reflecting upon and recalling some of the best-ever rock shows at one of the best-ever venues.
The review was inspired by hearing the show again via Rescued Recordings, a non-profit making undertaking by fans dedicated to archiving as many Glasgow Apollo/ Green’s Playhouse rock and pop concerts as possible through the collation of official live releases, radio broadcasts, soundboard and audience recordings.

Between 1973 and 1985 (and from the late 60s as Green’s Playhouse, when the cinema and ballroom complex became a live music theatre) the Glasgow Apollo was the venue for rock and pop gigs in the UK.