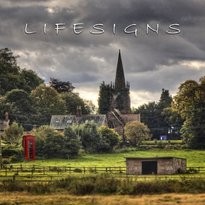 Usually takes its lead from classic 70s progressive rock; musically influenced by early-era Genesis and a smattering of YES in vocal arrangements and harmonies.

Some bands successfully create their own sound within the above template; others think a little outside the box and expand or even challenge the genre.
But many sink into the murky progressive waters, weighed down by a prog-by-numbers predictability and ponderous passages only their prog-mother could love.

But the album is far more than “quintessentially English, modern prog” because Lifesigns carries elements of melodic rock and pop, has hooks a plenty and contains complex but not overly-complicated musical sections that never outstay their welcome.
The overall character of the album is best described as musically vibrant and bright, primarily due to the use of major keys and their uplifting, tonal qualities.

The above ingredients have been mixed extremely successfully into one progressive presentation, and that’s down to the abilities and musical influences the core band members bring to the table…

John Young is not a household name in musical terms but he has quite the C.V.
Young has worked, toured or written with a great many rock, prog and pop artists including Bonnie Tyler, Asia, John Wetton, the Scorpions, Greenslade, Fish and the Strawbs.

But more importantly John Young is a musician with an inherent sense for melody, creativity and composition. And not just within the progressive format.
Young also has a number of solo albums to his name and leads the John Young Band.

Nick Beggs was a founder member of the 80s pop band Kajagoogoo, who still perform; his pop sensibilities and punchy, almost funky, bass runs bring a dimension to Lifesigns that few other prog-based bands can claim.

By musical contrast Beggs has also worked and toured with Porcupine Tree’s Steven Wilson, the guitarist, multi-instrumentalist and producer hailed as one of the leading lights in 21st century progressive rock.

Martin "Frosty" Beedle performs with the John Young Band and was an original member of the melodic pop rockers Cutting Crew.
His tight, uncomplicated drumming and percussive rhythms are the perfect foil for Beggs bass work and Young’s keyboards, the latter forming a major part of the Lifesigns sound.

The predictably progmospheric intro to ‘Lighthouse’ leads to a simple but short melody line before it ebbs away and the song surfaces in all its modern prog glory.
Truly progressive in arrangement and featuring some driving bass runs from Nick Beggs, the song carries a melodic groove throughout its opening minutes before a reflective middle section calms the Lighthouse seas.
The instrumental finale, featuring waves of stormy but melodic guitar soloing, builds to a crescendo before dissipating to the sounds of thunder, sea birds and water lapping at the Lighthouse rocks.
And this Lighthouse rocks, trust me (just not in a 4/4 beat and Marshall Amp turned up to 11 sense).

The lighter and charming ‘Telephone’ delivers both a perfect change of pace and more restrained sound.
The song could well be a relative of the Genesis soft-rock classic ‘Follow You, Follow Me’ (albeit a second cousin once removed) and its rhythmic vibe owes as much to melodic ambient pop as progressive rock.

’Fridge Full of Stars’ is also full of atmosphere, the ethereal mid-tempo number featuring lush vocal arrangements and some flute interjections from Thijs Van Leer of Focus.
It has some sumptuous, symphonic moments (not dissimilar to Swedish proggers The Flower Kings at their harmonic best) while lyrically capturing what the listener is hopefully experiencing:
“Watching the world go by, a smile upon his face…”
Couldn’t have put it better myself.

’At the End of the World’ builds from an almost melancholic and genuinely poignant beginning to a melodically rocking hook-laden number with “watch it burn, watch it fall!” lyrical finale.
The uplifting musicality of the song’s end section is seemingly tempered by the lyrical slant but, as is the case throughout the album, the lyrics are open to listener interpretation.

The highlight of Lifesigns is the closer ‘Carousel,’ featuring majestic rise and fall right from its rhythmic, pulsating get-go.
Dominated by John Young’s keyboards and cathedral like sound-scapes, Nick Beggs and Frosty Beedle anchor the piece while driving the rock sections of the multi-faceted number.
A musically dynamic end to the album and a progressive soundtrack to the carousel of life.

There are some sublime moments on Lifesigns with each of the five tracks perfectly weighted for maximum effect.
And all within an album that clocks in at just less than 54 minutes (an EP by today’s self-indulgent prog standards).

The band worked with sound engineer Steve Rispin to create a warm, layered sound and it’s probably not over-stating the case to say Rispin is the fourth member of Lifesigns, certainly as regards the studio band.

”I’m calling out, too far to hear…” cries the plaintive voice of John Young on ‘Lighthouse.’

I hear what you’re saying just fine, John; I just hope and trust many others do, too.
Because these Lifesigns deserve to be detected well beyond the borders of Prog-land.