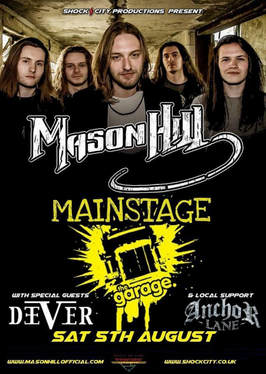 As a celebration of being signed up to Frontiers Records (a label who know a good thing when they see & hear one) and as a statement of how quickly Mason Hill are moving up the hard rock ranks, the band’s hometown gig at The Garage (moved to the main stage of the venue after their scheduled G2 club room gig sold out) was the perfect exclamation point and congratulatory party.

Not that Mason Hill were celebrating alone; they had two other bands of rock and roll brothers with them, giving the packed out Garage audience a tasty three-for-one deal.

The roar that greeted Anchor Lane’s entrance was of a volume usually reserved for a headliner, not the first act of a three-band bill, but such is the young quartet’s ever-growing live reputation and the quality of their super-heavyweight category of rock EP New Beginning it was a welcoming roar of respect and, as their blistering set proved, one thoroughly deserved.

Anchor Lane’s riffs, from the twin guitar attack of Jack Nicol and engaging front man Conor Gaffney, are so heavy you couldn’t pick them up with an industrial forklift, but the songs carry that heaviness through melody ('Eclipse'), take on a bluesy edged swagger ('Finished For Twelve') or feature interesting change-ups that keep the songs vibrant or ever-shifting, all underpinned by Matthew Quigley’s bass lines and the power-down beats of drummer Scott Hanlon (who sadly suffered from a muffled drum sound throughout).

Nor are the band afraid to dial it down or slow the pace to make a forceful point as on the slow build 'Take Some Time,' a song that allows Conor Gaffney to make himself truly heard, vocally speaking.

A three band show and working to a curfew meant it was a short, sharp thirty-minute set from Anchor Lane but one that left an indelible and ear-ringing impression on a Garage audience still shouting for more as the band left the stage.

All of which meant it was a classic case of follow that then for Deever, a new four-piece from the north-east of England led by ex Inglorious guitarist Will "Billy" Taylor and completed by the towering, tousled blond haired presence of guitarist Stevie Stoker, bassist Phil Appleton and drummer Dan Higgins.

Deever were also playing a game of double jeopardy on the night – not only was it the six-month old band’s very first gig together, they were sandwiched between two of Glasgow’s favourite emerging rock acts; that’s a hard-sell any way you slice it.

Opening with the heavy melodic rock and riffola of excellent first single 'Fire at Will,' Deever delivered a solid forty minutes worth of similar power-rock numbers, the downside being that they were so similar (but with an obvious upside of being able to refine and hone material as they progress).

And while never destined to get the sort of reception Anchor Lane received, Deever had enough in the sonic arsenal to hold the attention of a crowd now anticipating the arrival of Mason Hill, through numbers such as the driving intensity of 'Alright,' the catchy 'Monster' and a perfect sing-a-long opportunity in the shape of Billy Idol’s 'Rebel Yell' (the latter guaranteeing a full-voiced Weegie chorus would be hollering "more, more, more!" for the second time that evening). 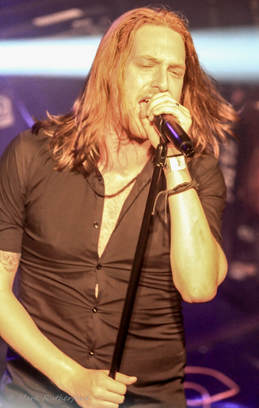 If the roar that greeted Anchor Lane filled the main room of The Garage right up to its roof, the noise levels as Mason Hill took to the stage damn near took that roof off and blew it half-way down Sauchiehall Street.

Fronted by charismatic and strong voiced Scott Taylor, the twin six-string attack of Marc Montgomery and lead guitarist James Bird and backed by some piledriving rhythmic grooves from bassist Matthew Ward and drummer Craig McFetridge, Mason Hill delivered a seventy minute set that reinforced this isn’t one of the best new heavy rock acts currently performing in the UK, this is the best new heavy rock act currently performing in the UK.

The band’s self-titled debut EP made such an impression it’s no surprise the four songs featured on it still appear in the sets some twenty months after it started to make sonic waves across the heavy rock seas.
​
EP numbers such as the dirty great riff driven 'Survive' and the swaggering, southern tinged 'Now You See Me' (recently released as the band’s first ever promotional video) are meaty and mighty examples of Mason Hill’s brand of heavy rock but it was newer songs such as the weighty 'Blame' and 'No Regret' (a monstrous slice of head-swaying rock that should come with its own mosh pit) that put the HEAVY in heavy rock.

The band also threw in a couple of covers that, while dramatically different in their heritage and style, fitted the musical sensibilities of Mason Hill perfectly.
​
A highly-charged and emotive rendition of Lynyrd Skynyrd’s 'Simple Man' featured a Weegie chorus that came close to drowning out the band while Mason Hill’s tribute to Chris Cornell was a plastic beer glasses raised high success via their absolutely nailed it rendition of Audioslave's 'Cochise,' featuring Billy Taylor on lead guitar (unfortunately his solo was so low in the mix to be almost unheard; the same problem manifested itself during Deever’s set).

For all that had gone before the best was saved for last through the heavy rock ballad 'Where I Belong,' the EP’s closing track and a number that couldn’t have had a more fitting sentiment on the night.
Scott Taylor’s high-note lifts at the end of the song, amidst an explosion of gold ticker tape, came from not just within but the energy of the audience and emotion of the night (the singer was visibly moved during the number).

Off stage, Mason Hill are five of the most personable, approachable and unassuming young men you’ll ever meet in rock and roll but when they hit the stage they become one serious but ever-smiling force to be reckoned with; a contemporary rock outfit with classic rock sensibilities and so much potential it should be illegal.

Hopefully, with the backing of Frontiers Records and the continued support of their Shock City Productions management team, that potential will be fully realised come 2018 and the debut album.

FabricationsHQ certainly hopes so because Mason Hill deserve every success – and if there is to be a rocket to higher reaches The Garage gig on the 5th of August 2017 was when the countdown to lift-off truly started. 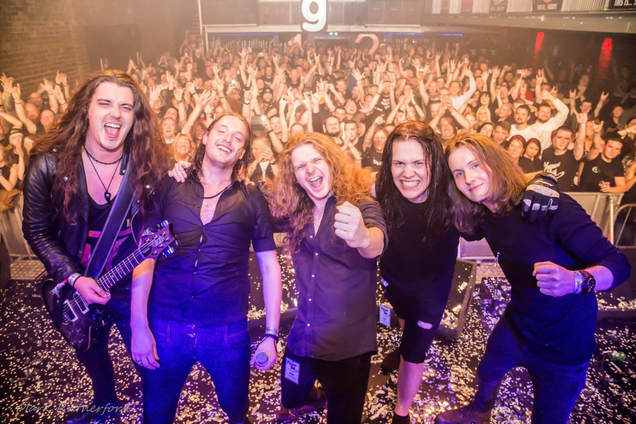