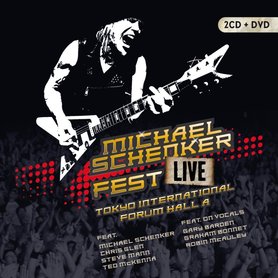 ​Another Michael Schenker live release via CD/DVD combo or Blu-ray? Didn’t we just have one last year?

2016's offering On a Mission Live in Madrid reinforced Temple of Rock's standing as the strongest Schenker led outfit since the original MSG days; the show featured a powerful band performance and a best of both worlds set that mixed top Temple tunes with MSG, Scorpions and UFO classics.

Michael Schenker Fest Live is a classic rock case of all the pieces coming together and all the (rock) stars aligning for a 21st century revisit of what was, and remains, some of the finest and most successful musical moments of Schenker’s career under his own name – the original Michael Schenker Group era (1980 to 1984) and later McAuley Schenker Group (1986 to 1993).

Filmed and recorded on the 24th of August 2016 at the Tokyo International Forum, featuring lead vocalists Gary Barden, Graham Bonnet and Robin McAuley and backed by an excellent band of MSG brothers Chris Glenn (bass) Ted McKenna (drums) and Steve Mann (keyboards, guitars), Michael Schenker delivers classic era MSG (plus a couple of obligatory Scorpions and UFO numbers) with a scintillating performance in front of five thousand fans who double as the MSG Chorus ('Cry For the Nations' being a particularly notable, full-voiced example).

It’s also evident by watching the show that the band were having fun and rekindling old musical friendships, as was confirmed recently by Chris Glen to FabricationsHQ ("it was just like the first time around – a Second Honeymoon!")

Opening with the tour-de-force instrumental 'Into the Arena' (preceded by the intro music of Temple of Rock's 'Searching For Freedom'), the band then back Gary Barden on five original era MSG numbers including the definitive MSG rocker 'Armed and Ready,' the aforementioned 'Cry For the Nations' and 'Attack of the Mad Axeman.'

While time doesn’t tell so much on seasoned and talented musicians it does, inevitably, tell on many a rock vocalist who have given their chords to the cause over the decades – in the case of Gary Barden his core vocal remains but the higher tenor notes are intentionally ducked.
Paradoxically, while the original highs on the vocal bridge of 'Axeman' are posted missing it actually makes for a better "rock" performance of what is one of the strongest songs in the MSG repertoire and the Michael Schenker six-string arsenal.

The pleasant surprise of this MSG Fest and a true highlight among many is just how good Graham Bonnet is vocally (still an incredibly strong singer at a now 69 years young, he has been Greatest Hit and Miss live on occasion).

Graham Bonnet had but a fleeting part to play in the history of MSG (the studio album Assault Attack) but that release delivered a handful of MSG classics including the three songs featured here (which follow the Scorpions instrumental 'Coast to Coast') – a crunching version of the title track, the mini-epic 'Desert Song' and the infectiously engaging hard melodic pop of 'Dancer.'

On the latter Graham Bonnet is backed by both Gary Barden and Robin McAuley for what is a fun, sing-a-long number but one that suffered ridicule back in the day – not so much for it's poppified arrangement as for sporting one of the most unnatural or forced phrasings in a pop-rock chorus just to get the lyric to scan ("she’s a great dancer… not i-dee-ally built for ballet…")

The quirky 'Captain Nemo' allows the band to instrumentally stretch once more before Robin McAuley returns to the stage for three numbers including the pedal down rocker 'Save Yourself' and the AOR rock brace 'This is My Heart' and 'Love is Not a Game.'

Robin McAuley also takes the lead for the UFO finale of 'Shoot Shoot' and 'Rock Bottom,' the latter allowing Michael Schenker to flex his six-string muscles in an extended workout that proves, once again, that the legendary rock guitarist is back at the top of his game.

Encore/ final song 'Doctor Doctor' is another excuse for the Tokyo faithful to lend a voice to proceedings but with all three vocalists sharing vocal lines, singing loose and a decidedly party atmosphere attached to the last song of the night, it’s not the tightest version you'll ever hear of the UFO classic.

But as a celebration of a lauded past, Michael Schenker Fest Live is just what the Doctor Doctor ordered.