The Return of The Mad Axeman
Michael Schenker’s Temple of Rock – Edinburgh Queen’s Hall, January 22nd 2016
UFO’s Strangers in the Night was one of the first rock albums I was exposed to as a teenager; I played the cassette into magnetic dust as I couldn’t get enough of classic anthems like 'Doctor Doctor' and 'Lights Out.'

Much of that classic anthemery was due to the guitar talents of Michael Schenker; his career has had its fair share of ups and downs in the ensuing 35+ years but he has certainly reinstated that classic sound with his new band Temple of Rock, currently doing respectable business with latest album Spirit on a Mission.

It’d been ages since I’d been to a good old-fashioned old-school rock-metal gig (and what better way to spend a Friday night than in the company of Temple of Rock at a packed Queens Hall) so I was pretty much ready for whatever the Mad Axeman chose to inflict upon us.

Predictably, the set was dominated by classic tracks culled from Michael Schenker’s previous stints in UFO, the Scorpions and his original solo band MSG.
You could certainly feel the excitement go up a notch whenever one of these classics was rolled out, be it 'Rock Bottom,' 'Natural Thing,' or even the unusual choice of 'Rock You Like a Hurricane' (Schenker didn’t play on the latter recording but Temple of Rock’s rhythm section Francis Buchholz and Herman Rarebell did, making Scorps' classics such as 'Hurricane' and 'Blackout' fair game).

UFO’s 'Too Hot to Handle' was a highlight – not necessarily my go-to UFO song, but the band and audience really seemed to riff off each other one this one, with its catchy chorus and groove. 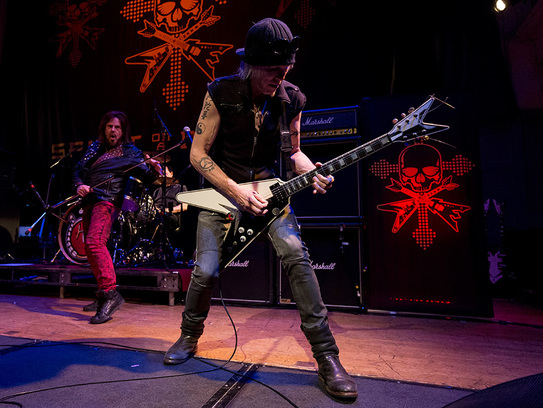 The inclusion of MSG’s 'Victim of Illusion' was an interesting choice, and not one that fans would have presumed to be on the playlist, but it worked really well played in between the newer and heavier Temple tracks.
For the most part those newer tracks worked well, particularly singer Doogie White’s spirited take on 'Lord of the Lost and Lonely' and 'Vigilante Man.'
Other tracks such as 'Good Times' and 'Rock City' didn’t fare so well however, coming across as well-intentioned but clichéd, leading to a drop off in audience energy.

But that was the only lull in the 100 minute set, the Queens Hall crowd loving absolutely everything else they were hearing (and singing along to in fine voice), which clearly encouraged the ever-smiling Michael Schenker to deliver his best (his past record has had its ups and downs on stage but tonight he was pretty much the "guitar hero" on top form, belting out solo after solo on his signature Dean Flying V guitars).

The rest of the band weren’t resting on their laurels either, and I particularly enjoyed Francis Buchholz’s tasty bass lines.
It’s easy to neglect the bass guitar contribution to the sound as it can easily get lost in the guitar riffage, but at one point Buchholz stopped playing to concentrate on some audience participation; when he started playing again, the sound immediately became ballsier.

It’s heartening to see musicians with such an historic pedigree still bringing their A-game on stage, reminding us how much their classic song repertoire has stood the test of time while still producing new material that’s just as exciting and relevant.

The Spirit carries on!