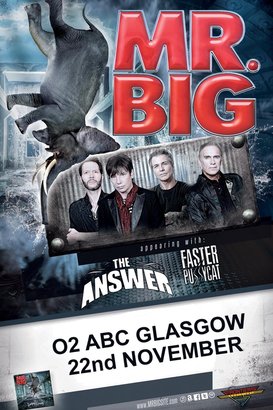 But it’s all rock and roll, baby – although with the hall just beginning to fill (courtesy of an early start and many ticket buyers keeping their power dry until The Answer and Mr. Big turned up) it was a relatively small audience that got a taste of the feisty 'Cat quintet (still led by vocalist Taime Downe) in the early going and quintessential 90s LA rock numbers 'Jack the Bastard,' 'Cathouse' and 'Slip of the Tongue' (think Aerosmith at their most unsubtle and punky for that last 'un... and you’re still not close).

But by the time the band hit the closing straight with slower, bluesy ballad 'House of Pain' and set closer, the punk-metal stomp of 'Babylon' (including a short, sharp and frantic blast of 'Ace of Spades') a decent sized crowd were present to show their appreciation for a bunch of Pussycats who might not be any faster than they were back in the LA day, but are still as raucous.

Debates, conversations and arguments about the greatest bands never to make it to the big-time will go on for as long as rock and roll does but in the "how are they not huge?" category The Answer might well be the ultimate poster boys.

The Northern Irish quartet (vocalist Cormac Neeson, guitarist Paul Mahon, bassist Micky Waters and drummer James Heatley) were heralded as the next big thing even before their attention grabbing and outstanding debut album Rise was released in 2006.

But, for whatever reasons, their Rise (sorry) to predicted arena rock glory (or at least recognition and album sales successes on par with a band such as Thunder, who were touted as the next big thing in rock in the early 90s – and were) never happened.

True, not every subsequent release matched the heights of the debut, but choice live cuts including the made for arena rock (somewhat ironic given the last paragraph) of 'Spectacular' and the emotionally charged, Celtic-tinged rhythms of ballad 'Strange Kinda’ Nothing' equalled the Rise tracks performed (the pacey, southern-tinged 'Preachin' and set closer, the band's pedal down anthem 'Come Follow Me').

There was also the bluesy sway of 'Faith Gone Down' (a song that deserved a better fate than part of a rarities disc that came with the initial run of third album Revival) and 'Solas,' the muscular and spacey set opener and title track of the band’s last album (Solas, which carries a broader sound and deeper lyricism, is a change of direction for the band but one that works superbly well).

Add in a belting cover of 'If You Want Blood' as a tribute to Malcolm Young, who passed only four days before this gig, and you have yourselves an equally belting 45 minute set.

On the basis of this performance, what aren’t these four rocking boys from Northern Ireland bigger?
To that question, I truly don’t have The Answer (sorry again, but you knew that one was coming).

Unlike The Answer, Mr. Big are still as large an attraction as they were back when the broke through commercially with second album Lean Into It in 1991. Or at least are in comparative terms.
None of us, not even the Mr. Big boys, are going to kid that it’s still the platinum and gold plated 90s but, twenty-eight years on from being Addicted To That Rush of fast fingered virtuosity from uber-players Billy Sheehan and Paul Gilbert, high calibre vocality from Eric Martin and some serious percussive weight and drum style from Pat Torpey, the band are "still rolling," albeit the platinum and gold coloured days have changed their hues to the black and white reality of how success is now measured.
(All that said the band are still a Top 10 album charter in Japan where they still fill the largest halls).

In many ways little has changed for Mr. Big.
Messrs Sheehan and Gilbert are still as fleet fingered as ever – emphasised immediately on rapid fire opener 'Daddy, Brother, Lover, Little Boy (The Electric Drill Song);' the song’s bracketed suffix then comes to live life when Sheehan and Gilbert run power drills across the strings with their right hands while the fingers of the pair’s left hands run the frets.

Similarly Eric Martin can still deliver on his instrument, the voice; he might not have the top end he once had but he’s on song and on vocal point for the two What If numbers (the band’s 2011 reunion album) that follow, the pacey 'American Beauty' and the heavy melodic punch of 'Undertow.'

The one noticeable difference is in the engine room where the rock solid Matt Starr (Ace Frehley, Burning Rain) has become the band’s touring drummer (since 2014).
Starr also carried most of the percussive load on the band’s latest and current album Defying Gravity, Pat Torpey having been officially diagnosed with Parkinson’s Disease in 2014 and unable to perform normal drumming duties.

It was quite the surprise then (for those in the audience unaware that the band tour as a five piece) when Pat Torpey was introduced on to the stage, and to one of the loudest cheers of the night, to play percussion on the band’s Stonesy and swaggeringly bluesy number, 'Alive and Kickin,' (and a handful of others throughout the show) as well as getting behind the kit for 'Just Take My Heart.'
While he may have been taking his lead from the trio out front, Pat Torpey was on the beat throughout, giving the ballad the rhythm and pulse it needed.

Mention of the Lean Into It hit leads to the perhaps obvious confirmation that Mr. Big’s second album was well catered for; five Lean Into It songs were performed including the melodic-hard pop and harmonic hooks of 'Green Tinted Sixties Mind' and, of course, their biggest chart success, the simple but beautifully effective vocal-led ballad, 'To Be With You.'

But this is a band that don’t have to rely on their Mr. Big-time past for their present day operations.
The excellent Defying Gravity, arguably their best outing since Lean Into It, matched that much vaulted release with five numbers of its own, including the big beats and bluesy underbelly of 'Everybody Needs a Little Trouble,' the rockin’ groove of 'Open Your Eyes' and '1992,' the latter a wonderfully self-effacing, nostalgia-rock nod to high-charting successes of the past.

The results of all the above were a band on fierce form, scuppered only by the we-all-knew-they-were-coming solo spots from Paul Gilbert and Billy Sheehan, which only succeeded in breaking up the continuity of a great song after great song set and an otherwise outstanding show and excellent performance.

Such spotlight soloing has been a part of Mr. Big’s live repertoire since day one, but this is a different performance day and audience age (making Eric Martin’s continual "hey kids!" lines all the more laughable; I’m the same age as the average age of Mr. Big, Eric, behave yourself).
Suffice to say there is little place for those solos now, especially as Paul Gilbert and Billy Sheehan are so fluid, sinewy and expressive with their respective six and four-string musicality that solo spots are not just unnecessary, but completely redundant.

However a mid-set acoustic interlude (Cat Stevens' 'Wild World' and Defying Gravity’s lightest moment, the foot-tapping fun of 'Damn I’m In Love Again'), a suitably blistering 'Addicted To That Rush' and an encore of the snappy, hard pop 'n' roll of 'Defying Gravity' followed by '30 Days in the Hole' (the Humble Pie classic also featuring members of Faster Pussycat and The Answer), helped redress the balance.