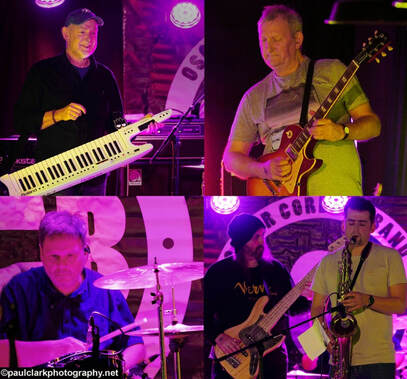 Covering and reviewing a lot of gigs doesn’t necessarily guarantee regular sightings of, or commentary for, favoured or local area bands who have been going about their musical business (in well worth the watch, listen and reporting form) for a good number of years.

In this reviewer’s case that would certainly include the Glasgow based Oscar Cordoba Band.

A fusion quartet/ quintet who incorporate both rock and jazz in equal measure (with equally impressive results), FabricationsHQ has always liked the cut of their fusion jib and rated their three-track EP from 2018 (featuring the seriously impressive 'New Scotland Yard') highly.

Yet musical fate and wrong place wrong time circumstances meant your reviewer had not caught the band live since they supported the Pat Travers Band in Glasgow back in late 2013.

It was good news then to be able to catch up and report on the band’s recent gig at the Blue Arrow in Glasgow, which doubled as an album launch show with a difference – the difference being there was no album to launch (more on which later).

Even better news was the Oscar Cordoba Band, live, are more polished in their grooves and more intricate in their jazz-rock structures than they were six-and-a-half years ago.
They also know how to get the attention of a jazz-rock loving audience early, by kicking off with a 45 minute opening set that was pretty much fusion’s greatest hits.

If fusion be your bag you cannot go wrong with a set that includes the likes of 'Tommy' (guitarist Sam McCulloch, who was on fine form throughout, hitting those classic Jan Akkerman notes with sustained aplomb), Jeff Beck’s lazy-groover 'The Pump' and Beck’s emotive ballad, 'Cause We’ve Ended as Lovers.'
There was also another famous Tommy in the shape of the Bolin brace 'Homeward Strut' and the late and truly great guitarist’s Purple shaded Gershwin tribute, 'Owed to G.'

Given the intricacy of some of the songs it was a pleasure to watch a band who were tight and tidy throughout, from keep-it-simple (relatively speaking) but always on the ever-changing beat work of drummer George Falconer to Nelson McFarlane’s five-string bass grooves and funkier explorations and the solo lines, synth-strings and textured atmospheres created by keyboardist (in this case keytarist) Kenneth Clark.

That said there were a couple of (not overly noticeable) flubs on 'Zoot Allures,' the ultimate Zappa challenge for any band courtesy of an instrumental that is deceptively difficult to pull off with a 100% pass rate.
Kudos to the band then for readily acknowledging said flubs via Nelson McFarlane (who acted as song introduction host over the two sets), who admitted they rehearsed the song for six months and in retrospect should "probably have rehearsed a little longer" (fusion humour).

'Put it This Way' (and the Oscar Cordoba Band certainly did on the Colosseum II classic, George Falconer featuring on some tasty drum flourishes) ended a set that was both well received and very much appreciated by a fusion fueled audience. 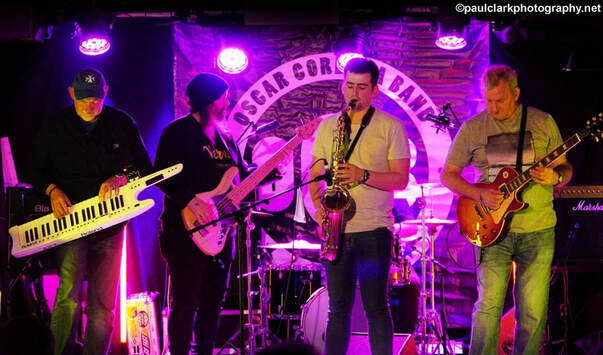 The second and slightly longer set was a mix of covers and originals that should feature on the album yet to come (scheduling and availability of those involved mean the album has still to be completed) but as a new material and classics reinterpreted preview it bodes very well for the full-length debut.

The band were joined on their second set by Glasgow musician (and Nelson McFarlane’s son) Neil McFarlane on saxophone.
The younger McFarlane, who will feature on the forthcoming album, recently released the contemporary jazz flavoured Harmonic Chances, thus beating the old man and his musical compadres to the debut album punch.

'New Scotland Yard' was unsurprisingly a classy, 80s styled jazz-rockin’ highlight as were other originals 'Sweet Poison' and the Latin-esque vibe of 'Picardia Criolla.'
The Simon Phillips Protocol brace of 'Moments of Fortune' (the smooth and harmonious number working well in its sax, guitar and synth arrangement) and funky fusion groove of 'All Things Considered' were stand-out moments, as was Neil McFarlane’s featured role on Pat Metheny Unity Group number 'Born.'

In short it was a set hard to fault, other than the sound mix which, while extremely well balanced, had the soloists audibly too high or too subdued on a few occassions.

Such issues did not however detract from the quality of material or cohesiveness of sound from a band who are hailed as Scotland’s best jazz-rock/ fusion outfit – a claim that should be only reinforced when the debut album sees the light of day.