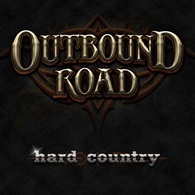 When Florida-based rock drummer and studio engineer Sean Shannon got together with country-rooted vocalist and guitarist Billy Varnes, they didn't just musically gel and create a strong songwriting partnership.

Nor did they just go on to form the guitar-driven four piece Outbound Road and produce the ridiculously solid debut album that is reviewed here.

They also mixed together the best of hard rock, southern rock and American country to produce a fresh perspective on those musical genres – and created a brand new sound, which they call “Hard Country.”

Originally from upstate New York, Sean “Cannon” Shannon is as comfortable sitting at a studio console as he is sitting on a drum stool. He has worked, recorded and toured with such rock legends as Molly Hatchet and the Pat Travers Band, to name but two.

Soft spoken but big voiced Billy Varnes was raised on country music in Florida and the part Cherokee is a true southern gentleman with an inherent sense of harmony.
Varnes hails from a roots country background but his influences range from traditional country to southern rock to rhythm and blues.
And Billy Varnes isn’t just a great singer; he’s a great guitar player.

Varnes six-string partner on Hard Country is Angelo Janotti, who provides some tasty harmony and lead guitar work to compliment Billy Varnes own guitar grooves. Janotti also plays some mandolin on the album.
Four-string duties were originally handled by Willy Bouton but the guitar talents of Mario Ticlea and bassist Jamie Baker have since replaced Janotti and Bouton, respectively.

The album opens with the title track, a slow burner that cranks up the amps on the choruses and kicks into a higher gear on the solos and ending.
'Hard Country' tells the all-too-common and current economic tale of tough times for the honest, hard-working man.

'Livin' Out My Dream' follows and is the first of a number of songs (including 'A Second Chance Again') that successfully mixes country, melodic rock, twin guitar harmonies and guitar interplay to produce the distinct, Outbound Road blend.

The band step it up for the feel-good rockin’ rhythm and blues of ‘I Keep Comin’ Back’ before the guitar-led southern-rock power ballad 'Home of the Brave' plants its American, not Confederate, flag and quickly develops into a mini-anthem.
Billy Varnes powerful and heartfelt plea to “bring back the America we once knew” has already got audiences not yet familiar with the song singing along to Outbound Road’s take on the American Dream – and where the hell it went.

‘I’m Your Man (No Matter When)’ is the first of the rock ballads on the album and lyrically and musically hangs its cowboy hat proudly on the hook and harmonies of American country.

‘Burning For You’ is a punchy, hard melodic rock song that recalls 38 Special at their early 80s peak before they went over the AOR cliff, while ’Home to Me’ slows the pace one more time.
The latter is another song flying the American country flag, with a tag chorus line of "I like things you can’t buy with money, I like the simple life with my honey."
You don’t get much more country that that.

‘Half the Man’ is perhaps the stand-out track on Hard Country.
A slow-paced southern rock song of respect, paying homage to a father that is owed a debt of gratitude and honoured for the man he was.
It’s powerful, poignant and hits a musical and personal spot.

The ballad ‘A Simple Kinda Love’ is another example of Outbound Road’s crossover style – as much slow rock ballad in its arrangement as it is country-themed in its vocal harmonies.

'A Simple Kinda Love' would have been a great closing track but ‘Put the Pedal Down’ (with guest appearance from Pat Travers on slide guitar) closes the album in fine raucous and roll style.

Hard Country was produced by Malcolm Springer (Matchbox 20, Collective Soul) and Sean Shannon. Springer locked down the basic arrangement tracks while Shannon did the rest of the production including mixing and final mastering.

The lyrical themes on Hard Country, along with the country and southern rock influences mean Outbound Road could only be an American band, but the quality of their songs guarantees both band and album will have a global appeal.

In short?
Hard Country is an excellent album, chock-full of tracks that deserve to be heard on mainstream, rock and country radio stations on both sides of the pond.
And here should endeth the musical lesson, but I have to conclude this review with a confession...

American Country, in its purest Grand Ole Opry form, is one of the musical genres I have absolutely no time or ear for. It usually has me running for a pair of noise-cancelling headphones and an iPod full of Pat Metheny as the aurally injected antidote.

But not when it’s fermented, distilled and poured from a bottle of the harder stuff labelled Outbound Road.

Gentlemen, I raise my glass to the musical genre and album that is Hard Country.
And I tip my ten gallon hat to you. Well, I would if I wore one.


The following audio tracks are presented to accompany the above review and promote the work of the artists. No infringement of copyright is intended.