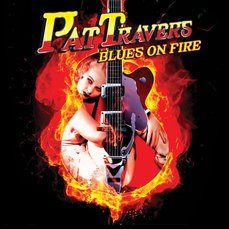 After a critically acclaimed rockin’ blues period with the Blues Bureau label in the 90’s, Pat Travers re-established the classic Travers sound with the solid PT=MC2 (2005) before confirming the Pat Travers Band were alive and well in the 21st century with the release of the excellent Fidelis (2010).

But Pat Travers has returned to the blues for his 2012 solo release and this time he’s gone back to some of the old-time standards that helped shape the sound of modern blues.

Blues on Fire features songs that date back to the 1920’s and were part of the era that would become known as “the birth of the blues.”

The twelve covers on the album are fresh, modern interpretations of the eight-decade old standards with gritty vocals and even grittier guitars.
There are acoustic-led numbers on display and some piano and organ runs that add to the various shades of blues, but most of the songs put a rock edge on the old-blues.

The opening number, the rag time blues of Blind Arthur Blake’s ‘Black Dog Blues’ gets a great raw and riffing makeover and is the lead-off single from the album.

‘Meat Shakin’ Woman’ (by the great rag time guitarist Blind Boy Fuller) gets a similar, punchy rock and roll update while Blind Willie Johnson’s ‘Nobody’s Fault But Mine’ is closer to the original and features some nice acoustic slide touches from Travers.

The slower side of the blues is represented by ‘Back Water Blues,’ made famous by legendary blues singer Bessie Smith and including almost obligatory for the genre “woke up this morning…” lyrics.
Bessie Smith was also one of many to put their blues or jazz stamp on the standard ‘Nobody Knows When You’re Down and Out’ and the Blues on Fire version has a great honky-tonk barroom blues arrangement.

There’s not many great names from the orignal blues era that Pat Travers doesn’t pay homage to – ‘You Can’t Get That Stuff No More’ is a fun and funky blues take of the Georgia Tom Dorsey and Tampa Red classic, while Blind Lemon Jefferson and Blind Willie McTell are acknowledged via ‘Easy Rider Blues’ and ‘Dark Night Blues’ respectively.

The delta blues of ‘Death Letter’ closes out the album and Travers’ slow cover of Eddie “Son” House’s signature tune is faithful to the original – bare blues vocal accompanied by acoustic country-picking and slide guitar.

Blues on Fire has a full-band vibe and solid sound but the fact of the musical matter is most of the instruments are played by Pat Travers with keyboard lines added by Carl Cleaver and Doug Bare.
Drummer Sean Shannon also features and played a major role in production.

The album was recorded at Shannon’s MixMonsterz home studio in Florida and the drummer is as talented mixing, mastering, engineering or sitting at a production desk as he is providing percussive duties.

The Blues Tracks albums had blues aficionados warming to Pat Travers and Alligators had some hot musical moments, but Travers’ feisty take on the old-time standards has put the Blues on Fire. 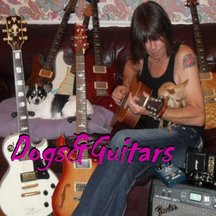 For those that would like to follow their main course of old-blues flambé with an all-new Travers desert, a four-track EP of all-original material is also available.

Dogs & Guitars has been released to coincide with the release of Blues on Fire and is, remarkably, the first-ever Pat Travers EP.

The melodic and mid-tempo ‘Waiting on the End of Time’ is the lead-off track and would sit comfortably on any Pat Travers album.

The song has a great guitar-driven groove and has a musical vibe and sound reminiscent of Travers’ early-80's Radio Active era, while lyrically reflecting on teenage days, five bucks for the weekend and the highway of life ahead of you.

‘The Answer is You’ showcases the lighter, soft-rock side of Pat Travers and features some six-string melody textures from Pat Travers Band guitarist Kirk McKim (who also appears on ‘Waiting on the End of Time').
The song was written for Pat’s wife Monica, who fittingly sings backing on the track along with their daughter Amanda.

The highlight of the EP may well be the simple but superbly effective ‘Never Let You Go’ which was worked up, recorded and completed in under one hour by Travers and Sean Shannon.
The doo-wop backing and call-back chorus vocals from Monica and Amanda Travers are the perfect finishing touch to the feel-good rock 'n' shuffle number.

’Day at the Beach’ closes out the quartet of tracks and is a laid back, open-tuned 12-string guitar instrumental, with added drums and some background sounds incorporated for a little outside ambience.
The title perfectly describes the piece and vice versa.

Dogs & Guitars can be purchased direct from the official Pat Travers website and if you order nicely you’ll find your CD will be individually numbered and signed by the man himself.
Actually you'll probably find it comes signed, sealed and delivered as a matter of course because Pat Travers isn’t just one of the true rock guitar greats, he’s also one of the nicest guys in rock and roll.

Blues, Dogs and Guitars – what more could you ask for?


Dogs & Guitars EP ordering and purchasing link: http://www.pattravers.com/html/ep.html
Audio track and promo sampler presented to accompany the reviews and promote the work of the artist. No infringement of copyright is intended.