Reserved for the top table
Pat Travers Band - Can Do 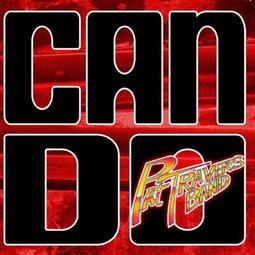 Pat Travers has been in a rich musical vein of form of late.

The solid but criminally under-heard Fidelis (2010) was followed by the equally worthwhile Blues On Fire (2012), a collection of 1920’s blues standards with a rock-edged twist.

And now Can Do, which carries the sound and vibe of the high-energy Heat in the Street album, enthused with plenty of melody, harmonies and the subtleties of the spacier Radio Active.

All of which tells you Can Do unashamedly and intentionally hearkens back to that late 70’s and early 80’s Pat Travers Band albums, right down to the iconic Pat Travers Band logo (not seen on a cover since the band’s classic 1980 release Crash and Burn).

But in amongst the gritty yet melodically built rock guitar tracks are reflective moments, an interesting cover, an instrumental (a Pat Travers trait back in the day) and a bluesy groove or two.

Pat Travers is in fine form throughout Can Do, both vocally and musically, and the current Pat Travers Band is as strong a line-up as you’ll find this side of the acclaimed Travers - Pat Thrall - Peter “Mars” Cowling - Tommy Aldridge quartet.

Texan guitar slinger Kirk McKim is the perfect six-string partner for Pat Travers and a fine lead guitarist in his own right.
Rodney O’Quinn can anchor or drive the sound with equal measure and is the first bassist to have played with Pat Travers that can rightfully be compared to “Mars” Cowling in ability and inspiration.
The big beats and percussive panache of Sandy Gennaro returned to the fold in November 2010, Gennaro having served his first tour of duty with the Pat Travers Band in the early 80’s.

Sean Shannon, the powerful drummer and studio producer who played on Fidelis and Blues On Fire, also contributes to Can Do, both behind the kit and with an excellent job at the production and mixing desk.

Opening with the feisty and vibrant title track, the big guitar sound of Heat in the Street is back and just as ballsy, backed by twin-harmony leads, melodic interjections, gutsy lead vocal and a punchy chorus.
‘Can Do’ is guaranteed to become a PT classic and a staple of the live set for years to come.

The raunchy and funky ‘Stand Up’ also recalls the hard melodic rock past (with lead guitar lines reminiscent of the guitar tone and style employed on Radio Active) before the volume drops a notch for the American coastal sound of ‘Diamond Girl,’ all bright guitars and harmonics.

The hard rock and harmony guitars return for the mid-tempo ‘I’m With You,’ a song that contains an incredibly simple yet ridiculously infectious chorus hook.
‘Long Time Gone’ then picks up the pace and thunders out the speakers like a freight train at full speed, delivering its big chorus cargo and message of early musical roads, teenage years and how “those were the days.”

The past is also revisited on ‘Wanted (That Was Then, This is Now)’ an atmospheric, rhythmic and slow-tempo number that lyrically recalls a very different time.
The Pat Travers Band have never been the darlings of the melodic rock charts (nor geared to be), but if Bon Jovi recorded ‘Wanted’ they would have a song that was never off the radio.

The rhythm ‘n’ slide blues of ‘Armed & Dangerous,’ with its roots in southern Floridian rock, precedes the surprise of the album…

The Eurythmics 1984 electro-pop hit ‘Here Comes the Rain Again’ is given a rock-reggae treatment, floating guitar leads, a pumping bass line and a big-beat chorus featuring Pat Travers’ wife Monica on backing and harmony vocals.
It’s the grower of the album and clearly the hope is lightning can strike twice, based on the airplay received for the cover of Bob Marley’s ‘Is This Love?’ the surprise highlight of Crash and Burn.

The groove of ‘Here Comes the Rain Again’ is continued with the spacey instrumental ‘Keep Calm & Carry On’ before the rockin’ blues of ‘Dust & Bone’ heralds some foot stompin’ fun.

The melodic ‘Waitin’ On the End of Time’ gets a deserved outing on a full-length Pat Travers album, having first featured on the 2012 Dogs & Guitars EP.
The song has a musical vibe and sound reminiscent of the Radio Active era, while lyrically reflecting on teenage days, five bucks for the weekend and the highway of life ahead of you.

The rock ‘n’ honky tonk roll of ‘Red Neck Boogie’ closes out yet another incredibly strong release from Pat Travers, who is currently producing some of the best music of his career.

Fidelis is a more instantly accessible album; Blues on Fire is a great set of old blues covers.
But Can Do, which takes multiple plays to get the very best out of it, is, sonically and song-wise, the perfect calling card for the Pat Travers Band to re-establish themselves at the top table of classic rock.

It's also as solid a guitar rock statement as you’ll hear.