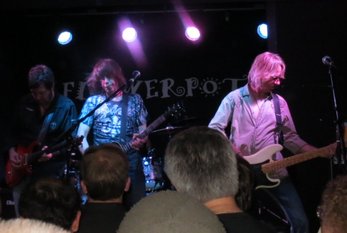 Little did I know back in 1977, when I got my first taste of Pat Travers in the form of the Makin’ Magic album on cassette, I would become a loyal fan for the next three and a half decades.

And little did I know that, thirty-five years on, I would be doing an official concert review for my good friend Ross Muir and FabricationsHQ…

I first saw the Pat Travers Band at the famous Glasgow Apollo (co-headlining with Journey) in 1979 and subsequently on their own headlining UK tour a year later at the same venue.

I have since sought Mr. Travers and band out whenever and wherever possible; great gigs in Edinburgh (The Venue, 1990) and London (Mean Fiddler, 1999) immediately come to mind.

Ross Muir has championed the cause of Pat Travers since the rock and blues guitarist was first Makin’ Magic and one of his 'Muirsical' jobs these days is running press and promotion for Pat in the UK.
Ross showed me the FabricationsHQ press-sheet for the UK tour – and pointed directly to the Derby date which coincided with a trip I had already scheduled for Derbyshire.
Right place, right Travers time.

The Flowerpot is a pub specialising in real ale and live music (and is picking up a strong reputation on the UK club-gigs circuit).
A fine combination, especially when the music packs a punch as strong as the ale!

Gwyn Ashton, no stranger to the UK touring circuit, was support on the night and entertained the small but vocal crowd for some thirty minutes with a slice of high quality blues rock.

The Pat Travers Band has seen many line-up changes over the years.
Talented notables that have been part of the band’s history include Pat Thrall, Tommy Aldridge, Peter “Mars” Cowling, Jerry Riggs and Sean Shannon.

The current band features PT, Kirk McKim (guitar), Rodney O’Quinn (bass) and Sandy Gennaro (drums). Sandy is on his second tour of duty with the Pat Travers Band having been part of the group in the early 80’s.
The concert at the Flowerpot coincided with Rodney O’Quinn’s birthday and Rodney is also band manager.

The music room within The Flowerpot is compact with a smallish stage and has a capacity of just 250.
But a rock and roll act in that sort of venue makes for a great atmosphere and by the time the band came on stage the venue was close to capacity and the crowd were very enthusiastic.

Most of the audience were concert veterans and had almost certainly seen the PTB on previous occasions. I did spot a couple of 20-something’s in the crowd, encouraged likely by their more knowledgeable elders!

The band opened up the show with a bang.
'Rock ‘n’ Roll Susie' from the aforementioned Makin’ Magic album started proceedings and was one of my first, favourite PT songs.
I did notice immediately that Pat is much slimmer now than when I last saw him – well done Pat!
Sadly, I cannot say the same for myself…

Next up was 'Crash and Burn,' the title track of the Pat Travers Band’s classic album from 1980.

The fast pace resumed with another title track, 'Heat in the Street,' with Kirk McKim proving to be a very capable guitarist, swapping guitar solos with Pat regularly.
And with some aplomb.

A shout of “my pappy said son you gonna drive me to drinking” from an audience member set Pat off on a 90-second impromptu rip of 'Hot Rod Lincoln,' much to the bemusement of his band-mates!
Long-time fans know PT has been doing cover versions since his debut album days (when he recorded 'Hot Rod Lincoln') and fittingly a number of covers followed including 'Black Betty,' which went down a storm.

A track from Pat’s current album Blues on Fire featured – the rocky 'Black Dog Blues' – and the blues theme continued with 'Red House.'
But it wasn’t all blues vocals and guitars – Sandy Gennaro entertained the crowd with a great drum solo of perfect length (in other words not one that drags on).

It was almost inevitable that 'Stevie' would feature and thus it was no surprise when the opening flurry of notes introducing that PT classic came from Pat’s trusted guitar.
Yet another classic followed in the shape of 'Snortin’ Whiskey.'

The mid-tempo 'Josephine' from the Fidelis album (released in 2010) was up next; a great track from a very good album but, sadly, not one of Pat’s best known releases in the UK.

The set ended with the obligatory audience participation and 'Boom Boom (Out Go the Lights).'

As a sign of appreciation from the small but enthusiastic crowd the band returned to the stage for a rendition of 'Gettin’ Betta’ from the Putting It Straight album.

The Pat Travers Band may be playing to club crowds in the UK these days but they are still here to kick your ass in the 21st century.

This band is a tight unit, complementing each other well and clearly enjoying themselves on stage.

Go for What You Know to be right – catch them live.