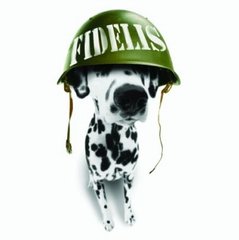 Pat Travers has, as the title of his seminal second album suggests, been Makin' Magic for three and a half decades.

Not that it's been plain sailing for the noted Canadian guitarist.
After a commercially successful and critically acclaimed decade (from the mid-70's to the mid-80's) circumstances, not of his own making, dictated that there would be six years between the melodic rock of Hot Shot (1984) and his comeback album, the perfectly titled School of Hard Knocks (1990).

But a lot can happen in six musical years as regards changing fashions, what sells, how quickly you can be forgotten and Pat Travers did suffer.

Travers got into a blues groove in 1992, recording albums for Blues Bureau International Records, but was still playing with as much musical passion as he had in his original period of success and still giving 100%.

And so to Fidelis.
Building on the musical rock foundations of PT=MC2 five years before it, Fidelis is arguably the best Pat Travers album since the criminally under-rated and under-heard (take a bow, Polydor Records) Black Pearl album of 1982.

The opener, the hot and good-time rockin' 'Ask Me Baby' and the following number, the slower but no less raunchy 'Edge of Darkness' set the tone, although some of the finer moments are the lighter tracks such as 'When I'm With You' and 'Stay.'
The latter could be described as a guitar-led power ballad but where 'Stay' differs from other Travers guitar ballads, such as the classic 'Stevie,' is in its stripped back, limited overdubs approach, as is the whole album. And it's all the better for it.

Another plus for Fidelis and its songs is the clear chemistry and comfort zone that now exists in the latest version of the Pat Travers Band, aided and abetted by Kirk McKim on guitars, Sean Shannon powering the band from behind the kit, and Rodney O'Quinn on bass.
Special mention must go to O'Quinn, who compliments Travers and band in a way not seen or heard in a Pat Travers Band line-up since the departure of Peter "Mars" Cowling (Travers' right-hand man throughout the 70's, 80's and appearances up until 1993).

Fidelis finishes in typical Pat Travers style.
The penultimate number 'Yeah Yeah' is, to all intents and purposes, an instrumental; on his non-blues recordings Travers usually featured at least one instrumental on each album.
The closer, 'So Missing You,' is a slow-rocking slide-blues number that reflects Travers' blues sensibilities that were on display so prominently in the 90's.

Perfect title too, and one that works on a number of levels, not least between Patrick Henry Travers and his loyal fans.