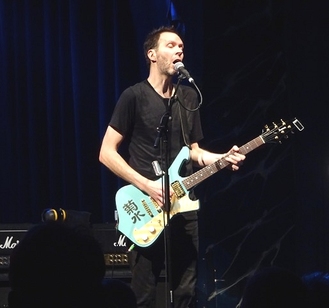 Leamington Spa’s rather grand Assembly venue (built as a dance hall in 1926, major refurbishments in 2008 have retained many original features including the art-deco interior) hosted the first night of Paul Gilbert’s clutch of UK tour dates in promotion of his latest release I Can Destroy.
Produced by Kevin Shirley, the fourteenth studio album to carry the Paul Gilbert name is arguably the noted rock and metal guitarist’s best album since Burning Organ in 2002.

With no support Paul Gilbert, accompanied by Thomas Lang on drums and Pete Griffin on bass guitar, started the show at 8pm sharp but by 8.40pm the ex Mr. Big and Racer X six-string had still to utter as much as two words to the audience – mainly because the trio opened the set with a fairly intense forty minute instrumental medley that featured plenty of trademark Gilbert shredding.

Recognisable within the lengthy opening piece were the sounds of 'I Like Rock,' 'Cut, Cut, Cut' and 'Individually Twisted' but even the most devout PG aficionado would have struggled to recognise all the components of the monumental medley (to these ears however parts of 'Fuzz Universe,' 'Silence Followed by a Deafening Roar' and some Racer X song-shreds were included).
It was a bold opening move but it worked well, especially when taken as part of the whole and with what followed in the second part of the show.

Songs from I Can Destroy featured heavily in the hour and more that followed the medley (as did, thankfully, some lip service from Paul Gilbert), starting with the rocky but highly melodic 'One Woman Too Many,' featuring a couple of very sweet guitar solos.

Up next was the mid-tempo and quirky 'Everybody Use Your Goddamn Turn Signal' followed by the mellower, laid back with a groove 'Blues Just Saving My Life' (a lyrically amusing song where everybody from the wife, the children, the doctor, the bus driver and Jesus (among others) are trying to kill him… with the blues saving his life.

A keyboardless version of 'Enemies (In Jail),' the opening track from 2012’s Vibrato, picked up the pace a little before the superb title track from I Can Destroy took centre stage with its double bass drum work, driving bass and very catchy guitar riff.
By contrast 'Woman Stop,' also from the new album, featured some mellow slide guitar to accompany its bluesy and country (yet still punchy) feel.

The rocking 'Better Cords' from the acclaimed Alligator Farm (2000) led to the highly respected Thomas Lang’s drum solo (Lang, who has played with a number of notable pop and rock artists over the years including Glenn Hughes, John Wetton and Peter Gabriel, also appears on the Vibrato and I Can Destroy albums).
Following the skins bashing Paul Gilbert gave his vocal cords a rest and produced some serious shredding on the title track from Racer X album Technical Difficulties. 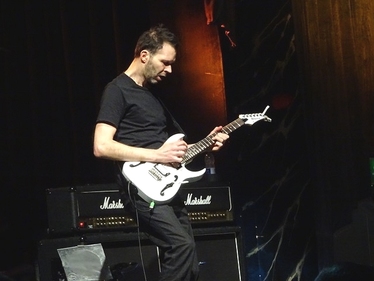 ​Two more I Can Destroy songs followed the Racer X number – 'I Am Not The One (Who Wants To Be With You),' which contains similarities to the Mr. Big tune 'Addicted To That Rush,' and the initially slow and bluesy 'Adventure and Trouble,' a number that picks up the pace towards the end with a longish solo from Paul Gilbert, building to breakneck speed.

The show closer went back to 2005's Space Ship One for the high energy and "shouty" 'SVT,' ending a set that was deserving of a far larger audience (The Assembly was half full on the night but those present were very much aware of the immense talents and musical qualities of Messrs Gilbert, Lang and Griffin).

As is typical for many venues these days there was a curfew in place; the auditorium no doubt needed for a late night disco or whatever it is that the students of Leamington Spa get up to on a Saturday night.

But with the abilities on display and a one hour fifty minute presentation, being in the company of Paul Gilbert and his band was a very pleasant way for those of an older or rock based disposition to spend the earlier part of a Saturday evening.