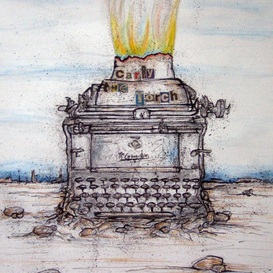 Although born in Motherwell, Scottish singer songwriter Paul McGranaghan spent his formative years in the North Ayrshire town of Largs (moving there when he was five years old) and sees himself as an Ayrshire musician.

McGranaghan spent ten years in the Largs-based band Blind Pew and is unarguably part of a burgeoning Ayrshire music scene (Biffy Clyro being the most well-known of the recent successes) that continues to produce quality signed and as yet unsigned bands and artists.

And while there was never any doubting the songwriting or performance talent of Paul McGranaghan – as his solo shows (sometimes accompanied by friend and fellow guitarist Paul Breen), occasional full-band performances and 2010 EP Six Chords and a Pack of Lies attest to – Carry the Torch is a whole new artistic level for the musician.

From the atmospheric and introductory rock ‘n’ honky tonk-esque grooves of the opener, ‘Sonny and Co,’ complete with slide guitar and a quiet but deliberate vocal, it’s clear this is going to be so much more than and a handful of pleasant, acoustic melodies.

‘Sonny and Co’ was inspired by Ralph “Sonny” Barger (author and famous Hells Angel Motorcycle Club leader) and builds to paint a musical picture of driving down American highways at full bore.
It delivers a powerful throwback 70’s rock and roll Americana groove while McGranaghan proudly declares “All I need is my brothers… and my machine!”

It’s a feisty, vibrant opening statement, setting up not just the musical tone of Carry the Torch but the recurring theme of the album.
Because while “Sonny” Barger is the star of the opening track, the special guest throughout the album is Hunter S Thompson, the famous but troubled American journalist and author who took his own life in 2005.

Paul McGranaghan is an aficionado of Thompson’s work and using themes or individuals from his books was inspired – it quite literally (and lyrically) gives the songs character(s).

“Sonny” Barger featured in Hells Angels: The Strange and Terrible Saga of the Outlaw Motorcycle Gangs, the 1967 book that made Hunter S Thompson internationally famous.
But it’s not just the factual but the fictional Thompson characters that feature in McGranaghan’s songs.
‘Chenault,’ a charming acoustic-based number and the perfect foil to follow the bombast of ‘Sonny and Co,’ is named after the featured female character of Thompson’s novel The Rum Diary.

The album’s title track is perhaps McGranaghan’s most simple-but-effective acoustic ballad to date but it's the up-tempo rock numbers such as the gritty ‘Half Mad in Love City’ and the punchy, melodically grooved ‘Brown Buffalo’ that grab, and demand, your attention.

That said, ‘With the Right Eyes’ (based around Hunter S Thompson’s most famous work Fear and Loathing in Las Vegas), a soft-rock waltz with a string-arranged merry-go-round melody that you’ll be humming all day, may well be the highlight of the entire album.

By contrast there’s the frantic slice of guitar-led rock and roll ‘Tricky Dicky,’ the derogatory nickname for infamous US President Richard Nixon and another notable referenced by Thompson (in his book Fear and Loathing on the Campaign Trail ’72).

The final trio of numbers each carry their own musical identity.

‘Lono’ (an ancient Hawaiian God) is a light in touch number that counters its melancholic lyric (“no silver lining for me”) with a pleasant mid-tempo pop refrain.
Its watery introduction and vibe reflect Hunter S Thompson’s experiences in Hawaii in 1980 and a later fishing trip (as detailed in his book The Curse of Lono).

‘Infections’ brings a little funk to proceedings with a quick-fire “hope for better times” chorus that wouldn’t have been out of place on a Rolling Stones album of the mid-70’s.

‘Gunshots in the Night Sky’ carries similar musical colours to ‘With the Right Eyes’ but with darker tones. Almost cinematic in scope, it’s the perfect closer to an interesting and enthralling album.

Great partnership that Paul McGranaghan’s musical and lyrical mind and Hunter S Thompson’s life and literary works have turned out to be, there is also a strong supporting cast on Carry the Torch.

The album was recorded and mixed at Honky Tonk Studios in Largs by Andrew McGregor and Stuart McArthur (who played bass on the album) and they have delivered a sonically solid product.

Other contributions deserving of mention include those from Paul Breen (guitars), Grant Kerr (drums) and the backing vocals of Rose McPhilemy and Francesca Luisa Kelly. The additional vocals add another layer to many of the tracks and are especially effective on songs such as ‘Sonny and Co.’ and ‘Chenault.’

Even with the known songwriting abilities of Paul McGranaghan, who has been writing since he was fifteen, the musical maturity and intelligence found within Carry the Torch is far beyond what I expected. It's a ridiculously accomplished debut.

And the listener doesn’t have to know Hunter S Thompson’s work to appreciate the songs – they have their own individuality and stand on their own creative merit.

But therein lies the problem.

This clearly isn’t off-the-shelf rock and roll or manufactured pop-pap as produced for the fashionable face-fits artists of the MTV generation.

This is an album full of character – and characters – with an Ayrshire singer songwriter’s modern slant on 70’s Americana rock, partnered by his own acoustic sensibilities and musical intelligence.

And that latter remark means although it will resonate with those who appreciate good, vibrant music it will also create Fear and Loathing in the Music Industry.

I can think of no higher compliment.


The following audio tracks are presented to accompany the above review and promote the work of the artist. No infringement of copyright is intended.