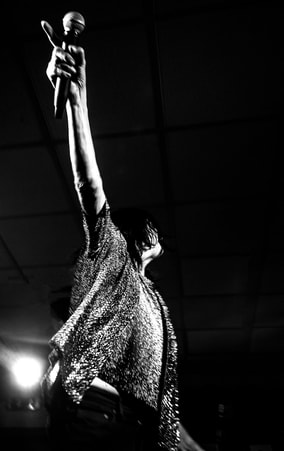 Even with the good going live room (everything from ceilidh and comedy to tribute and rock) that resides within the Custom House Hotel in Greenock, hosting the Pete Way Band, on a Sunday, the evening after they played a Glasgow city centre gig, is putting Pete Way between a Rock and roll set and a damned Hard Place to sell it.

Compounding the issue was the fact the Greenock gig was a late switch from a cancelled Aberdeen date; most Inverclyde area rock fans would, therefore, have attended the nearby Glasgow show.

But an audience there was, albeit an obviously smaller one than Glasgow, which is testament to the pulling power of Pete Way, his legacy and fan base (including one fan wearing an Aston Villa top, Pete Way’s other love; nice touch).

​Prior to the appearance of the Pete Way Band Ayrshire musician Jamie Angus delivered a highly entertaining and not a little quirky acoustic set of covers that were a mix of more rock orientated ('Boys Are Back in Town,' 'Crazy Little Thing Called Love') and his favoured repertoire of 80s pop and new wave (George Michael’s 'Faith' sharing set-list space with the Talking Heads 'Psycho Killer'… who’da thunk it). 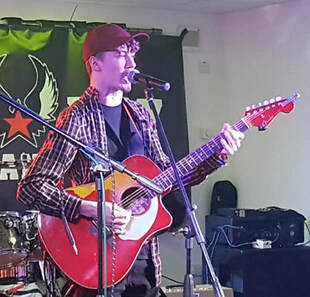 The vocally and musically rangy Jamie Angus
Opening with Rocky Horror’s 'Sweet Transvestite' and vocally out Tim Curry’ing Tim Curry, young Mr Angus is as rangy (from a baritone core to vocal lifts that damn near sail the High C’s, as heard on the outros of 'Video Killed the Radio Star' and his final top note on 'Take On Me') as he is quick with a quip, his best coming just before launching in to a Green Day number – "to my generation Green Day are classic rock… and I wasn’t even born when they started… think about that!"
Cheers Jamie, I’ll be in the corner with the hot chocolate and my slippers on.
​
There was, frankly, serious doubts over whether Pete Way could deliver after such a long lay-off and recent, serious health issues (prostate cancer in 2013 and subsequent recovery; heart attack in 2016).
Those doubts were reinforced by earlier warm up shows and performances that were tentative and full of vocal uncertainty (Way, who sung lead on his last two solo projects, Amphetamine and The Plot (the latter with Michael Schenker) has since dropped bass playing duties to become ​front man of his own band).

​But as witnessed on recent tour dates a tightening up on the road, coupled with better vocal discipline have led to much stronger performances (Pete Way will never be a great singer but he has an individualistic style that is part earthy, part punky and part Ian Hunter).
All of which was given voice (pun intended) across opening numbers 'You And Me' (the raw 'n' roll opener from The Plot) and the southern meets punk of 'Fooled Again,' from Amphetamine.

Nor does it hurt that Pete Way has a bloody good band around him.

Twin guitarists Laurence Archer and Tym Scopes are very different players (Archer is Flying V rock to Scopes’ blues ‘n’ slide) but they complement each other and the band perfectly.
Add in bassist and multi-instrumentalist Jason Poole and respected sticksman Clive Edwards (playing through the pain of a very badly sprained wrist on the night) and you have a band that can UFO it up ('Shoot Shoot,' 'Too Hot To Handle') and punk it out ('American Kid,' with its Mott the Hoople styled rock 'n' swagger, and the earthier and far edgier 'Crazy,' with Pete Way’s forthright declaration of "there ain’t no Alice here, this ain’t no wonderland!"). 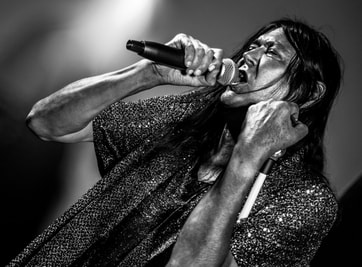 Mention of UFO leads to the observation, and clear decision by Pete Way, to make this about the new band and solo material as opposed to the easy out of resting on Legacy Band laurels (a set of UFO songs would probably be a bigger crowd puller, especially given Phil Mogg’s retirement, the sudden and sad passing of Paul Raymond and the band’s now uncertain future).
​
That there were as many songs from The Plot as there were UFO classics and a 3:1 ratio in favour of Pete Way solo material (the ballad 'Heartache' and the weighty, darker 'Narcotics' from the long delayed but forthcoming album Walking on the Edge also featured) tells you that, for as long as this lasts, Pete Way wants to make it about where he is now, not where he was then.

​Ending on a UFO brace of 'Only You Can Rock Me' and 'Doctor Doctor' (one of two songs where Pete Way briefly strapped on the low slung Thunderbird bass for song intros while Jason Poole switched instrumentation) was a no brainer, however.

It guaranteed a vociferous and well received finish to a gig the band could as easily have politely refused offer on, once the Aberdeen cancellation was confirmed.

But where there’s a will there’s a Way; one that’s happy to play and even happier that he still can play, given the aforementioned health issues and rock and roll excesses lived to the full, as admitted to, and described within, his recent autobiography Fast Ride Out of Here.

That should be applauded as loudly as any UFO classic.