Preacher’s performance at one of the most historic venues in not just Ayrshire but all of Scotland was a home-town fans, friends and family affair (although it was gratifying to note a number of fans had come from further afield to see the show).

The progressively-tinged melodic rock outfit from Ayrshire are still showcasing last year's debut album Signals, complete with accompanying video screen imagery, but the Gaiety audience got the bonus of new material and a very accomplished performance – this was the best I have seen and heard the band.

Herborg Hansen will be familiar to anyone who has followed Preacher of late – the singer was a featured backing vocalist for the band (both live and on Signals) prior to forming her own group Herbs & Spices.

The band's acoustic-based rock arrangements of two covers and two self-penned tunes worked well as a live promotion for the group and the appealing voice of Hansen; the set was made all the more impressive by the fact it was their very first show.
A cover of System of a Down’s 'Toxicity' opened the set while 'Cosmic Love' by Florence and The Machine finished it in fine style, but 'True Vales' and 'A Vision' were also strong offerings.

Pond Floyd could easily be labelled "yet another Pink Floyd tribute band" but the Glasgow band separate themselves from the pack by adding an audio edge to proceedings.
While other tribute acts recreate the ambience and soundscapes of Pink Floyd to the Nth degree, or at least as far as their abilities will allow, Pond Floyd are more accurately a rock band who play Pink Floyd covers. Not so much Pond Floyd as Rock Floyd.

The opening parts of 'Shine On You Crazy Diamond' (the almost mandatory opening sequence for any Floyd set) were pitched close to the originals but numbers such as 'In the Flesh?' and 'Another Brick in the Wall' were musically more aggressive, which suited and complimented the associated vocal passages delivered by Pond singer Rab Coyne.

In keeping with the Pink Floyd factor, there is a distinctly Floydian sound to a number of the songs on Signals, including the slow-burn opener 'Time,' but these are not extra-audio signals from The Dark Side of The Moon – Preacher’s confident debut also carries modern melodic rock grooves and has a sonic edge that places it in the present, not the past.
By way of example the band are not exactly hanging about on the rock and rhythmic 'Friend of My Dreams,' which incorporates middle-eastern musical cadences. 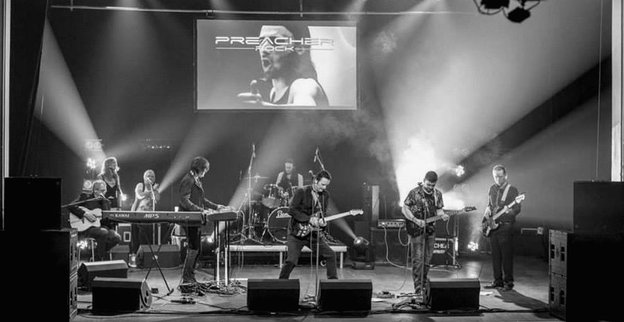 The aforementioned 'Time' was an atmospheric opener but its mood was upset somewhat by, ironically, a badly timed curtain call/ Preacher introduction that came while most of the audience were still returning to their seats after a shorter-than-anticipated break.

The only other hindrance to an otherwise excellent performance was a throat infection troubling Preacher front man Martin Murphy, but Murphy was ably supported by backing singers Angela Bell and Kerry McWhinnie, who vocal-pitched a perfect game.

The Gaiety gig was also a chance for the audience and fans to acquaint themselves with latest Preacher on the block, bassist Gordon Munro.
While the new recruit took a back seat (or more accurately a few steps back from the front of the stage) in terms of physical presence, his musical presence was certainly felt.

Greg Murphy gets more fluid and confident every time I hear or see the self taught guitarist play – at only 21 Murphy Jr. already has more natural touch and quality of tone in his playing than many guitarists twice his age.
It’s just a pity that the finale of the slow-building and outstanding ‘Signals’ isn’t extended by a good few bars when performed live to let Greg Murphy really flex his fingers, as the similarly structured 'Würm' (by the Starship Troopers of progressive rock YES) does for Steve Howe.

Adding an extra layer to the sound was acoustic guitarist Ron Rodger and a nice touch on the night was the dedication of 'Jupiter and Mars' to guitarist Merv Atkinson, who sadly died in January.
Atkinson was part of Preacher’s album launch show at the 02 ABC in Glasgow in 2013.

The Signals set was followed by three new songs that will almost certainly appear on Preacher’s next album, Aftermath.
'Welcome to the Fray' had an edge that both appealed and extended the Signals sound, while closing number 'Always Waiting' built from slow beginnings to a fast-paced, full band finish.

Both were strong statements but a highlight of the entire set was 'Another Day,' a contemplative John Lennon-esque composition from Arnie Burgoyne and Martin Murphy.
It was a bit of a departure for the band but one that confirms Aftermath will not be Signals Part 2, something many a modern melodic rock or progressive-based band should take note of.

Preacher’s debut album builds from quiet introductory beginnings to a powerful and assured musicality that is hard to ignore – I can only hope the same will be said of the band in the years to come.