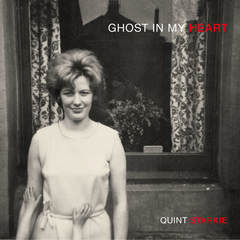 Singer songwriter multi-instrumentalist Quint Starkie may not be a household name, but the Stockholm based British musician is certainly as at home (pun intended) being a House Artist as he is on venue stages with a full band or in lower-key, solo acoustic settings.

That’s not the most remarkable set of circumstances; a number of artists are finding musical and, indeed, life affirming satisfaction in House Artist performances as well as the bigger stage – Dan Reed of funk rockin’ Network fame and ex It Bites front man Francis Dunnery, to name but two (more on the latter name later).

But what is remarkable is that it‘s taken Quint Starkie, a musician with a beautifully melodic and lyrical sense of purpose (and a songwriter who had a publishing deal with EMI through the first decade of the 21st century) this long to record and release a debut album.
The good news however is it's been more than worth the wait – and at 14 tracks and 74 minutes long you can’t complain about being short-changed.

Ghost In My Heart is a personal reminisce that is not just a trip down memory lane but a poignant, reflective yet upbeat walk through all the avenues and streets of Quint Starkie’s upbringing in the North of England through the 1970s – at the lyrical core, and musical heart of the matter, are life & love, births & death, relationships, family and parental ties.

Reinforcing the parental bond is the fact that the CD album was originally released in November 2016, on the ten year anniversary of the passing of Quint Starkie’s mother (exactly one year later Ghost In My Heart received a 2017 re-release in all digital formats, which will hopefully help garner it the attention, and critical acclaim, it so thoroughly deserves).

With opening track, the formative autobiographical years of 'Where I Belong,' Quint Starkie begins his story in melodically rich, mid-tempo tones; the song’s musical warmth may initially seem at odds with the colder climes of the lyrical past ("Life was hard in a cotton town, cobbled streets and hand-me-downs…") but the song emphasises the importance of family, home and associated happiness within.

Lyrical storytelling aside, 'Where I Belong' is simply a beautifully crafted piece of melodic pop and harmony (in all its meanings) that carries the subtlest hint of country, a musical influence shaded through many of the song arrangements (courtesy of guest player Göran Ericsson's pedal and lap steel contributions).

The light and airy soul-pop of 'Sarah' (with delightful little six-string remarks that flit in and out of the spaces) is another reflective reminisce with an uncanny ability to have you singing along to the chorus even before you are completely familiar with it, or interjecting your own "Sarah!" ad-libs.
It’s also one of a number of songs on the album you just know Francis Dunnery will be setting up a Public Inquiry as to how and why he didn’t come up with it first (similarly the ever so poignant, acoustically led title track and the up-tempo, rhythmic beach-pop of 'Malibu').

The mention of, and song-style comparisons to, Francis Dunnery, is unsurprising given how simpatico they are in more than just their music (Dunnery is also a northern boy), but a core strength of both is unarguably their knack for meshing catchy harmonies and sublime melodies with real-life or thoughtful lyricism.

Nor, therefore, is it any surprise to find that Dunnery is Executive Producer of Ghost In My Heart or that his are the beautifully complementary lead guitar lines that feature on 'Brightness in My Soul,' a seven minute country-tinged, gospel affected ballad written to the memory of Quint Starkie’s mother.
As personal as the song obviously is to the songwriter/ singer, it’s a touching track that will connect with anyone who covets the memories of those important, or closest, to them.

Other Ghost In My Heart highlights include the foot-tapping lightness of 'Just For You' (featuring harmony and backing vocals from Dorie Jackson, who graces every song with her accompaniments), the more delicate
'A Little Part Of You' and the soul-pop sway of 'You Had Your Chance.'

The album closes out, rather appropriately, with 'This is Goodbye.'
The spacey and drifting eight-an-a-half minute ballad features a short but sweet sax solo from Johan Håkansson that sits between two sets of wonderful solo exchanges from Quint Starkie and guest guitarist Toshi Yanagi – the results are a number that doesn’t so much fade out, as float away.

Ghost In My Heart is a reflective and personally wrapped album that will appeal and connect with anyone who appreciates well crafted melodies as much as they cherish warm and happy memories.

Quint Starkie’s work of heart also makes it hard to argue against those very things being two of the most important aspects of life.