Blues rocked in, souled out
The Rainbreakers – Face to Face 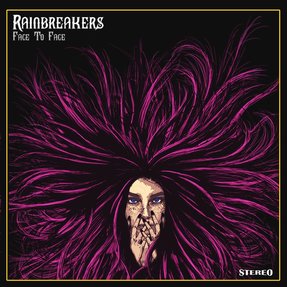 The Rainbreakers are a band that take late 60s and early 70s British rock as their starting point but fully contemporise it with a healthy injection of soul and a liberal sprinkling of blues rock, R&B, pop, garage band riffs and the psychedlic.

But it was the 2015 four-track EP Blood Not Brass (led by the feisty 'Ain’t Nothing Goin' On') and 2017’s five-track pack Rise Up (the first release to feature Charlie Richards) that saw the band take soul rock shape.
​
And now, Face To Face, the Rainbreakers full-length debut album – and it doesn’t disappoint.

Opening number 'Heavy Soul' is well named; not only does it swagger with the sort of soulful depth that has become part of the Rainbreakers signature sound, its big riff driven choruses dovetail perfectly with the quieter, spacey verses that allow Ben Edward’s personal lyrics (of good intentions being stifled by the not-talked-about-enough topic of depression and mental health) to make an impact.
"Heavy soul, sinking with a heart of gold!" declares Edwards, with a particularly impassioned final line.

As strong an opening as 'Heavy Soul' is, it’s only one facet of the Rainbreakers soulfully driven sound.
'Get Me Where She Wants,' 'Need Your Love' and the danceable 'Lay It On Me' are funky little numbers that ooze melody and choppy guitar punch in equal measure while 'Lost With You' is unashamedly a soul-pop blues love song that features delightfully understated guitar licks from Charlie Richards.
It's also a track that should be banging on the door of BBC Radio 2 demanding mainstream airplay rotation.

'Lost With You' is also the perfect example of the Rainbreakers refusal to play it safe.
It would be easy to deliver an album full of weightier, pacier numbers with a blistering solo on each but Face To Face features a mix of tempos and a meshing of the band's soul, blues, rock, pop and R&B influences.
(And more power to the Rainbreakers and other artists such as Ben Poole for staying true to their calling and expressing themselves honestly through many different shades of blues).

Other Face To Face highlights include the striking title track, a full bodied yet spacious soul-rock ballad (with a lyric tackling the angst of jealousy) and 'Take It Or Leave It,' an edgier soul-rock statement about knowing when to stand your ground and when to walk away.

Three songs that featured on the EPs have been re-recorded for the album.
'Ain’t Nothing Goin’ On' is even more vibrant, courtesy of some red hot guitar sparks from Charlie Richards and a great sound and mix from noted producer Tom Gittens; complete slow soul-blues contrast is provided by another Blood Not Brass track, 'On My Knees.'
The ballad 'Waiting On You,' which closes out the album, was a highlight of Rise Up but the band felt it was unfinished; on Face To Face it sports a waiting-no-longer second, or completing, half, entitled 'Moving On.'

Blood Not Brass showcased a band with plenty of potential, Rise Up was a psychedelic and soulful shift beyond but Face To Face sees the Rainbreakers truly hitting their stride.
Peter Adams and Sam Edwards lay down not the rhythm but the groove, Ben Edwards vocally hits all the soul-blues sweet spots and Charlie Richards delivers tasty, space-filling guitar lines from clean, blues crying notes to the more psychedelically effected.

If you like your blues rock to have light and shade and be fuelled by so much soul it’s damn near dripping out the speakers, get Face To Face with the Rainbreakers on their debut album.