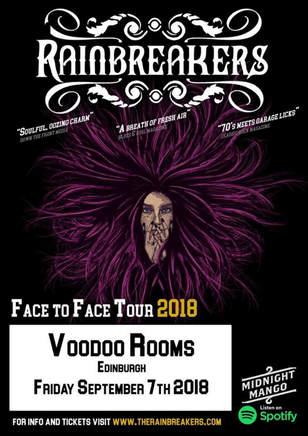 Rainbreakers, the four-piece blues rock band from Shrewsbury, brought their first headline tour of the UK north of the border to the Voodoo Rooms in Edinburgh.
And they didn’t disappoint.

This was also the band’s first visit to Scotland (with a Glasgow gig the following night) but, given the reception they received from a small and intimate crowd, they will certainly be back.

The Rainbreakers have just released their full-length debut album, Face to Face, a 10-track mix of blues, soul, rock and pop that guitarist and led vocalist Ben Edwards describes as their own individual box of sound.
It’s also an album that merited Feature Review status here on FabricationsHQ.
​
From the moment they came on stage the Rainbreakers had the audience transfixed, including the evening’s two support bands, local lads Waverley, and Livingston based The Phantoms, both of whom respectfully stayed to watch the Rainbreakers set from the front (both support bands also served up excellent sets).
​
Rainbreakers launched into their hour and a half show with the feisty and vibrant 'Ain’t Nothing Goin’ On' followed by the funkier 'Get Me Where She Wants;' both were lifted from Face To Face.

Next up were earlier but no less impressive numbers 'Blood Not Brass' and 'On My Own,' from 2015 EP Blood Not Brass and 2017’s Rise Up EP, respectively.
Both songs had a real rhythm and blues feel with a touch of soul, expertly delivered by a tight-knit performance from the quartet (alongside Ben Edwards are Charlie Richards on lead guitar, Peter "Pedro" Adams on bass and Sam Edwards on drums).

The audience were then treated to the remaining tracks on the Face to Face album, including the album’s excellent soul-rock ballad title track, soul-pop blues tune 'Lost With You,' the edgy blues rocker 'Take It or Leave It,' the funky 'Need Your Love' and the highly danceable 'Lay It On Me.'

Slower numbers, the soul-blues 'On My Knees' and ballad 'Waiting On You' (reworked and extended from its Rise Up EP origins for Face to Face), were further highlights.

The Rainbreakers and Face to Face are an eclectic mix of sounds very much influenced by Gary Clark Jnr.
It was therefore unsurprising that the band also delivered a truly outstanding cover of Gary Clark Jnr’s 'When My Train Pulls In.'
One of the best versions I’ve heard of this song (Gary Clark Jnr. is one of this blues rock fan and reviewer's favourite artists), it featured a simply sublime guitar solo from Charlie Richards and classy vocals from Ben Edwards.

The band ended with the lead-off single from Face to Face, 'Heavy Soul.'
A truly heartfelt track with soulful depth, the song’s lyric focuses on Ben Edwards’ personal experiences and difficulties with the not talked about enough issues of depression and mental health.

With the crowd on their feet applauding for an encore the band closed out the set with another Gary Clark Jnr. track, 'Bright Lights,' which went down an absolute treat.

The Rainbreakers are a class act with a truly professional sound. They also have such a unique style and mix of influences that I suspect, and hope, they will continue to garner a larger following with each tour.

I look forward to their return to Scotland next year when I fully expect to see and hear them play to bigger audiences.