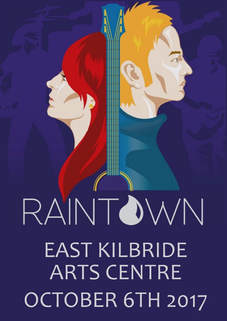 I’m certainly no whisky expert nor sampler of the many wonderful waters of life but, much like the music side of things, I know what I like and why I like it – and that’s a smooth and warm Single Malt thanks (Balvenie, now that you’re asking; slàinte!).

But the right blend, or blends, can also hit the spot.

Modern country pop-rock band Raintown are all about the blend of not just the smooth and warm voices of husband and wife singer-songwriter team Paul Bain and Claire McArthur Bain but the blend of the individual band members – Scott MacPherson (bass), John Alexander (drums), John Mather (lead guitar), Stevie Lawrence (acoustic guitar/bouzouki) – and top-notch songs that range from romantic storytelling to melodic pop and roll with splashes of Celtic rock and bright lead guitar tones, where only a hoedown chorus or a well-placed country picking guitar lick gives their Nashville tinged influences away.

All of which were in evidence at the East Kilbride Arts Centre, a quickly sold out show for the Glasgow based band making a name for themselves with multiple awards, well received headline & festival shows and noted audience widening support slots (Runrig, Wet Wet Wet, Deacon Blue to name but three).

Introduced by their own video screen montage, the band seamlessly kicked in to 'If This Was a Love Song,' a number with so much harmony, melody and county pop appeal that if it had been written and performed by a Nashville act it would never be off US country and mainstream pop radio.

The up-tempo opening was followed by the equally Nashville but more lyrically poignant 'Nineteen Again,' one of many songs on the night showcasing what a fine voiced and sympathetic vocalist Claire McArthur Bain is, giving the song and the lyric what it needs, not what her voice is so obviously capable of delivering.
(Unlike the Mariah Careys of the world, Mrs Bain leaves any vocal ego she may have in the Dressing Room).

The acoustically clothed 'Forever Isn’t Long Enough' is another Claire McArthur Bain highlight.
The strikingly beautiful number was given additional emotive texture on the night from the fiddle of Fiona Cuthill, who guested with the band on a handful of numbers (the renowned fiddle player has previously worked and performed with Raintown; she also collaborates in various projects with Stevie Lawrence).

Raintown's second album Writing on the Wall featured heavily in the set (unsurprising given it’s the band’s current release and choc-full of quality songs), including the punchy country pop of 'Right Here With Me' and the modern Americana meets thigh-slapping choruses of the title track, complete with new vocal intro.

Strong that every Writing on the Wall number performed was, the pick of the bunch had to be the poignant 'Missing You,' a rhythmic and pulsating number themed around the emotional scenario of what if that last voice message you received from a loved one turned out to be just that.

While Writing on the Wall songs dominated, previous album Hope in Troubled Times was well represented. Five songs from the debut made an appearance, including 'Light the Fuse Up' (which rocks that little bit more live), the don’t look back optimism of the title track, jaunty country-fiddle number 'Love's Got a Hold On You' (perfectly twinned in medley with the Johnny Cash - June Carter arrangement of 'Jackson') and the melodic country pop of 'Just One Kiss.'
The latter closed out the show as the final encore number, the main set having ended on the raucous country roll of 'Shut the Front Door,' Paul Bain’s retort to the Internet trolls and commercial country-pop critics who try to Rain on the Townies parade (and best of luck with that).

Outside of the album tracks the woah-ohs of new song 'Run With the Night' would make for a great melodic pop-rock single and third album taster; captivating vocal contrast was provided by the A capella cover of Little Big Town's 'Girl Crush,' Scott MacPherson adding vocal depth to what was an excellent harmony trio performance (the vocal rhythm was so focused that the accompanying finger-snapping outro was superfluous and, truth be told, detracting). 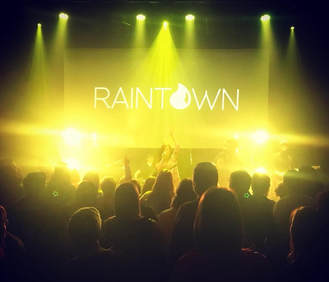 ​If Raintown were Grand Ole Opry you wouldn’t see me for dust and an antidote of Pat Metheny’s progressive jazz in my earphones (which I duly acknowledge would have most country purists running for the barn dance door before said door was even open).

But Raintown are a country loving band who use that genre as their influence or starting point; Nashville and classic country pop are simply part of that full bodied, modern and melodic Raintown sound.

Now excuse me while I celebrate an outstanding concert, by a Scottish band who shine as brightly as the lights that closed out the show, with a wee dram of the good stuff.

I might even make it a blend; it seems only fitting.