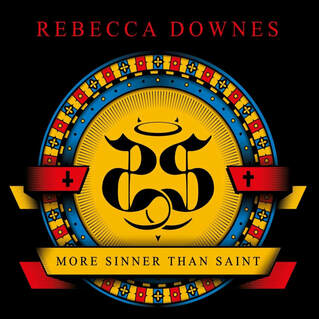 Let’s get straight to the point – Rebecca Downes is one of the best (and arguably the best) female vocalists in British blues rock land.

But while a handful of awards help underline that claim (she also knows vocality like very few others) the powerfully voiced singer had never made it beyond the blues rock club level her talents, and songwriting partnership with guitarist Steve Birkett, so obviously merit.

However third studio album More Sinner Than Saint, a project that benefited from song and arrangement advisory from noted producer Chris Kimsey in its early development, not only showcases just how good Rebecca Downes is, the step up in songwriting should also lead to a notable step up in commercial fortunes.

Opener 'Take Me Higher' isn’t too far removed from the rockier Rebecca Downes of previous albums but it underlines and reinforces this is a musically bigger and lyrically bolder Rebecca Downes, with a darker edge that manifests itself through weightier musicality and some very honest and personal lyricism.
The song, which develops into a mighty fine slab of rocking blues with a punchy chorus (and a full blooded but controlled vocal from Miss Downes – this is a singer who doesn’t deliver what she can but what the song needs) is quite the opening remark, but it’s just the opening gambit.

The atmospheric 'Chains Fall Down,' a brooding five-and-a-half-minute number with a pulsating bass line from Dan Cark, is the introduction to that darker edge and personal lyricism; this is Rebecca Downes unshackling herself musically, lyrically and emotionally ("are you watching now, as the chains fall down at my feet…").

Even by title alone 'Chains Fall Down' tells a story – similarly 'Hurts,' a heavyweight blues rockin’ number with Rebecca Downes on full vocal tap ("hearing your name makes it worse… now I feel like I’m cursed!") and power ballad 'Screaming Your Name,' a song you could be forgiven for thinking was written by, or for, Adele. (Indeed if the Queen of Musical Catharsis recorded this song she’d have another monster of a hit on her hands).

The title track is another Adele stamped offering and another winner.
A saintly organ refrain soon gives way to a bigger and more sinful soundscape; it’s a song that’s as much rock gospel blues as it is power ballad.
It’s also one of the few numbers where Steve Birkett solos out, and even then it’s in relatively short, understated but highly effective fashion (Steve Birkett with guitar, like Rebecca Downes with a microphone, is all about producing what best serves a song, not what best serves the ego; something many a bigger named six-stringer or singer could learn from).

'If I Go to Sleep' is a muscly, rock radio song that separates itself from the "whoa-oh!" pack by incorporating both light and shade before guest guitarist Alan Nimmo channels his inner Kossoff toward songs end.

'Stand On My Feet' might be the most important song Rebecca Downes has ever laid down.
The fulcrum point of the album, the spaciously arranged and atmospheric six-and-half-minute slow burner is, lyrically, and to some degree vocally, Downes at her most vulnerable yet most courageous.
"It won’t be long... before I stand on my feet!" defiantly declares Rebecca Downes on a song that is Rebecca Downes.

By contrast, and as if to purposely lift the mood to better days ahead, 'Big Sky' is upbeat, optimistic smile on your face melodic rock n bluesy roll of the highest order.

Closing brace 'In Reverse' (the only "big blues song" on the album but styled in that inimitable Downes -Birkett fashion) and slow-build ballad 'With Me' (another that relies on atmosphere and spaciousness to make its mark, bolstered by a vocal delivery that is beautifully balanced between controlled power and emotive phrasing) wrap up a 12 song, sixty-minute rock and darker balladeering ride in the company of Rebecca Downes and her band of musical brothers Steve Birkett, Rick Benton, Lloyd Daker and Dan Clark.

More Sinner Than Saint isn’t just an outstanding album from songwriting and arrangement to performance and sound (and kudos to the separate but complementary mixing jobs done by Bill Drescher and Thunder’s Chris Childs), it’s also the album Rebecca Downes absolutely needed to make.

It now only needs the saintly number of awards, acclaim and wider and larger audience it deserves; anything less would be a sin that hits Rebecca Downes where it Hurts...