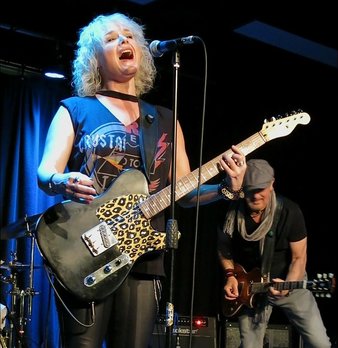 It's been a long time since the patron of this site and I went on a road trip to take in some live music.
So long ago, in fact, that Ross's beloved Spurs had yet to win the Premier League. Oh, hang on...

But I digress.
Our destination was Carlisle, where another Blues Revue was taking place at the Old Fire Station, a fairly new venue (a former fire station repurposed as a civic arts centre) that neither Ross nor I have previously visited.

After a one-sided debate with Ross's sat-nav (I don't suppose it's ever been called a spawny-eyed, parrot-faced wassock before), we find ourselves parked near to the venue with some time to spare.
Although we're close to the city centre, it's eerily quiet for a Saturday night, especially given that it's the first weekend after pay day.

​We wander off in search of some nosh and find a charming looking place where the waiter seats us facing the wall like a pair of dunces (I'm still wondering how he knew us) then cheerfully ignores us. Ho hum.

After finding somewhere willing to serve us, we womble down to the Old Fire Station just in time to miss the first 15 minutes of the first band's set (I'm pointing no fingers here, but it was Ross's fault).
That said, this faux pas does at least enable us to experience the efficiency of the Old Fire Station's soundproofing.

First to take the stage is Cumbrian three-piece R&B outfit, MT Arms, who deliver polished covers of blues-rock classics, with Colin Nichol's satisfyingly meaty guitar work overlaying the taut rhythms of bassist Mick Dale and drummer Mike Ellis.
A technical hitch with an effects pedal rears its head during their closing track, a spirited rendition of Jimi Hendrix's 'Voodoo Child,' but they ad-lib their way out of trouble admirably.

A good start to the evening, then, and a band well worth checking out if they're playing in your area.

Preston-based bluesmen The Stumble are next up on stage.
It takes a couple of seconds to register that there's six of them, including (joy of joys) a sax player, and only a further few seconds to realise that they're good. Damn good, in fact.

They joyously storm through a set that ranges from the high octane blues-rock of 'Be My Slave' to the foot-stomping boogie of 'New Orleans' via the powerful ballad 'My Life' with nary a (groan) stumble.

If you like your blues served red-hot with a tasty side order of pizazz then The Stumble is the band for you. Check them out; you'll feel all the better for it.

The walls are still reverberating when Rebecca Downes and her merry crew take to the stage.
I've seen the redoubtable Ms. Downes and co. before, so I set my expectation meter to 'High.'

As she launches into a twelve-song set that features eight tracks from her excellent 2016 album, Believe, it's immediately obvious that Rebecca has done a Nigel Tufnel and turned her voice up to eleven.
And what a voice it is – powerful (how does such a small frame generate such energy), soulful, clear.

They do say, of course, that behind every good woman is a great band, and that's certainly true in Rebecca's case. Co-songwriter Steve Birkett is a guitarist of the elegant and tasteful genus but, as he shows on 'Sailing On a Pool of Tears' and 'Believe,' he's more than capable of turning up the wick and cutting loose when required.
His partner in melody, keyboard player Rick Benton, adroitly contributes wonderfully fluid runs, fills and layers, moving seamlessly from blues to funk to jazz and back again.

Bass player Dan Clark is cool, calm and measured, the perfect visual counterpoint to drummer Lloyd Daker, who enthusiastically immerses himself in each song.
Together they're beyond reproach – you'll travel far before you find a tighter rhythm section.

Like The Stumble, Rebecca Downes and her band are more than musicians; they're alchemists at heart, bringing a quiver full of songs that are already strong – the smooth blues-funk of 'Night Train', the Ragovoy and Berns-penned classic 'Piece Of My Heart,' the anthemic, southern-inflected blues-rock of 'Believe' – to life in full 3D and glorious technicolour.

Do catch Rebecca Downes live. Chances are your expectations will, like mine, be exceeded.