Robert Jon & The Wreck - Last Light on the Highway 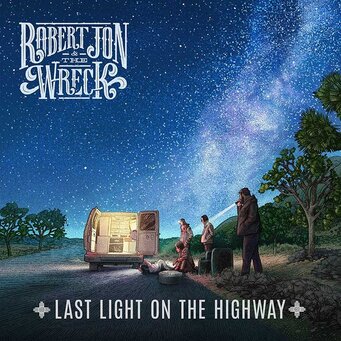 Orange County outfit Robert Jon & The Wreck are, it's fair to say, none too shabby when it comes to delivering the southern rock and soul goods.

Impressive 2011 debut Fire Started was a wonderful mix of contemporary (shades of Kings of Leon) and 70s southern sounds while the outstanding and muscly 2012 EP Rhythm of the Road and equally notable EP The Red Bull Sessions from the following year were later combined as Wreckage Volume 1.

Add in a live release and four further studio albums including a soul vibe’d self-titled offering and the bluesier rock and roll of 2019’s Take Me Higher (featuring Allman-esque instrumental-jam numbers 'Witchcraft' and 'Cannonball' respectively) and you have a stand-out Southern California band who have delivered yet again with Last Light on the Highway.

Firstly, they have delivered a collection of stellar, southern styled songs that are also some of their most soulful to date.
The eleven numbers are stylistically influenced by 70s southern rock and country (some more than others) but enthused with the band’s own brand of rock and roll and lighter, more soulful moments.
The results are a distinct, could only be Robert Jon & The Wreck sound.

Secondly, there’s a musical and songwriting maturity that is paramount to the songs’ strengths – seven of the numbers are relationship songs, whether that be in in terms of love (or love lost), romance or friendships.

Opening number 'Oh Miss Carolina' is a big sounding, slow southern soul rock number with a soupçon of gospel on the equally big backing vocals.
It would sit beautifully as either a deeper cut or album closing finale, but its placement at the top of the album is both highly impacting and significant – the band has so many other Last Light… gems to offer there’s no worry of any diminishment of quality; just variation on the soulful rock styles.

The following trio of songs prove that very point.
The soul-blues and horns of 'Work it Out' is a 60s tinged, saxophone soloing, female backing vocals and finger clicking winner (with a great vocal from Robert Jon Burrison) while 'Can’t Stand It' is an infectious little rhythm and bluesy number (with nice little guitar harmonies) that lyrically decries being left in the lurch by a once significant other.
'Tired of Drinking Alone' could be the sequel to the latter but the southern comforting blues ballad with tasty slide from Henry James has a bigger message – that of having a glass and a chat with someone you love.
We can all drink to that.

The rest of the album follows those more musically thoughtful and lyrically important themes without ever repeating the musical formula – 'Do You Remember' is a soulfully expressed feel-good number of carefree, youthful days while 'This Time Around' is a melodically framed promise to be a better man.

Anyone thinking the band have parked their big riffs and rocker credentials for this album need only hook in to the positively swaggering 'Don’t Let Me Go' (a song that the UK’s southern influenced Bad Touch would love to have in their repertoire).
The 70s sounding 'One Last Time,' which builds slowly from its piano and organ framework to deliver on a weighty, guitar crying finale, is the band stretching like never before.

Southern blues waltz ballad 'Gold' would have been a strong closing remark but the final two tracks, 'Last Light on the Highway' Parts 1 & 2, combine to deliver what is unquestionably the band’s most musically adventurous number to date.

Opening with a softer Robert Jon Burrison vocal over delicate acoustic guitar, Part 1 segues to a six minute section best described as a cinematic or musically widescreen experience of rock rise and ever shifting, string backed fall.
Featuring great piano and organ work from Steve Maggiora, Robert Jon Burrison’s impassioned lyric speaks of the life, dreams and realities of a band constantly on the road ("the house that I had was never a home; but the lightning and the thunder is where I belong… driving through the last light on the highway").

Last Light on the Highway will be released on Friday 8th May.
Pre-order now from  www.robertjonandthewreck.com