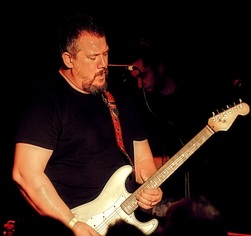 There would have been a fair few blues rock fans disappointed to note when they got their tickets for Robin Trower’s Glasgow O2 ABC gig it was for the ABC2 Club Room and not the Main Hall above (especially in light of Trower’s close to sold out show last time around in Glasgow at the sadly now-closed The Arches, a venue four times larger in capacity than the ABC2).

So while the bad news for the blues was those pesky little Indie rockers the Kaiser Chiefs had bagged the bigger stage for the same night, the good news was Robin Trower puts on the same crowd pleasing, passion-for-playing performance each and every time, whether that be in front of a festival crowd, a thousand-plus audience or a club of 350 blues souls.

With a strict and not unusual for the venue off-by-10pm curfew in place, Stevie Nimmo and his musical compadres Mat Beable (bass, backing vocals) and Craig Bacon (drums) power trio’d their way through a five song, thirty minute Special Guest set that was geared to promote Nimmo’s current solo album Sky Won’t Fall.

However a truncated set still showcased the varying shades of blues employed by Stevie Nimmo; opener 'Roll the Dice Again' (introduced cheekily as "a song called Ruby, no, sorry, that’s upstairs") was all gritty guitar tone and rhythmic swagger while 'Lovin’ Might Do Us Good' was a contrasting, funkin’ great way to end a short but scintillating set that was further enhanced by the slow blues number 'Running On Back To You' (featuring two tasty solos from Nimmo) and a highly infectious version of Storyville’s 'Good Day For the Blues.'

The latter features on Stevie Nimmo’s first solo album, the criminally under-promoted Wynds of Life, but six years on the delightful acoustic based and Americana influenced album is starting to see some deserved movement on the back of Sky Won’t Fall, regular Stevie Nimmo Trio outings and the well-received Robin Trower support slot.

There are a number of notable and truly outstanding six-stringers in the world of rock, prog, blues and instrumental fusion with a sound so distinct you can identify them from just one solo or melodic phrase.

Robin Trower is unquestionably one such guitar great but while the earthy and beautifully melodic "Trower tone" is due in no small part to his custom-became-signature Fender Stratocaster and distortion driven pedal power, it’s also part of his very fabric – that sound doesn’t just come from Trower's fingers, guitar, pedals and amps; it comes from his blues infused soul. 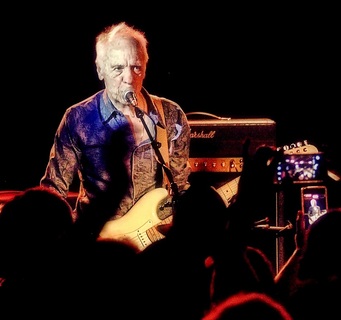 A warm and appreciative roar greeted Robin Trower as the familiar riff and rhythmic pulse of 'Too Rolling Stoned' kicked into gear, a song that allowed Trower, Richard Watts, (bass, lead vocals) and Christopher Taggart (drums) to hit the ground running before slowing for the bluesy finale where Trower’s notes floated free and unfettered across the hot air of the packed club room.

The following number, the slower groove driven 'See My Life' (featuring Robin Trower on vocals) was a more recent track (from 2013’s Roots and Branches); while the set unsurprisingly featured Trower’s finest, 70s era fusion-blues moments, it was peppered with later era material including the fusion blues rockers 'Not Inside - Outside' and 'The Turning' (from 2010’s The Playful Heart) and a brace from Trower’s current (and finest offering of the 21st century) release Where You Are Going To – the title track and the emotive blues number 'I’m Holding On To You' (written in memory of Robin Trower’s late wife Andrea).

The newer material was well received and sat comfortably with the older, classic material (but then it should; Robin Trower is currently enjoying one the most prolific and solid songwriting phases of his career) but there is no doubt the majority of the crowd came to hear, appreciate and get lost in the Long Misty Days (ironically one of the few classic era albums not represented) of decades past.

The back to back brace of 'Day of the Eagle' and 'Bridge of Sighs' (the latter featuring a Richard Watts vocal that, while too low in the mix on the night, perfectly complemented Trower’s spacey, six-string remarks) would have been the highlight of the night if not for the mandatory but masterclass delivery of 'Daydream,' Robin Trower’s melodic, slow-burn tour-de-force.
As Trower’s guitar notes sprayed across the beautifully crafted number we were all, once more "spellbound" within the sound of the fusion blues uber-classic.

A rollicking rendition of 'A Little Bit of Sympathy' closed out the main set before 'Rise Up Like the Sun' (from mid 90s release 20th Century Blues) and an atmospheric 'For Earth Below' delivered the one-two encore punch.

Robin Trower, at seventy-one years young, is the undisputed Godfather of Tone.

And, based on latest album Where You Are Going To, Robin Trower is still playing – and feeling – the blues as well as anyone.