Life in the old rock dog yet
Rod Stewart - Time 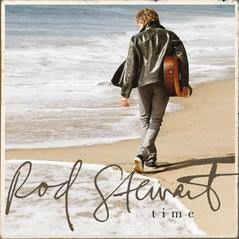 What a difference six months makes. And a two decade dry spell.

At the end of October 2012 Rod Stewart released Merry Christmas, Baby, a predictable selection of seasonal standards that followed in the footsteps of the singer’s Great American Songbook albums.

With Stewart’s stock soaring on the back of the Songbook releases (five at last count), Merry Christmas, Baby sleigh rode in to town on the top hat and coat tails of those uber successes to become another hit.

But here at FabricationsHQ Merry Christmas, Baby had the dubious distinction of being reviewed as one of the worst albums of 2012.

Uninspiring arrangements and vocally bland, it was a turkey for any season, not just Christmas.

But six months later Rod Stewart has shaken off the tinsel and the crooner/ pop standards to produce his first album of original, all-new material (only one cover resides within the eleven tracks) in more than twenty years.

Stewart’s return to song writing after such a lengthy dry spell was inspired by Rod: The Autobiography.
Writing his life story triggered musical and lyrical ideas that led to Time, one of the strongest albums of his entire career and his best since Atlantic Crossing in 1975.

The opening brace of numbers grabs the listener’s attention, showcasing Rod Stewart at his power-pop best, before the album diversifies to feature rock and roll, ballad and folk-based material presented in classic Rod Stewart style.

’She Makes Me Happy’ is fun-filled, feel good pop-rock, reminiscent of Stewart’s best early 80s material but with the incorporation of acoustic instrumentation and a folk-inspired core that hearkens back to the singers musical roots.

‘Can’t Stop Me Now’ is one of the many auto-biographical, musical reminisces on the album.
It’s another great slice of melodic pop-rock and roll, telling the tale of Stewart’s positivity as he starts to make his way up he ladder, declaring "They can't stop me now, the world is waiting, it's my turn to stand out in the crowd."

Turns out he was right. Love, like, loathe or ignore the raspy voiced rocker, no-one can deny his status as one of the greatest pop and rock artists of all-time.

The third track on the album, ‘It’s Over,’ became the lead-off single in Europe and is a fine example of Rod Stewart in balladeering mode.
’It’s Over’ recalls the broken heart atmosphere of a song such as ‘I Don’t Want To Talk About It,’ but the orchestrated ballad is all the more poignant because of its stark and honest lyric of marriage and divorce.
Although not disclosed, the song is almost certainly about Stewart’s first marriage (to Alana Hamilton).

The acoustic guitar and strings of ‘Brighton Beach’ provide delicate musical accompaniment to the story of first love and the memories of those days before ‘Beautiful Morning’ offers up another slice of feel-good pop rock and roll.

There’s also a little musical nostalgia for those who prefer early Rod Stewart to the later pop, covers and crooning model.
The mid-tempo acoustic folk ‘n’ fiddle of ‘Live the Life’ and ‘Make Love to Me Tonight’ could have sat comfortably on any of Stewart’s early 70s albums, while the sassy rock and roll of ‘Finest Woman’ would be a perfect fit for any Faces album of that same era.

The title track on the other hand is a slow-paced, bluesy affair with a hint of Gospel provided by the female backing vocals. One of the simplest songs on the album, it’s also one of the strongest.

The only cover on the album is a rendition of the Tom Waits melancholic piano ballad ‘Picture in a Frame,’ with Stewart remaining fairly faithful to the original.

Great album that Time is it’s not without its flaws.

’Sexual Religion’ carries more than a hint of dance-club pop about it and comes across as ‘Da Ya Think I’m Sexy’ re-imagined as just that.

And the fully orchestrated ballad ‘Pure Love,’ which closes out the album, doesn’t have the gravitas of ‘Brighton Beach’ or the orchestrated power of ‘It’s Over.’
Either of those songs would have made a far stronger closing statement.

Nor would it have hurt to replace ‘Sexual Religion’ with one of the three bonus tracks available to the UK and iTunes edition of Time (the horn backed rock and roll of ‘Legless’ would have been a fine fit).

And for the must-have-it-all collectors, the edition of Time available through the US retail company Target contains three bonus cover tracks, including another Tom Waits tune, ‘Cold Water.’

Time is Rod Stewart’s first No. 1 studio album in the UK for thirty-seven years, setting a new British record for the longest gap between chart topping studio albums by an artist.

But considering the quality of the album, especially when evaluated against Stewart’s decidedly hit and miss material of the later 80s, the plethora of covers in the 90s and the hugely successful but one dimensional crooner compilations of the last decade, it deserves to be a chart topper.

And not before Time.