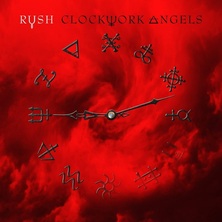 Strong songs, but they didn’t fit comfortably in a set which featured the Moving Pictures album in its entirety plus a host of other Rush classics – the intensity and musical bombast of both 'Caravan' and 'Bu2B' set them apart from the more layered Pictures songs and the pacing of the set-list.

They sounded like they belonged in another Rush world, linked to the band’s past but deserving of having their own future audio environment.

As it turns out that was always the plan and both songs now feature in what may be the band’s most ambitious album to date, certainly lyrically and conceptually.
For this a lyrical and musical exploration of a young boy's adventures in an alternate world of steampunkery, alchemy and clockwork angels.

And Neal Peart didn't just create a lyrical thread to accompany Alex Lifeson and Geddy Lee’s primarily heavy and pretty intense musical soundtrack; he created a full story, some of which can be gleaned from Peart’s narrative text and the other-worldly images by long-time Rush artistic associate Hugh Syme (which form part of the CD booklet).

Even the album cover hints at an alternate time and space.
The U of RUSH is the alchemic sign for amalgamation, the clock numbers are alchemic symbols and the time may point to the alternate future date of Peart’s steampunk world.
The hands are at twelve minutes past nine, but as the narrative text that introduces ‘Caravan’ indicates the boy in the story is watching steamliners pass in the night it’s more accurately 21:12.
Clever.

Such is the scope of the Clockwork Angels story Neal Peart has asked good friend and science fiction writer Kevin J. Anderson to collaborate and write the novelisation.
But that’s only half the story...

As with any Rush album, the music is as important as the lyrics Peart provides and, as Rush are musicians first and foremost (and responsible for a number of truly outstanding instrumentals), probably more so.
As a Rush album, Clockwork Angels most certainly ticks that musical box.

Geddy Lee and Alex Lifeson worked up or jammed a number of the tunes during the Time Machine tour and working so tightly and closely certainly bore musical fruit – a perfect example is ‘The Wreckers.’
The song (lyrically influenced by Jamaica Inn by Daphne Du Maurier) was written by Lee on Lifeson’s Nashville tuned guitar, while Lifeson wrote the bass part. Lifeson’s bass part fitted so well Lee simply learned Lifeson’s part and recorded it for the song.

Writing in such an organic, live fashion clearly helped create the organic, living steampunk and clockwork world as envisaged by Peart.
The album’s opening, introductory sounds create a little bit of that world before the metallic, chiming  bells of approaching steamliners (as depicted in Hugh Syme’s wonderful imagery) give way to the punchy and striking guitar-bass-drum riff and rhythm of 'Caravan.'

'Bu2B' (Brought Up To Believe) raises the sonic intensity a further notch before the title track adds another dimension to the musicality.

'Clockwork Angels' is one of the band’s best ever songs. It’s already a band favourite, guaranteed to become a fan favourite and destined to become a regular feature in live sets.
The song was built from an Alex Lifeson instrumental demo and the change-ups, musical light and shade and the lyrical imagery of Peart’s “celestial machinery” have produced a very Rush-like song, yet with a very different feel to anything they have done before.

String arrangements are used on five of the twelve tracks, forming a musical foil to the intensity of some of the songs and, in the case of 'The Anarchist,' giving sections of the song a very Indian vibe.

Rush purists will be delighted to hear that not only are bass pedals back in the mix, keyboards are used sparingly and not guilty of replacing guitar chords or hogging melody lines (take an overly-complex bow, Signals).
All of which makes Clockwork Angels a Rush album, not just an album by Rush.
And part of the credit for that goes to co-producer Nick Raskulinecz.

Raskulinecz didn’t just help produce the sound of Clockwork Angels, he assisted with the arrangements and helped ensure the band created a classic Rush album. He did much the same with Snakes & Arrows in 2007 which, from the driving introduction and ringing Hemispheres chord of 'Far Cry' to the closing 'We Hold On' is as good a Rush album as you’ll hear.

The band also revisit their past on Clockwork Angels – the fast musical passages of ‘Headlong Flight’ tip their hi-hat and 'Bastille Day' riff to that Caress of Steel classic, while the song itself carries an up-tempo energy that recalls the early days when the working men were finding their way.

Nick Raskulinecz also worked closely with Neal Peart, literally singing drum beat and drum riff ideas to Peart while the drummer created the percussion parts live as opposed to working out detailed, precise arrangements.
Neal Peart is undeniably one of the best rock drummers in the world but in forty-five years of working a kit he’s never played better.

The parts played by Geddy Lee and Alex Lifeson should not be overlooked.
The gritty riffs and intensity of many of the songs mean Lifeson’s melody lines and solos shine even more brightly than usual and Lee has remarked that a number of Lifeson’s solos are brilliant, including on the aforementioned ‘Headlong Flight’ and the final song on the album ‘The Garden.’

Rush are no strangers to softer melodies, little interlude pieces or acoustic based songs but ‘The Garden’ is a true ballad with full string arrangement.
It’s a beautiful change of pace, a perfect epilogue to the album and features Geddy Lee’s best vocal to date.

And then there’s Lee’s bass playing, which seems almost energised as it punches out a bass riff, drives the rhythm or plays counter-point to Lifeson’s own melodic lines.

2112 is a heavy rock sci-fi tour de force; Moving Pictures is the band’s most successful and well received album; musically, Snakes & Arrows is a hell of an act to follow.

But Clockwork Angels is a solid statement and another landmark album in the career of Rush.
And as musicians Geddy Lee, Alex Lifeson and Neal Peart have never played this well.

"I can't stop thinking big" declares the young adventurer on 'Caravan.'
Neither can Canada's most celebrated rock band, it seems.

We have the soundtrack, there will be the novel.
When’s the movie, boys?


The following audio track is presented to accompany the above review and promote the work of the artists. No infringement of copyright is intended.