Giving voice to the blues
​Sari Schorr - A Force of Nature 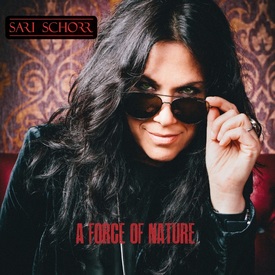 Anyone who has heard or seen the New York based vocal powerhouse in action with her band the Engine Room will know just what a set of blues pipes she has (somewhere between Elkie Brooks on peak power and the raw emotion of Janis Joplin but with very much her own voice).
​
But even with the added bonus of Schorr’s solid and "real life" song writing credentials it’s hard to overstate how good and perfectly titled A Force of Nature is.

Opening with the Robert Cray smooth meets the Tina Turner belt of 'Ain’t Got No Money' (aimed at Wall Street brokers and their insatiable greed) Sari Schorr and a core studio band of Nani Conde (bass), Jose Mena (drums), Julián Maeso (keyboards) and Engine Room band mate Innes Sibun (guitar), make a statement of blues rock intent before going on to underline that statement with the powerful 'Aunt Hazel.'

The latter is a jagged and sassy cry of the blues against the evils of heroin with Schorr on full pipes power; the singer delivers such a blues-wailing vocal towards the end of the song that she probably had to be dampened or intentionally dropped in volume by producer Mike Vernon less the studio glass be shattered.

'Damn the Reason' is a slower but no less powerful number based around the issue of domestic violence; the bursts of crying guitar lines from guest musician Oli Brown play in sympathy to Sari Schorr’s lyric and vocal deliveries.

The lighter and pseudo-funky groove of 'Cat and Mouse' follows before giving way to a striking and hair-raising slave chant inspired version of 'Black Betty.'
Sari Schorr and Innes Sibun lead the southern tinged and highly charged take of the Lead Belly classic, here musically and vocally emoting to such a degree that you’d swear Schorr was channelling the ghosts and the pain of the slave and the whip.

The slow blues 'n' slide of 'Demolition Man' sets a familiar musical tone but the song is given weight by its forthright lyric in support of the move for the decriminalisation of sex work (prostitution).
Sari Schorr’s penchant for double-meaning wordplay is also highlighted by way of her hands-firmly-on-hips delivery of the line "I’m not the kind of woman who is gonna take a stand…"

There’s a hint of smoky jazz wafting through the cool, groove-pop blues of 'Oklahoma' (again featuring the talents of Oli Brown, this time in smooth licks mode) before the blues pop ballad 'Letting Go' adds a touch of poignancy and remembrance to proceedings.
The song, which came almost fully formed to Sari Schorr during a writing session with Mike Vernon while guitarist Quique Bonal strummed out an acoustic rhythm, was touchingly written for Natalie Vernon, late wife of Mike Vernon.

The psychedelically clothed and 60s styled 'Kiss Me' rhythmically and musically steps the album back up a gear; while it carries a more enigmatic lyric it is, like 'Letting Go,' about love for someone now gone.

For all the strength of the original material featured on A Force of Nature the highlight of the album is arguably the fully reinvented, hard blues cover of the 60s soul-pop classic 'Stop! In the Name of Love.'
Sari Schorr puts such a vocal stamp of authority on the number that she all but takes ownership of a song that has been the sole property of The Supremes for half a century.

The idea to bluesify the famous Holland-Dozier-Holland penned number came from Mike Vernon but that’s far from his only contribution to the album.
The legendary producer has done another sterling job at the desk, giving A Force of Nature a full bodied but uncluttered sound with space for the band to breath and the singer to show just how good she is, from the acetylene deliveries of the full-on numbers to the understated but classy vocal on the soft blues/ jazz café closing track 'Ordinary Life.'

And on this form it shouldn’t be too long before everyone else does.