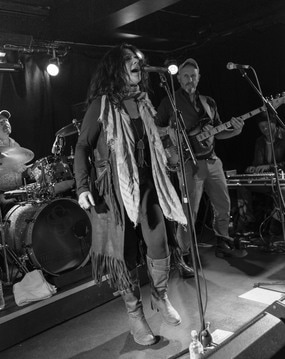 Sari Schorr, delighted to be back in a country she has felt at home in since first visiting some twenty years ago, was equally delighted to find her first foray to Aberdeen as a performer produced a larger crowd than may have been anticipated for a bar venue more used to hosting covers bands than a pedigree blues rock outfit.

But word of mouth, live reputation, Sari Schorr’s heralded vocal skills and the mark made by debut album A Force of Nature (featuring noted six-string blues slinger Innes Sibun) can travel a long way – to the north east of Scotland in this instance.

Bar venues are notorious for having more volume from the bar area than the stage but from opening numbers 'Ain’t Got No Money' and 'Demolition Man' (the band’s rock edge highlighted on the former and Sari Schorr’s hand on hip vocal sass to the fore on the latter), the band had the attention of the arm on the bar counter fraternity.

By 'Where Did You Sleep Last Night,' a fully bluesified version of the traditional American folk song, the bar is doing very little business – but then this is a band that’s hard to ignore, especially when Saris Schorr’s captivating two-voice delivery (portraying the two characters in the song) shares space with Innes Sibun’s electrifying and untethered solo, howling in support of Schorr’s close to operatic vocal step-ups at the song’s finale.

By second cover, Led Zeppelin’s 'Rock and Roll,' the crowd are in full "lonely, lonely time" voice, witnessing the very definition of the song’s title in a blues rocking, modern day setting – the incomparable Innes Sibun going off on one, complemented by the vocal Force of Nature that is Sari Schorr, tempered by the expressive keyboard talents of Anders Olinder and all kept on the beat by the lock-down, water-tight team of Kevin Jefferies (bass) and Kevin O'Rourke (drums).
It should also be noted Messrs Jefferies and O’Rourke bring so much pulsating rhythmic groove to a performance it shouldn’t be allowed out before the watershed.

Other A Force of Nature highlights showcased at Aberdeen included the psychedelically clothed, 60s styled 'Kiss Me' and the set ending 'Aunt Hazel,' a jagged blues rockin’ cry against the evils of heroin that featured Sari Schorr on full pipes power.

There was a genuine worry that the Glasgow show, located outside the city centre with an Underground rail service that inexplicably shuts down at 6pm on a Sunday, competing against a BBC Radio 6 Music Festival event and on the same evening Scotland were playing a World Cup qualifying football match (no sniggering south of the border, please) The Engine Room could well have been playing to an audience that matched the Scotland squad in numbers.

Fortunately, the Cottiers theatre (a converted church that retains the vaulted ceilings, feature stonework and stain glass windows of the original building) played host to a crowd slightly up on numbers from the previous night in Aberdeen, with the added bonus of a great sound and a tidy thirty minute opening set of original material from the Glasgow based quartet Catfish Blues (a band not averse to a bit of self-effacing humour – "We have free CDs with us tonight. Yes, free, which tells you how good the quality is!")

The Engine Room’s Glasgow set was similar to Aberdeen but with a four song variation (additionally, Sari Schorr has an inherent sense of each audience and the atmosphere of a given show; the results are a couple of on-the-fly set deviations each night, tailored to fit the vibe of the gig).

At Cottiers, having recognised a genuine blues crowd, Sari Schorr left the stage half way through the set to allow Innes Sibun to lead the band through the Freddie King guitar romp 'Hideaway' before the singer returned to the stage for an outstanding version of T-Bone Walker’s 'Stormy Monday' (the guitar and organ keyboard solos from Innes Sibun and Anders Olinder deservedly receiving two of the biggest ovations of the night). 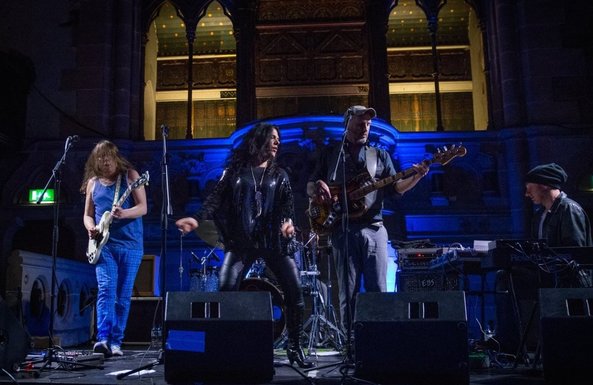 ​By way of lighter relief the band unwound with the jazz-blues non-album track 'Don’t You Call My Name.'
The song was also performed at Aberdeen but in the wider spaces of Cottiers Sari Schorr was free to walk through and around the crowd sans microphone, the depth and power of her voice highlighted and underlined by scat lines that comfortably matched the volume of the mic’d up chorus vocals from the band.

As excellent as the slightly compressed set was (curfews; gotta love ‘em), the encore trumped what had gone before.

The beautiful and genuinely heartfelt ballad 'Ordinary Life,' which could as easily be titled The Gratitude Song, was performed on the night with a vocal that sat balanced on the razor-thin edge between emotional zenith and breaking point; every ounce of the individual that is Sari Schorr was expressed through the lyric and its delivery.

Culminating with a final line note hold that filled the theatre’s vaulted ceilings with soulful resonance, Sari Schorr, in the company of her Engine Room band of brothers, closed out her first ever show in Glasgow with a song, and set, that will long be remembered by those in attendance.