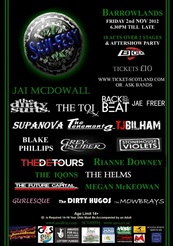 On November 2nd 2012, three days before Guy Fawkes Night, the charitable organisation SAVI will create some musical fireworks with their SAVI-Fest event at The Barrowlands in Glasgow.

After the success of last year’s show, SAVI-Fest has established itself as a noted Scottish musical event that – with continued support and effort – will be an annual occurrence.

SAVI are a registered charity operating out of East Kilbride and the initialised name stands for Sexual Assault Victims’ Initiative.

SAVI was borne out of one family's tragic experience relating to that most horrific of crimes and the organisation's modus operandi includes on-going efforts to create change within the legal system, helping young victims cope with the aftermath of sex attacks and to keep those victims and their families strong and informed throughout recovery and while awaiting the trial processes.

The latter may well be the most important aspect of SAVI as there can be prolonged waiting periods before trial proceedings.
Victims and their families can be totally alone at such times.
That gap in the support services system is primarily why SAVI was established.

SAVI also offers further support by way of a buddying system and a 24/7 manned helpline, but all SAVI personnel are volunteers and give their time freely because this is a charity organisation.
They therefore need all the donation, support and financial assistance they can get.

Live music is certainly one of the most exciting and entertaining ways to help provide that support and the artists who give of their time to perform, the backing of the musical media and the commitment of those who buy the tickets and come along to enjoy great music is of primary importance.

Eighteen acts will perform across two stages with a host of noted Scottish artists on the bill.

The headline act is singer and recording artist Jai McDowall, winner of Britain’s Got Talent in June 2011. McDowall performed at the Royal Variety Performance and released his debut album, Believe, later that year.

Other acts include Supanova, Scotland’s very own boy band and The Detours, the energetic alternative rockers who are no strangers to sell-out shows in Glasgow.

The second stage will play host to a number of young or up and coming pop, indie and rock-related acts, including singer songwriter TJ Bilham, the Stonehouse Violets and The Iqons.

All of which guarantees a great night of musical entertainment.
And all for a great cause.

Scotland has a healthy supply of good, new musical talent coming through right now and many such acts will be performing at SAVI-Fest.

The tireless work of SAVI should be applauded and, hopefully, a packed Barrowlands will be applauding the bands that come to perform at their event on the 2nd November.

There really is no excuse – tickets are only £10.00 and, as a nation, we Scots are supposed to love a bargain...

To find out more about SAVI or make a donation, please visit the SAVI website:
http://www.savi.co.nr/