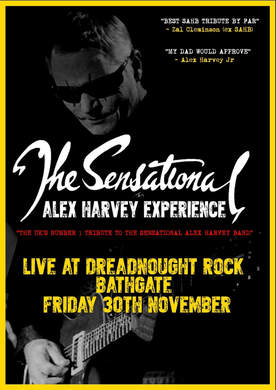 If you want to celebrate one of Scotland’s most favoured and famous rock and roll sons and the Auld Country’s official national day, it’s hard to think of a better way to do it than being entertained by the Sensational Alex Harvey Experience on St Andrew’s night – and, as icing on the rock cake, at Scotland’s longest running rock club, the DreadnoughtRock.

It was also gratifying to see and hear a packed out ‘Nought giving it plenty of sing and chant-a-long (with many a drink in the air) gusto as the honorary sainted Alexander James Harvey was paid tribute via SAHE front man Andy Massie, a singer and performer who is "well kent" north of the border for not just SAHE but as the voice of another excellent tribute band,
Dr Feelguid (in his alter ego of Andy Brilleaux).

At the 'Nought Andy Massie was in his Alex Harvey-framed (no pun intended) element, in look (darkening his hair, wearing the traditional Harvey guise of hooped top, long coat and hip swaying cane-in-scabbard), voice (a mix of his own vocal and Harvey’s Scottish drawl / rolling vowels, as highlighted on 'The Last of the Teenage Idols' and 'Framed') and classic Harvey stage quips (its unwritten Scots Law that any Sensational Alex Harvey Band based show must start with "Good evening, boys and girls…")

But, as with the SAHB, SAHE are about far more than the man at the microphone.

Face painted guitarist and backing vocalist Willie McGonagle had those thick and gritty Zal Cleminson chords and riffs sonically nailed, as showcased on the double Moses helping of the swampy 'Amos Moses' and the band's hard kickin' rendition of 'Midnight Moses.' McGonagle was equally biting on his solos. 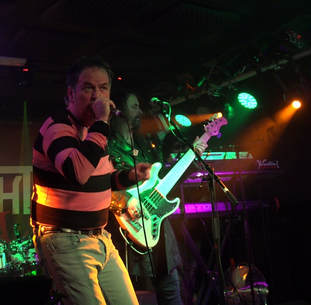 Andy Massie and Nelson McFarlane, two fifths of the "best SAHB tribute by far."
​Hugh McKenna, whose keyboard flourishes and song arrangements were as much a part of SAHB as Alex Harvey’s distinct voice and lyrics, is ably played by keyboardist and backing vocalist Dave Cowan (complete with mid-70s McKenna ‘hair and shades’).
The synth bursts and piano keyboard lines from Cowan (who is not just influenced by Hugh McKenna but a genuine fan) were, frankly, SAHBtastic.  ​

Not to be outdone, the SAHE rhythm section did their best Chris Glen and Ted McKenna impression across the entire ninety minute DreadnoughtRock show.

Latest SAHE recruit, John McAvoy, who has been performing with the band for around a year, is a fine sticks man whose big beats and percussive panache recalled the great Ted McKenna in his SAHB days.

Nelson McFarlane, for his bass playing and backing vocal part, need only show his current CV of playing in five bands (of very differing styles) to indicate how accomplished a player he is and how good a four (make that five) string fit he is for SAHB rock as performed by SAHE.

From powerful set opener 'Faith Healer,' 'Give My Compliments to the Chef' and deeper but no less impressive cut 'The Dolphins' (the holy rock trinity of SAHB greats) through to the "Yo Ho Hoh"s of the Robert Louis Stevenson inspired 'Tomahawk Kid,' a rollickin' 'St Anthony' (knocking St Andrew into second place for six minutes) and all finished off by SAHB's super social justice hero Vambo coming to our rescue in 'Hot City Symphony' (including a suitably attired Andy Massie during 'Man in The Jar') this was, as the name suggests, the ultimate experience of what the Sensational Alex Harvey and his band were all about. 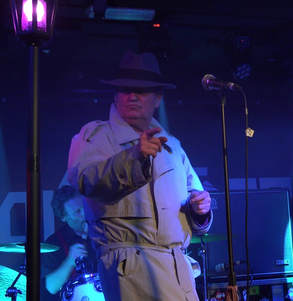 The Massie man in the Jar
Not that you need take FabricationsHQ's word for it – Zal Cleminson (whose soundtrack metal outfit /sin’dogs/ feature Messrs Cowan, McGonagle and McFarlane) has stated this is the "best SAHB tribute by far" while Alex Harvey Jr reckons his dad "would approve."

Which leads, after a closing one-two sing-a-long encore punch of 'Boston Tea Party' and 'Delilah,' to the bands of the past, and those sadly passed, summation.

SAHE help fill a void left by SAHB but most certainly don’t replace a band who were, and are, utterly irreplaceable in their uniqueness and progressive rock and roll theatrics.

The late and great Alex Harvey would indeed approve but, further, you can’t help but think that roguish, gap toothed grin would be all the wider knowing his biggest success in rock and roll is still being revered and showcased some four and a half decades on.

Because with The Sensational Alex Harvey Experience, Vambo – and Alex – still rool, OK?