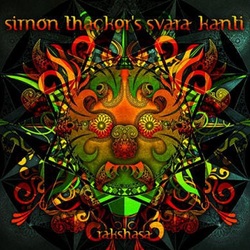 A fusion of styles; the integration of different instrumentation or musical forms; incorporating rhythmic and harmonic elements from the music of different cultures...

None of the above is new, whether a relatively simple medley of mash-ups or the complexity of diverse musical combinations, but Rakshasa, the latest project from noted Scottish musician Simon Thacker, has taken the latter to a whole new creative and artistic level.

Simon Thacker’s previous Indian themed project, the Nava Rasa Ensemble, was an acclaimed adventure featuring two guitar concerti for nine performers; Svara-Kanti have a more intimate yet no less dramatic musicality.
The quartet are seemingly able to explore even more tonal expressions, delivered by solo or collaborative instrumentation and accompanied on a number of the tracks by the captivating voice of Japjit Kaur.

Thacker introduces both himself and the opening number ‘Dhumaketu’ by way of some Flamenco styled, improvised guitar work before the heavily rhythmic yet melodic interplay of violin, guitar and tabla take centre stage.

The beautiful and haunting voice of Japjit Kaur then takes the spotlight on Ether-Akasha, the first movement of ‘The Five Elements’ (written by British composer Nigel Osborne), backed by the subtleties of the three instruments and some ethereal (as befits the song and its title) violin lines from Jacqueline Shave.

Japjit Kaur also features on the other four movements, all of which are based on specific ragas (a melodic and rhythmic mode of Indian classical music). Each captures the feel or characteristic of the elements in question – Air-Vayu, Water-Jal, Fire-Agni and Earth-Prithvi.
With no pun intended, each performer is very much in his or her element on the five movements, especially Kaur and Simon Thacker. The latter’s brilliant, expressive abilities on guitar bring both delicate touches and angrier, intentional dissonance to proceedings – right on the raga edge, if you will.

American composer Terry Riley’s long-form piece ‘SwarAmant’ is the perfect showcase for guitar, violin, tabla and their interaction; the musical influences borrow from Spanish, Latin-esque and Gyspy-folk motifs, amongst others.

The second half of the album is no less impressive, best described perhaps as showcasing the more traditional sounds of Indian music within a fusion of other influences or contemporary re-imagining.

’Anusvara – 6th Prism,’ by Indian composer Shirish Korde, is performed by the entire quartet and is based on the North Indian system of ragas (specifically a six note raga) while Simon Thacker’s ‘Svaranjali’ and ‘Multani’ carry, respectively, an almost contemporary fast blues musicality and a rhythmic intensity that could easily be transcribed or rearranged for rock-fusion instrumentation.

The title track closes out the album and is unlike anything else that has come before.
A Rakshasa is a shape-shifting magician and warrior goblin (or demon) found in Hindu and Buddhist mythology; the title track captures the essence of the usually malevolent little bugger perfectly.
Opening with, and backed by, multi-tracked forwards and backwards instrumentation, waterphones and Tibetan singing bowls, the eeriness of the demonic track is punctuated by jagged guitar, sparse notes and frantic bursts of tabla from Sarvar Sabri.

Rakshasa is perhaps not the sort of album you would expect to see reviewed on a rock-orientated site, but FabricationsHQ champions many other musical genres including Scottish/ Celtic folk and jazz fusion.
And, in its own way, Rakshasa is very rock and roll – with good reason...

Simon Thacker’s formal training may have been in classical and jazz but his earliest loves and influences were heavy metal, rock guitar and pre-war blues, confirmed when the gifted guitarist spoke to FabricationsHQ around the time of Rakshasa’s release:
“When I'm composing with ragas and complicated time cycles there are still those influences.
"Some ragas contain the pentatonic and (parts of the) blues scale within them, but then it’s almost like the rug gets pulled from under you when they resolve!
"My ‘Multani’ raga contains a lot of those sorts of gestures and rhythmically you could see it as extending some of the more intricate rhythmic interaction you get in metal – but if you're coming at it from an Indian perspective you'll hear it as a supercharged time cycle.”

In summary?
Classical Gas meets Bollywood this most certainly is not; anyone looking for that sort of clichéd commerciality can jog on.

Rakshasa creates musical sound-scapes that range from the accessible and comfortable to the complex and challenging; it is an album rich in musical vibrancy and colour yet contains some quite stark black and white textures.

It’s also an exceptional piece of work – in any culture.