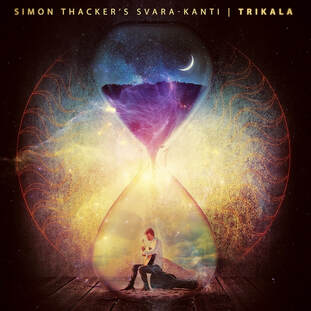 In the creation of what FabricationsHQ has no hesitation in calling not world music but new world music, formed through an intricate yet vibrant meeting of musical cultures, highly accomplished Scottish classical guitarist and boundary breaking composer Simon Thacker has also created a dilemma for those of us who try to express what that music conveys, or sounds like, through the written word.

Or at least those of us who genuinely become immersed in such musical soundscapes and cross-cultural textures, because with an album such as Trikala (a Sanskrit word for the three tenses of time, past, present and future, a perfect summation of the concept and philosophy of Simon Thacker’s latest work) you don’t just listen once or twice, pick a highlight and slap a genre-style label on it,
especially not one of this magnitude (Trikala is epic in its 2CD and 138 minute scope, musical undertaking and meeting of musical minds (thirteen musicians and singers, including some of the finest in their traditional instrumentation fields, contribute).

The aforementioned tracks set the sound-tone of CD1 (there's also a beautiful solo guitar reinterpretation of 'Vande Mataram,' adopted as India’s National Song in 1950), which closes out with two long-form pieces, 'Beyond Mara' and 'Nirjanavana' (progressive world music? Believe it).

The two-part 'Beyond Mara,' featuring Simon Thacker, Jaqueline Shave and brilliant tabla player Sukhvinder Singh Pinky (a power-trio in their own world music right) is the fluidic rise and fall, light and dark centrepiece of Trikala (something Thacker confirms in his highly detailed essay within the 40 page album booklet).
'Nirjanavana' is Simon Tacker at his virtuosic best – a semi-improvised, nine-minute solo guitar piece with digital delay.

CD2 carries a more traditional tone (all but one of the numbers are a reimagining of pieces that originate from the mystical folk Baul traditions of India and Bangladesh) built around a mix and meld of classical guitar, tabla, khomok (a Baul string instrument) and voice.

Featured singers Raju Das Baul (who plays the khomok) and Farida Yesmin (who is particularly captivating in her performances) represent the Indian and Bangladeshi variants of the Baul folk culture, respectively.
Collectively however the pair become part of a sequence of songs (complemented by the classical guitar, khomok and tabla instrumental piece 'Prabhava') that unify Bengal folk traditions through their contributions and Simon Thacker’s fully reimagined arrangements.

CD2 could be perceived as a contemporary take on the traditional and one that complements the more adventurous, original material on CD1 but the reality is that, fittingly for an album called Trikala, the musicianship on display (and the interplay), the remarkable body of work on CD1 and the more traditionally rooted material (but with inspired rearranging) on CD2 are another form of the Power of Three at work.

In earlier ensembles and composition Simon Thacker could be seen and heard to be fusing or re-interpreting world-cultural music through classical guitar and traditional forms of instrumentation.

Further, through the aforementioned releases and captivating live performances (whether solo or ensemble) Simon Thacker has made us broader and more culturally appreciative listeners – and, one hopes, even better writers.