On the Crest of a Poptastic Wave
Sons of the Sea 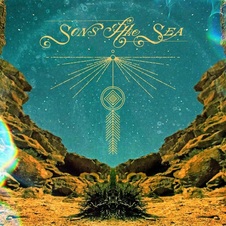 Outside of the obvious perk of receiving an awful lot of music for consideration, the most gratifying part of a reviewer’s job (certainly this reviewer) is when an album or EP comes out of left field and catches you unawares with just how good it is.

It might also put a smile on your face or include a never-heard-that-coming surprise element; maybe it’s a musical breath of fresh air in this stale age of marketable commodity over musical creativity.

Brandon Boyd is the voice and front man of Incubus, the American band who evolved from funk metal/ rap metal beginnings to become a more straightforward yet still musically diverse (and impossible to pigeonhole) multi-platinum, alternative rock act success.
And that’s a neat trick in an era where mediocrity sells.

Incubus don’t particularly rock my Muirsical world (one man’s meat etc.) but 2011’s If Not Now, When? was an interesting and accessible album that featured slow-tempos and simpler musical structures.

The Wild Trapeze, Brandon Boyd’s 2010 debut solo outing, featured a more open and sparse sound but it certainly didn’t predict the path that would be travelled by Boyd and his Sons of the Sea project.

The eclectic pop of album opener ‘Jet Black Crow’ makes it clear this is not The Wild Trapeze Part 2 or Incubus Lite, confirmed beyond doubt by the infectious harmonies of ‘Space and Time,’ (which featured on the 2013 four-track EP Compass).

But it’s not a one man band of creativity – Sons of the Sea is a collaborative project between Boyd and renowned producer/ mixer/ musician Brendan O’Brien, who has worked with everybody from Bruce Springsteen to Limp Bizkit.
O’Brien has also been Incubus’ producer since their 2004 album A Crow Left of the Murder.

All songs on Sons of the Sea were written and performed by Boyd and O’Brien (the latter also produced the album), with the pair describing what they have created as "oddball pop."

While that’s a fun and fairly accurate description of a song such as 'Untethered' and its mix of rhythmic verse and melodically charged chorus, there are instances of purer forms of pop at its most intelligent – 'Where All the Songs Come From’ could be later-period (Gouldman & Stewart) 10cc.

‘Come Together,’ the first single to be lifted from the album, carries a mid-tempo seductivity that demands airplay and deserves mainstream and pop chart success.

‘Lady Black’ is an atmospheric piece of synth-driven pop that many a contemporary pop artist would have given their eye teeth to have written.

The piano-led ‘Avalanche’ is Brandon Boyd’s lyrical explanation of his creative processes while ‘Great Escape’ is as close to Incubus as the album gets, but disguised in heavy-pop clothing.

Acoustic versions of ‘Space and Time,’ ‘Come Together’ and ‘Lady Black’ are included as bonus tracks.
All three are worthy additions to the album with each adding lighter pop-based colours to the Sons of the Sea canvas.

As the diverse material from Incubus proves, Brandon Boyd is a versatile singer.
With Sons of the Sea the songs and arrangements almost demand a ‘poppified’ voice and Boyd obliges by putting his upper register up front and centre of the mix; and to fine effect.

Brendan O’Brien has added yet another fine production job to his ever expanding list of successes.
The songs have a layered sound that is structured and never cluttered; the album itself could be described as ‘headphone music,’ producing a listening experience that brings out the sonic nuances to the full.

With Sons of the Sea Brandon Boyd and Brendan O’Brien have produced a poptastic and captivating album full of quirky charm and musical eccentricity.

But, more importantly, it proves pop music can be fun, creative and intelligent in the 21st century.
And I’ll be Biebered if I saw that coming.