Safe in The Knowledge…
Squeeze (with Nine Below Zero), The Royal Concert Hall, Glasgow, 3rd November 2017 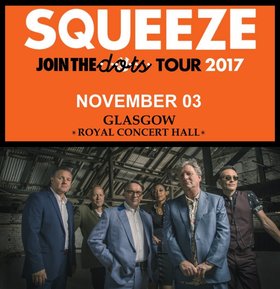 "Ladies and gentlemen, please be upstanding for Squeeze…"

The fact that the sold out and seated Royal Concert Hall audience didn’t follow the request-come-song-introduction (accompanying the on-screen Google search-wiki result for each member of the band) was more to do with the majority of the crowd having just settled in to their seats after the thirty-minute break that followed the set from special guests Nine Below Zero than it was any sort of  ambivalence towards Squeeze; proof of which was provided by the volume of applause and appreciative whoops that welcomed the band on to the stage.

Nor was there ever any worry that the fun clearly being had by each member of Squeeze (ever-presents and songwriting team extraordinaire Glenn Tilbrook and Chris Difford, drummer Simon Hanson, keyboardist Stephen Large and latest recruits, percussionist Steve Smith and bass player Yolanda Charles) wasn’t reciprocated by the audience – following 'Please Be Upstanding' (the up-tempo, great advert for Viagra number from latest, and best to date, studio album The Knowledge), the first of a dozen full-voiced, Weegie Chorus sing-a-longs took place as 'Pulling Muscles (From the Shell)' entered the fray.

Squeeze however are well aware their later body of works (the aforementioned The Knowledge; 2015’s Cradle to the Grave) match or better what came before; the set was therefore liberally peppered with new material, shunning the all-too-easy and all-too-familiar Greatest Hits sets that so many reformed or reimagined rock and pop outfits are happy to deliver for audiences that are equally happy to accept.

Prior to Squeeze taking the stage British rhythm and blues band Nine Below Zero, good friends and musical contemporaries of Squeeze, put on a similar but obviously shorter set of back in the day favourites (the punky rock and roll of 'Eleven Plus Eleven;' the rapid fire R&B of 'Don’t Point Your Finger at the Guitar Man') with material from the group’s latest offering, 2016’s excellent big band styled covers album, 13 Shades of Blue.

While the 13 Shades songs performed, opener 'Don’t Lay Your Funky Trip On Me' and R&B soul number 'Play That Song (You Lied)' were definite highlights, it was the more traditional blues of 'Stormy Monday' that was the cover of the set.
Featuring Charlie Austen on lead vocals, the classic blues standard showcased stand-out solo breaks from Dennis Greaves, Mark Feltham and Chris Rand.

A Nine Below Zero bonus for their Glasgow fans came by way of confirmation from Dennis Greaves that the band hope to be back in the city next year to play King Tuts again, Glasgow’s favoured music club venue, with Charlie Austen playing an acoustic set as guest opening act; it also led to his best quip of the night:
"We love King Tuts. I mean this is all right, but it’s not a real gig unless your feet stick to the stage, is it?"

An hour and more later, four of the Nine Below Zero musicians returned to the stage at various points to play their part in making the Squeeze set such a resounding, and full-sounding, success.

Paul Jordanous and Chris Rand added their brass playing skills to half a dozen Squeeze songs including three from The Knowledge – the charming 'Patchouli,' the more serious 'A&E' (championing the cause of the much maligned NHS) and 'Rough Ride,' its fully funked up musicality contrasting with its damning lyric on austerity and the more impoverished areas of London (the song was accompanied by synchronised video featuring the Lewisham & Greenwich NHS Choir and opera singer Cara McHardy, who appear on the studio version).
​'Rough Ride' also featured some funktastic five-string bass work from Yolanda Charles, who damn near plucked the strings right off the body of her bass guitar, such was the punchy groove and drive of her playing.

The mid-set Cradle to the Grave brace of the infectious title track and 'Nirvana' (the song’s accompanying Difford & Tilbrook as husband & wife video as quirky and fun as the song is soul-pop smooth) heralded in the start of the hits and a Glasgow Royal Concert Hall crowd on its feet for the duration, singing along to a clutch of the band’s brilliantly crafted chart successes.

Just about every Squeeze classic was present and correct, or cleverly reinterpreted – 'Another Nail in My heart;' 'Tempted' (all blues swing under pink lights; the visual highlight of the night); a semi-acoustic, military drum driven 'Take Me I’m Yours;' what’s best described as the "Caribbean Mix" of 'Goodbye Girl;' the Chris Difford led 'Cool For Cats' (Difford’s distinct bass vocal remains the perfect backing and harmony foil for Tilbrook’s own vocal, on fine form throughout and enhanced by the two and four-part backing vocals from the rest of the band.

The sing-a-long successes were interspersed with album track numbers including the spacey 'Departure Lounge,' the pacey, acoustic 'Albatross' (both from The Knowledge) and the rockier and edgier 'Wicked and Cruel' from 1991’s Play (told you they weren’t all about the hits).

While those deeper cuts were a welcome inclusion there was never any question or doubt what the closing numbers would be, or the encore double that followed.
'Up the Junction' and 'Labelled With Love' (the latter featuring some truly wonderful harmonica playing from Mark Feltham) had the crowd in such full voice they came close to drowning out the band before 'Slap and Tickle,' featuring Dennis Greaves, took us all the way back to the band’s new wave pop beginnings.

Encore numbers 'Is That Love' and a fabulous R&B horns, big band soul-swing arrangement of 'Black Coffee in Bed' (vociferously appreciated by an "of an age" audience who still enjoy, and more importantly know, what a black coffee is – you can shove your spiced, non-fat, caramel flavoured latte with cinnamon sprinkles where the sun don’t shine, kids) brought an outstanding show to an outstanding end.

Two evenings before Guy Fawkes had his annual night to remember, remember Squeeze, in the shape of Chris Difford, Glenn Tilbrook and a quartet of superlative musicians, had their own fireworks night.
They put on a show of melodic snap, rhythmic crackle and sophisticated pop that, in the company of their mates Nine Below Zero, made for one of the most entertaining and as close-to-perfect performances (with an excellent sound and mix) as will be seen or heard on the 2017 touring circuit.

"Ladies and Gentlemen, please be upstanding for Squeeze…"

Because you can be safe in The Knowledge that they don’t match who and what they were back in the new wave and creative popcraft day – live, they far exceed it; to the point of being exceptional.