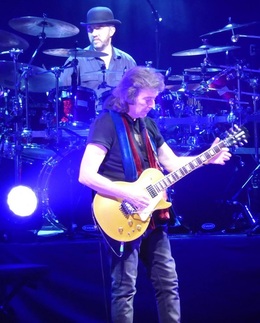 2015 has been quite the year for Steve Hackett, his fans and those with a progressive penchant for his time with Genesis...

Earlier this year the noted guitarist released Wolflight, his most accomplished and striking multi-genre work to date.
The album also helped celebrate Steve Hackett's 40th anniversary as a solo artist, as does the just-released Premonitions, a 14-disc set that covers Hackett’s Charisma label recordings from 1975 to 1983 and includes a whole raft of previously unavailable material.

The icing on the 40th (solo) Birthday cake however was the announcement and subsequent undertaking of Steve Hackett’s Acolyte to Wolflight with Genesis Revisited European and UK tour, which arrived at Glasgow’s Royal Concert Hall on the 18th of October.

And it arrived in style.

A powerful version of Steve Hackett’s classic and melodically graceful 'Spectral Mornings' opened the show with a sonic vibrancy; the striking instrumental was followed by an equally powerful version of 'Wolflight'
(the title track of Hackett’s latest solo album is musical tour de force of light, shade, musical change-ups and interesting instrumentation that on the night carried the gravitas of its studio counterpart).

Shortly after the one-two opening punch Steve Hackett confirmed the show would be split into two sets, the first featuring songs from his first three solo albums (Voyage of the Acolyte, Please Don’t Touch!, Spectral Mornings) and Wolflight, with the second set a truncated version of the highly successful Genesis Revisited shows.
​
While the entire show was a Musical Box of treats for the audience it was particularly gratifying for this fan and reviewer to note the cheer for the announcement of the Genesis set was bettered in decibel level by an across-the-audience roar for the mention of an entirely solo set, confirming just how highly Hackett’s diverse and large body of solo work is regarded.

Post-announcement Steve Hackett, for the most part, let the music do the talking – and it spoke volumes, from the progressive polished pop of 'Everyday' and the acoustic-based Wolflight song 'Loving Sea' to the darker yet heavily melodic 'Love Song to a Vampire' and a version of 'Icarus Ascending' that featured Genesis Revisited singer Nad Sylvan.

Sylvan (who has a natural tonality somewhere between Peter Gabriel and Phil Collins) brings his own physicality and presence to the Genesis repertoire but he also played his part on 'Icarus' (dedicated on the night to Scottish singer Jim Diamond, who sadly passed away earlier in the month) and 'Star of Sirius,' his voice blending well with Steve Hackett’s on the fan favourite Voyage of the Acolyte number.

'Star of Sirius' also marked the start of the end of the first set, setting up a 20 minute song-by-song Acolyte medley that featured 'Ace of Wands,' 'A Tower Struck Down' and the full-on crescendo of sound that was the closing section of 'Shadow of the Hierophant.'

While Steve Hackett is the focal point of the shows, bathed front and centre in the wolflight of his music and the spotlight of the lighting rigs, he is more than ably assisted by an exceptionally talented band.

Long-time Hackett band members and album contributors Roger King (keyboards), Gary O'Toole (drums, additional lead and backing vocals) and Rob Townsend (saxophone, flute, percussion, backing vocals) are outstanding musicians collectively and individually (Townsend adding some freshness and jazz-tinged panache to many of the Genesis numbers), while the aforementioned Nad Sylvan has become such an integral and vocally vital part of the Revisited sets it’s now hard to think of the songs in their current live forms without him.

Bringing some solid bottom end and punchy four-string remarks on this tour is Roine Stolt, best known for his guitar skills, being the power behind Swedish progressives The Flower Kings and as one quartet of prog supergroup Transatlantic.
The multi-talented Stolt (bass, 12 & 6 string guitars, backing vocals) is therefore not exactly an unknown in progressive rock circles but it was probably just as well Steve Hackett introduced him early in the show – up to that point the uninitiated must have thought Geddy Lee was guesting on this tour (albeit with dyed blond hair) such is the resemblance.

Classic Genesis material and Steve Hackett’s Revisited shows take care of themselves but suffice to say it was a strong, well-balanced and superbly performed set.
And while songs such as 'The Musical Box' and show closer 'Firth of Fifth' are mandatory inclusions (a set without them would demand a Progressive Public’s Enquiry), it was particularly pleasing to hear the hardly-ever-performed (by Genesis) 'Can-Utility and the Coast Liners' and a version of the instrumental 'After the Ordeal' that featured some dexterous interplay from the six-string fingers of Steve Hackett and Roine Stolt.

Yes, 2015 has been quite the year for Steve Hackett.

And it was quite the Steve Hackett show for an appreciative and musically satisfied Glasgow audience who, on the night, got the best of both of Hackett’s musical worlds.